Arrow Video has only two Blu-rays coming out for March, but both of them are essential viewing for cinephiles as they take us from a gangster run midwwest city to a confusing love triangle in the woods. Kansas City was part of Robert Altman’s arthouse comeback in the wake of The Player and Short Cuts. Altman brings to life the Kansas City of his youth that’s not exactly the city of clean living. Everyone seems to be willing to bend the rules to survive. Blondie O’Hara (Fast Times At Ridgemont High‘s Jennifer Jason Leigh) discovers that her low level crooked husband (Dermot Mulroney) has been taken hostage. The guy who ordered him nabbed is powerful gangster Seldom Seen (Harry Belafonte). This leads Blondie into going something extreme when she pulls a gun on a politician’s wife (Blackadder ‘s Miranda Richardson). The film mixes the violence and desperation of the Jazz age with fine jazz bands playing in the Kansas City clubs. Altman allows us to get lost in this era.

Speaking of getting lost, The Passion of the Darkly Noon marked the return of director Philip Ridley. His film The Reflecting Skin was always checked out from the cult section at Vizarts. His second big film brought serious star power when Brendan Fraser (Gods and Monsters), Ashley Judd (Heat) and Viggo Mortensen (Lord of the Rings) team up in the woods. Darkly Noon (Fraser) is dealing with his cult breaking up after a ugly incident. He wanders the North Carolina woods until he’s discovered by a couple that nurse him back to health. Things get twisted when he has deep feelings for the wife (Judd). The weirdness keeps building as the relationships unravel. Also in the film is Grace Zabriskie from Twin Peaks. This feels like the first real release of The Passion of Darkly Noon since it didn’t get much attention back in 1995.

Here’s the press release from Arrow Video with details of the bonus features:

Arrow Video brings the first quarter of 2020 to close with two new releases that are sure to make cinephiles everywhere giddy.

Coming to Blu-ray on March 3rd is Robert Altman’s mid-’90s thriller, Kansas City. This Depression-era gangster flick set in the midwest was praised by the legendary Roger Ebert for its “originality and invention.” The film brilliantly mixes a narrative about crime lords and shady politics with what amounts to live concert footage from the day’s best living jazz musicians. The star-studded cast includes Jennifer Jason Leigh, Harry Belafonte, Dermot Mulroney, Miranda Richardson, and Steve Buscemi. Kansas City makes its Blu-ray debut with an assortment of bonus content.

Sticking with the mid-’90s theme, Arrow will release The Passion of the Darkly Noon on March 24th. Written off on its initial release, this film from director Philip Ridley has developed a cult classic as overlooked and underrated gem. Brendan Fraiser gives a sensational performance as a young man that descends into a destructive rage after the death of his ultra-religious parents. Viggo Mortensen and Ashley Judd co-star. Featuring a brand-new 2K restoration taken from the original camera negative, and approved by Ridley, this marks The Passion of the Darkly Noon‘s worldwide Blu-ray debut. 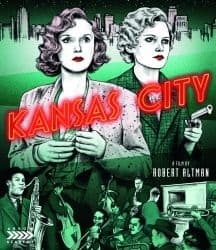 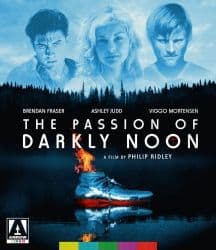 The Passion Of Darkly Noon
The Desire… The Obsession… The Nightmare…
IF YOU GO DOWN TO THE WOODS TONIGHT… Described by critic Mark Kermode as an “extraordinary filmmaker” and “one of the UK’s most imaginative talents”, visionary British director Philip Ridley followed his sensational debut The Reflecting Skin with another surreal incursion into the dark heart of the ‘American dream’ in The Passion of Darkly Noon. Darkly Noon (Brendan Fraser) is the sole survivor of a military-style attack on an isolated religious community. Stumbling through a forest in a daze, he is rescued by the free-spirited and enigmatic Callie (Ashley Judd). Darkly finds himself feeling strange new desires for Callie as she nurses him back to health… only to watch her jump into the arms of her returning mute lover Clay (Viggo Mortensen). Lost in the woods with only his fundamentalist upbringing to make sense of his unrequited passions, Darkly soon descends into an explosive and lethal rage. Now available for the first time worldwide on Blu-ray™, Ridley’s talent for spellbinding, hallucinogenic dream imagery is on full display in a glittering new transfer of his most formally inventive and electrifying film. The mesmerising soundtrack includes two songs co-written by Ridley for the film, “Look What You’ve Done (To My Skin)” performed by Gavin Friday and “Who Will Love Me Now?” performed by PJ Harvey.
Bonus Materials
New 2K restoration by Arrow Films from the original camera negative, approved by Philip Ridley
High Definition Blu-ray™ (1080p) presentation
Original 5.1 and 2.0 DTS-HD MA audio
English subtitles for the deaf and hard of hearing
New audio commentary by writer/director Philip Ridley
Isolated score track in lossless stereo, including never-before-heard extended and unused cues, and the two songs from the film
Sharp Cuts, a newly filmed interview with editor Leslie Healey
Forest Songs, a newly filmed interview with composer Nick Bicât
Dreaming Darkly, an archive featurette from 2015 featuring interviews with Ridley, Bicât and star Viggo Mortensen
Previously unreleased demos of the music score, written and performed by Bicât before filming started
Theatrical trailer
Image gallery
Reversible sleeve featuring new and original artwork
FIRST PRESSING ONLY: Illustrated collector’s booklet featuring a new Philip Ridley career retrospective written by Alexandra Heller-Nicholas