Hawkwoman Remembers Her Past Lives Including On Superman’s Planet Krypton!

For a who’s who of these Hawkwomen it appears that Hawkworld has a lot of them named here. In addition, that last image is a nice companion to the same revelation for Hawkman in the first issue of this series (full spoilers here). 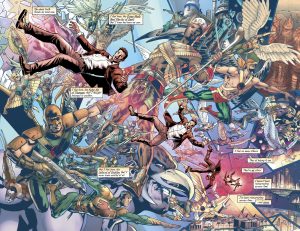 We later learned that Hawkman’s Kryptonian self was named Catar-Ol and he got his own spotlight issue (full spoilers here).

For all of the Catar-Ol appearances we’ve been able to locate visit here.