Hi. My name is Vincent and I used to do Live Raw Reports at Inside Pulse. For a few weeks. But it still counts.

I recently went to a local wrestling show in Evansville, Indiana at the historic Veterans Memorial Coliseum. This location has had a good number of legends pass through the doors throughout the years with numerous promotions. I have already been to a show here in the past but wasn’t that impressed with it before this one. But by the Facebook group, it looked a bit more professional in appearance.

The promotion’s name is World Wrestling Alliance (WWA) and is based out of Western Kentucky with occasional jaunts up to Indiana. The show is called “The War” and contains what is promoted as “Indiana’s Biggest Battle Royal,” and who am I to question this as it would be interesting to research if this were actually true or not. It has advertised former WWE Superstar The Boogeyman as well as an appearance by Tracy Smothers who has recently been diagnosed with cancer, having had his first chemo session earlier in the day. THAT is commitment. Other than that, all star power seemed to be coming from the local talent which includes the owners Ray and Chris Waddell.

The doors were set to open at 5:30 that night for a start time of 6. However, that time came and went as half-hearted attempts at chants and clapping waned as time went on. Also decreasing was the room inside of the lobby as the doors were opened for the lines to continue to the outside. This at least told me that the organization has local draw power. 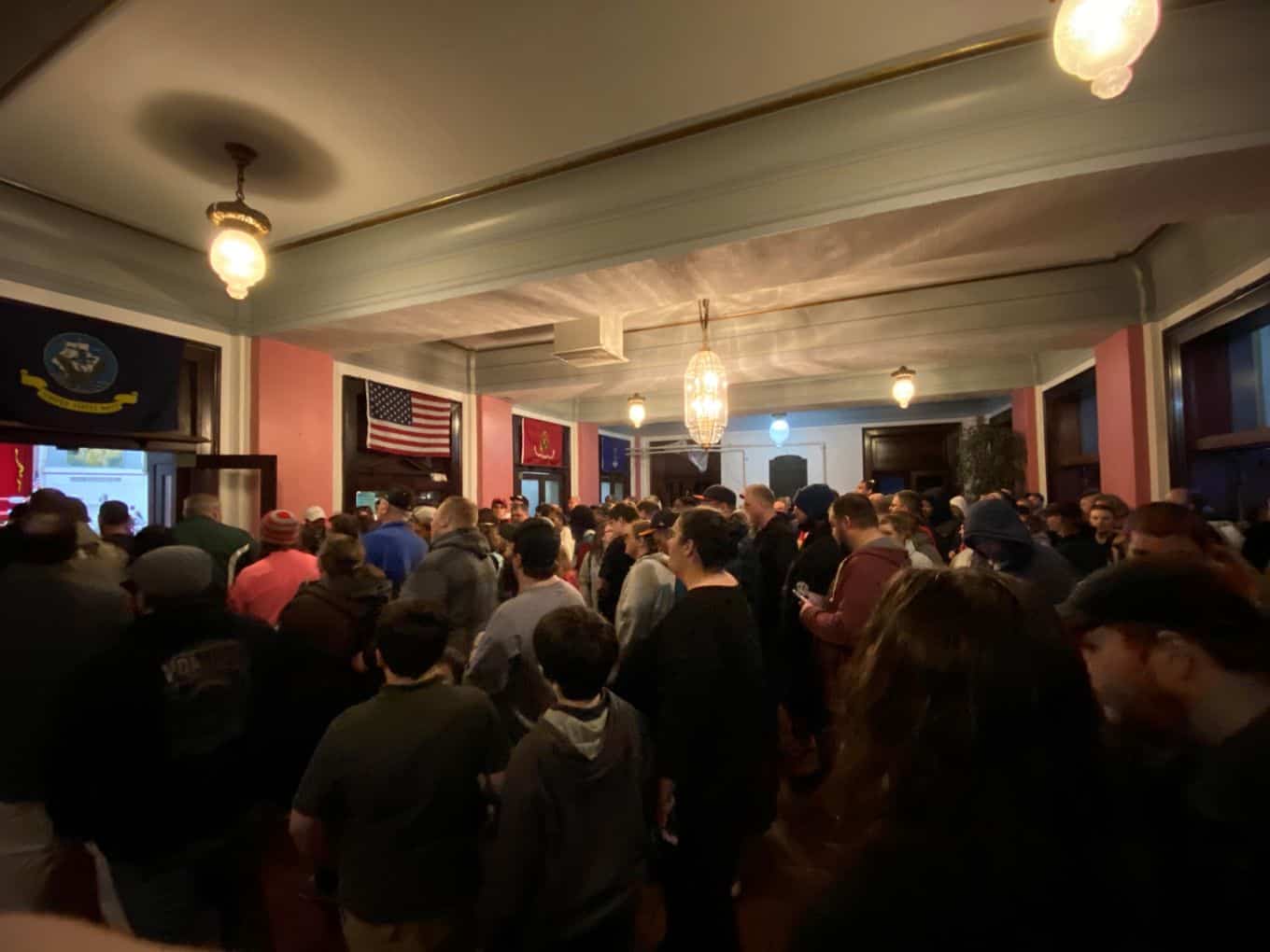 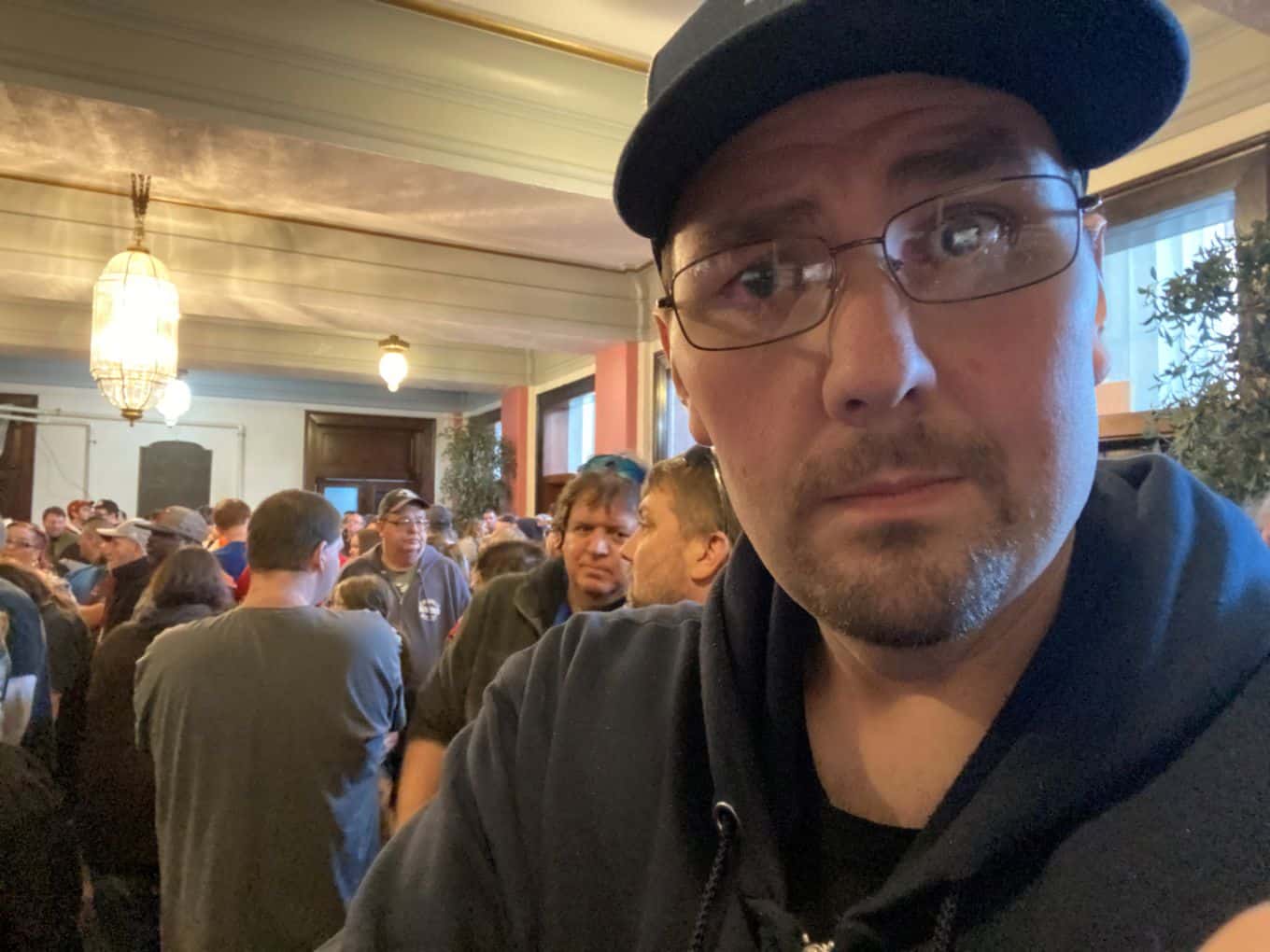 Finally, around 40 minutes after scheduled opening and 10 minutes after the start time, the doors are opened. And I find out my will call tickets are in a different line. Bummer. But when I am in, it appears like most independent shows I would expect. Along the outer walls, you see tables with the various wrestlers lined up with merchandise, including The Boogeyman whose line is clearly the longest. But I couldn’t help myself, so I went to go get a picture, as evidenced below. 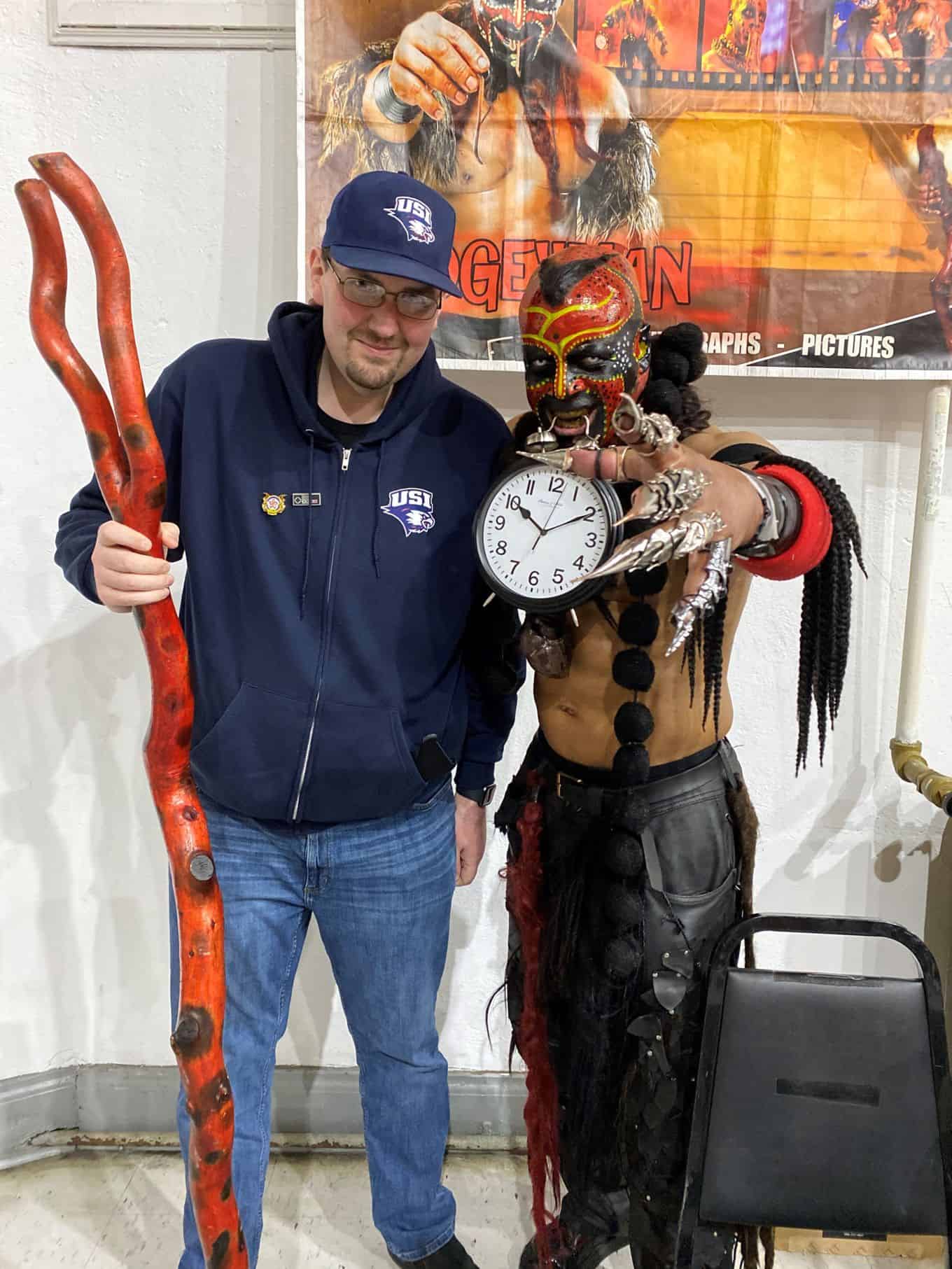 After fighting my way through a single line to get snacks and a drink, I make my way to ringside to check out the show. And the set was actually really nice. No video screens, but a nice backdrop and two entrances. 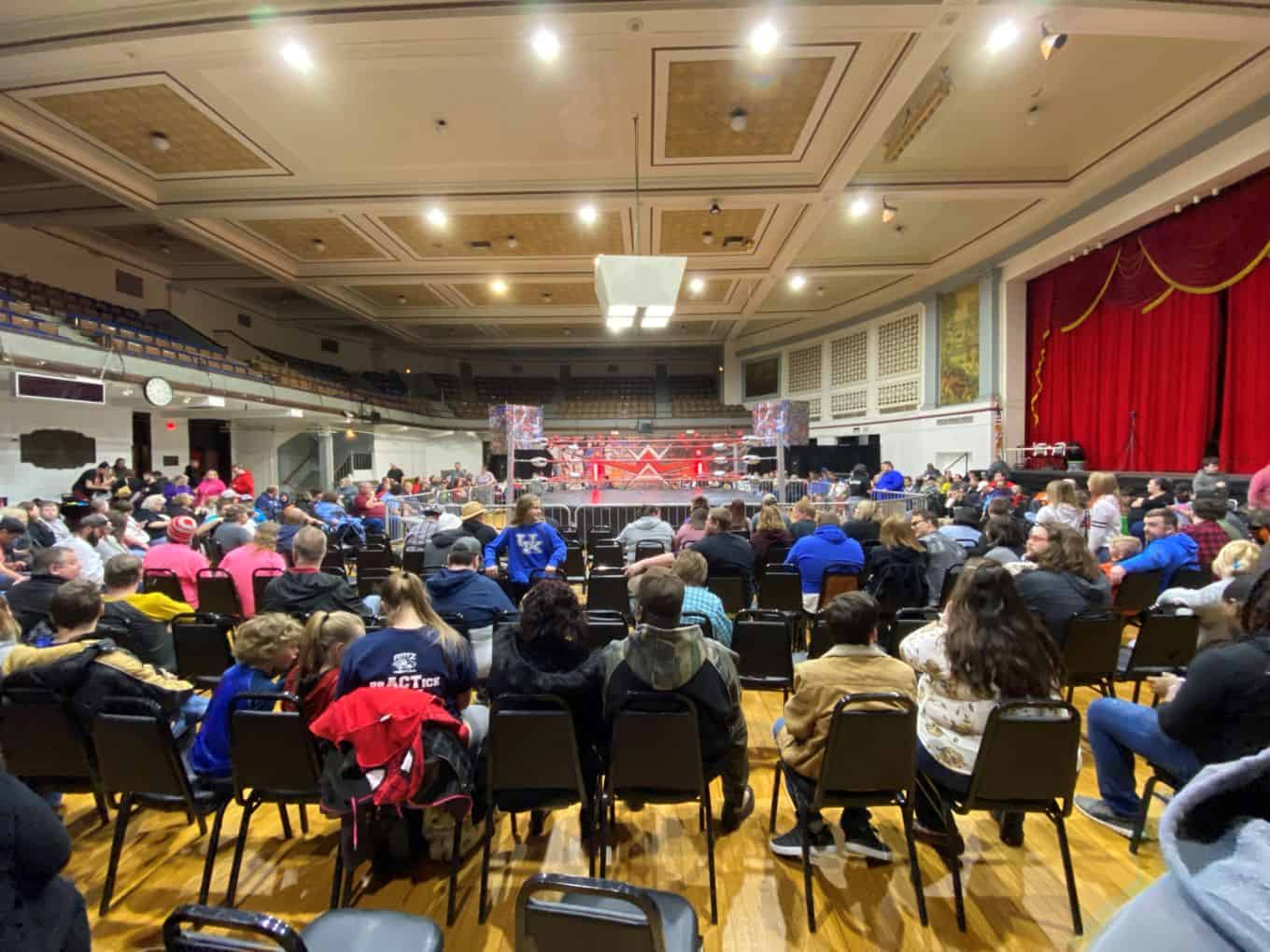 They start off with an Opening Promo, which contains the current top heel faction “The Three” moving to crown one of their members as the best in the organization with an actual crown. This goes about how you would expect with the current face champion in Superstar Ray Waddell coming out to challenge them to a three on three match a few events down the road as Indiana’s Biggest Battle Royal is already tonight. Another wrestler comes out after The Three’s mouthpiece in CCW (Chris Waddell) says that Ray doesn’t have any friends to team with him. The two of them clean house as this is just like Whose Line is it Anyway? and the numbers don’t matter. The crown is crushed by the faces and everyone clears out for…

So, Black Magic’s partner Munchie (who, after looking at the Facebook promos afterwards, seems to have a gimmick of carrying around a bag of Cheetos. Go Figure.) has no showed for some reason. It is at this time that I noticed that one of the announcers on their recording was wearing a full biohazard type suit, which was later referenced as him protecting himself from the coronavirus. Topical.

Some good action as I learn that Logan Legit reminds me of Tyler Breeze but with the easy Southern heel pull of having a higher pitched voice and acting a bit stereotypically flamboyant. Which was fun later in INDIANA’S BIGGEST BATTLE ROYAL, but I am getting ahead of myself.

Heel tactics abound in this match and a spray of cologne to the eyes blinds Black Magic long enough to get the 3 and the win for the current champions. But the head ref comes out to explain to the distracted ref that this happened, and the match MUST BE RESTARTED. It does so, and the match quickly swings around to Black Magic who actually gets the pinfall and the Tag Championship. One assumes the other belt will go to Munchie, but I am not in prime areas for shows, so I guess I will find that out later.

I look around between matches and the concession line is still brutally long. Most of the wrestlers, including Boogeyman have gone backstage, likely preparing for INDIANA’S BIGGEST BATTLE ROYAL.

This was the match of the night for me as we had Cowboy Jones who had a seeming cowboy party boy gimmick as members of the audience shoot off confetti cannons that they purchased at his stand earlier.

The match itself was amazingly good with GREAT heel stuff from Evans throughout the match. He would not lay off the audience any time they spoke up and he had a moment to yell at them in the crowd. His wrestling was also great with Jones in the match itself. It was during this match that I figured out I had two other people right next to me that have likely not seen this product either that were highly impressed by him as well. The rest of the crowd with WWA merch on were fully behind Jones and booing Evans with all their power. So double points there. 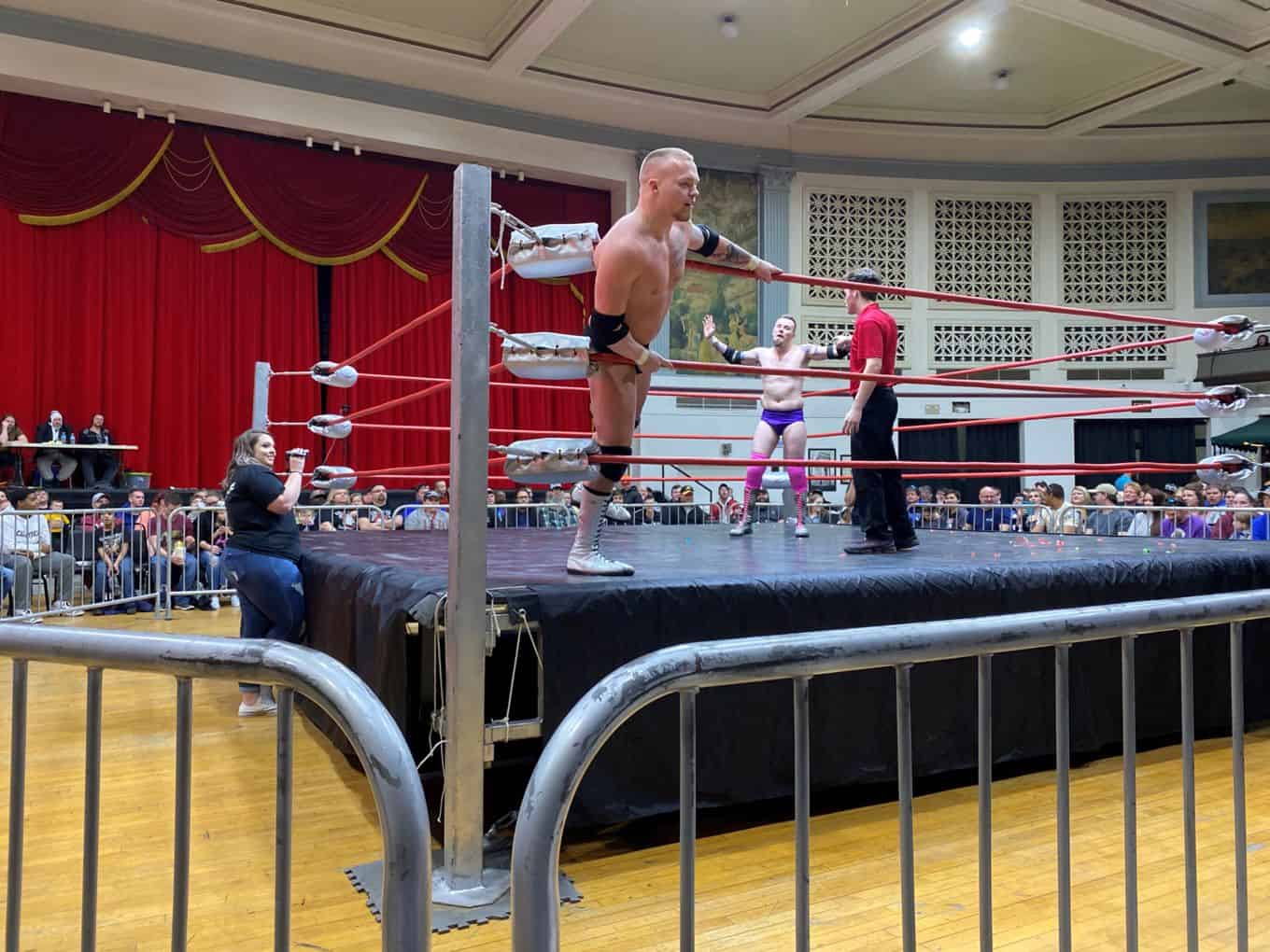 Your eventual winner (second face of the night) is Cowboy Jones.

We then come to an open challenge that was advertised on the Facebook group through a promo by a heel by the name of Alex Knight. We learn by him getting on the mic that he is wanting to warm up for INDIANA’S BIGGEST BATTLE ROYAL later that night. So, he challenges anyone in the back to come out and wrestle him. The one that responds is a wrestler by the name of Zodiac. This is your standard Abyss/Mankind looking wrestler from what I could first see with sirens at the beginning of his music that told everyone else to cheer the moment that they heard it. It just made my ears kind of angry.

Alex Knight does not seem pleased with who has come out to him and spends a good five minutes dodging him and teasing like he is going to leave without fighting. This brings Zodiac out to bring him back in and we have a match where Zodiac is dominating for most of it. Halfway through the match, Knight is recovering in a corner and manages to pull down the turnbuckle pad to where more of the buckle itself is showing. Not actually fully off though. We get teased several times that someone is going into it before Zodiac eventually bites it, laying him out for our win.

He scrambles, Zodiac gets up eventually, and the referee finally finds the turnbuckle pad in the wrong place and looks around confused as he puts it back. But this isn’t for any the belts, so no main ref to come out and correct the young-looking lad.

We reach intermission as the announcer comes in to remind everyone of upcoming shows from WWA as well as a show called Heroes and Legends coming to the Coliseum soon with legends such as Gangrel, The Godfather, James Storm, PG-13, and RICKY STEAMBOAT. Seriously, all you had to say was that Steamboat is going to be there and I am a likely candidate for front row. Then, the chairman of that show comes in to thank WWA, and comes in with Tracy Smothers who has to be helped into the ring, understandably so considering he went through chemo EARLIER THAT DAY.  Great stuff from both of them promoting the show and local wrestling in general in a piece that I hope I can get online and put below for you.

Right after this is a part that I think is kind of neat for fans of the promotion in that they offer photos with Black Magic in the ring with one of the belts that Munchie is not there to hold at the moment. Instead, fans are encouraged to pose as his partner for the picture. And really, I couldn’t help myself. 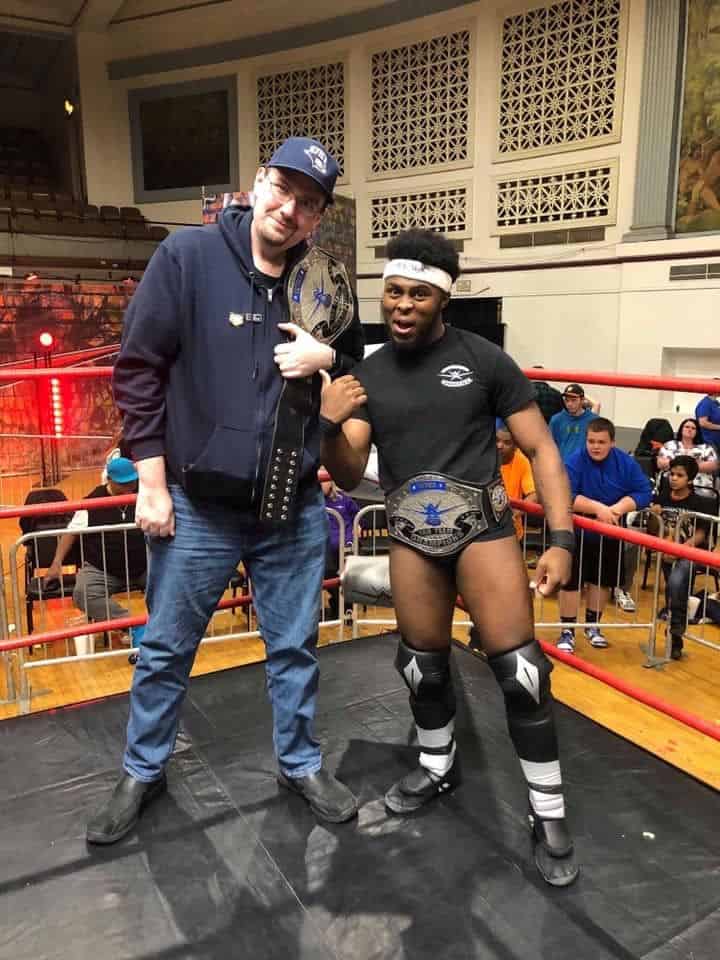 Right after intermission is our MAIN EVENT.

The pace moves somewhat quickly at times and slow at others as they clearly are pacing this from backstage as any good battle royal should be. Wrestlers from earlier on in the night are included as well as more that were promoted. The largest surprise in all of this was Rene Dupree! 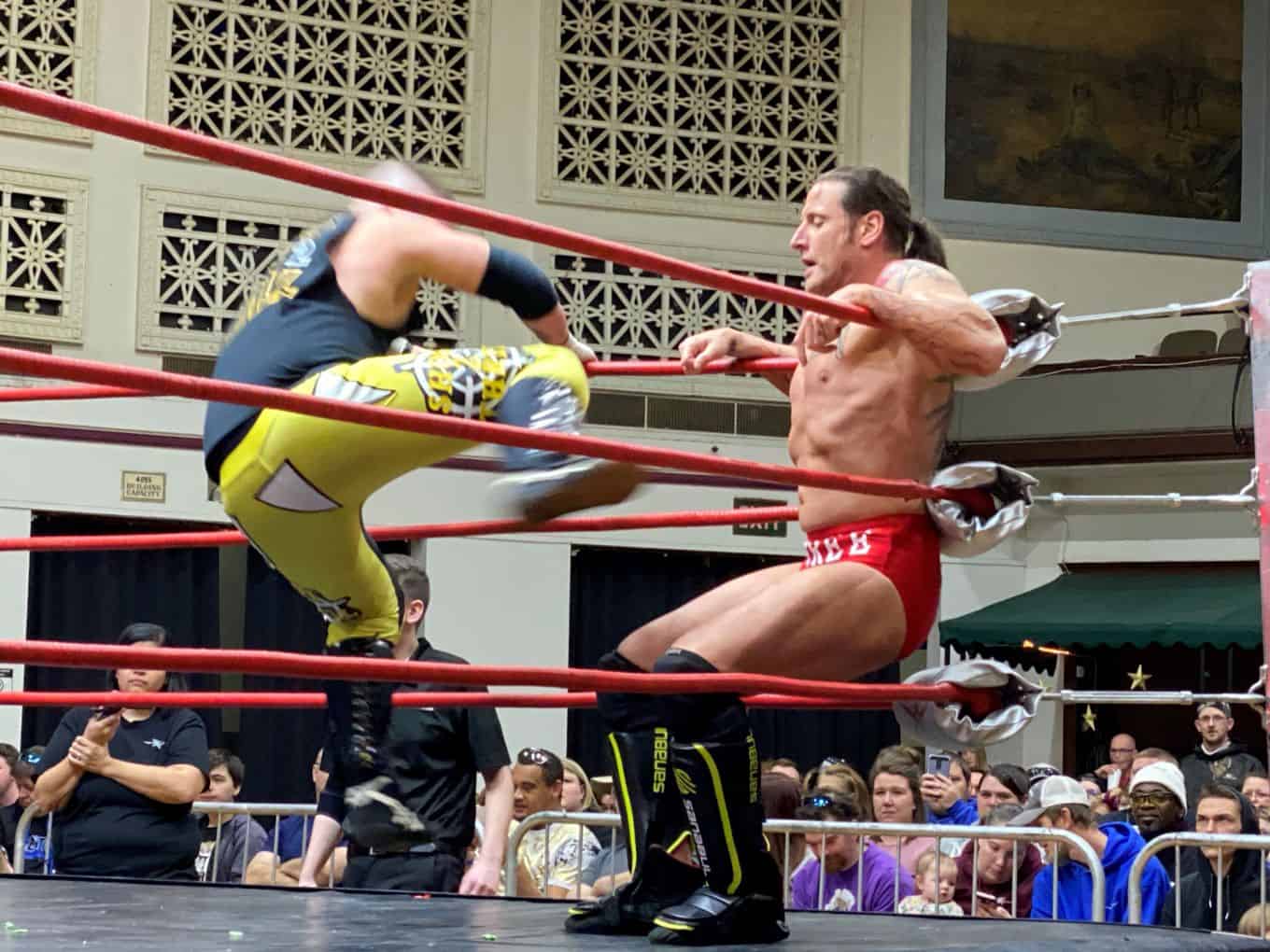 And let me tell you. When you have someone that was McMahon-sized in the ring with a lot of local stars, it shows. One of the heels does eventually take him out, and he stays by the ring to help get said heel out a few minutes later. They only had two refs. No one to spare to take him away from ringside, I guess. The Three are in the ring together, eliminating good guys as they come in. This includes, after working on him for a while, the current champion in Ray Waddell. So, we are getting a new champion. Eventually, we get a HEEL OVERLOAD and someone is needed to clear the ring. And that one man is The Boogeyman.

After the insanity in that video shows, we get back to the action as Josiah is one of the last faces in the ring and the heels that are left after The Boogeyman lays waste continue to work on him. I learned one name of a local guy that is highly popular, and that is Willie Finesse. Which makes it even more heartbreaking that he goes out and the contingent of women fans next to me are MAD. Eventually we get down to a happy ending for the crowd as Josiah is able to hang on long enough to win. 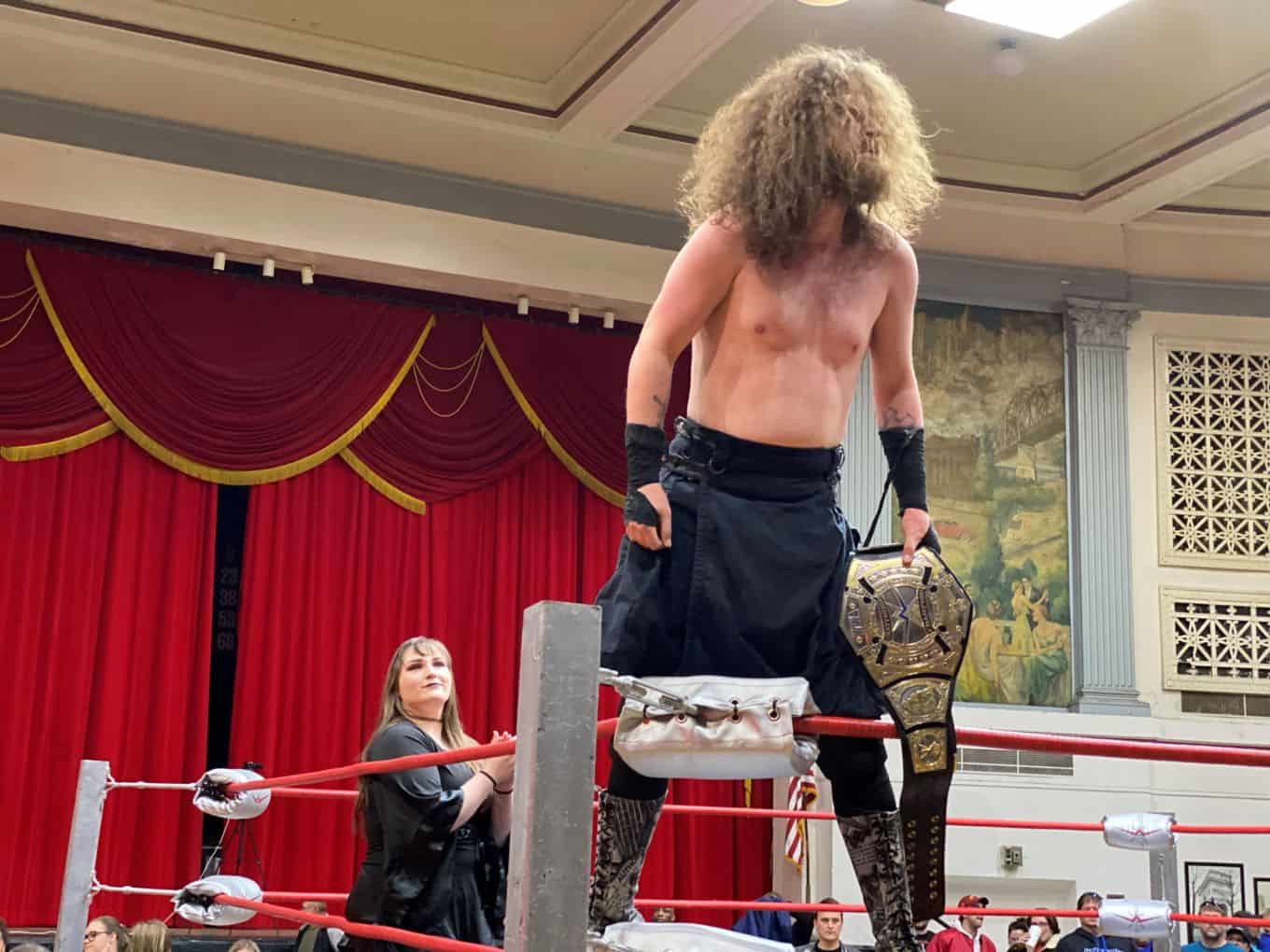 What started out as a rough night with the issues of opening and huge lines turned out to be a solid night of wrestling. I am already thinking of coming back to see another show the next time that they are in Evansville and am looking forward to it. It was also nice to see a local promotion that had great production value (save for a shorting mic, but that is more on the coliseum) and hope that they have much better attendance for that show. But with that being said, this was much more packed than the previous show I went to here. Can’t wait for that Heroes and Legends show though.

Vincent is a "writer" on Inside Pulse Wrestling. He is a former DJ of a Wrestling Talk Radio show and sort of pretends to know things.
More from this author