There’s a simple dream that those aspire to big stardom in the world of stand up comedy. You move to Los Angeles, do five minutes at a comedy club on amateur night when a rep from Tonight Show is in the audience, get invited to perform on TV and get a network offer that leads to a sitcom. It’s pretty simple, but so hard to get in such a fast order. Standing Up, Falling Down has Ben Schwartz ( Sonic the Hedgehog) return home after the plan doesn’t work after several years. As he picks apart his life, he sparks a friendship with Billy Crystal (Soap). The film comes out on Blu-ray on March 31. Here’s the press release from Shout! Factory with bonus features details: 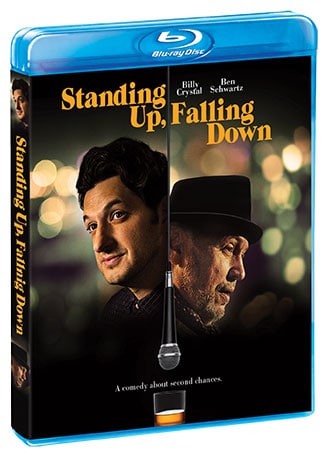 STANDING UP, FALLING DOWN
Arrives on Blu-ray, DVD, and Digital March 31, 2020 from Shout! Studios

A poignant comedy that will resonate with anyone who has ever battled regrets, Standing Up, Falling Down is the story of struggling stand-up comedian who moves back home to Long Island and strikes up an unlikely friendship with his eccentric dermatologist.

Directed by Matt Ratner and starring Billy Crystal, Ben Schwartz, Eloise Mumford, Grace Gummer, Nate Corddry, Jill Hennessy, Caitlin McGee, and David Castañeda, with Debra Monk and Kevin Dunn, this award-winning movie makes its Blu-ray, DVD and digital debut on March 31, 2020 from Shout! Studios. The release also includes a number of bonus features, including an audio commentary with filmmaker Matt Ratner and stars Ben Schwartz and Billy Crystal, a three-part look at the making of Standing Up, Falling Down, and more! Movie collectors and fans can pre-order their copies now by visiting ShoutFactory.com

After four years of chasing his stand-up comedy dream in Los Angeles, 34-year-old Scott Rollins (Ben Schwartz) has crashed and burned. Hard. Left with little money and a fledgling at best “career”, Scott has no choice but to regroup, lick his wounds, and return home to his parent’s house in Long Island. While trying to figure out what to do next, Scott pines after his ex, Becky Brookes (Eloise Mumford), a successful photographer who has since married a former mutual friend. On a night out at the bar, Scott strikes up an unlikely friendship with an eccentric dermatologist, Marty (Billy Crystal), who has regrets of his own. Marty and Scott both help each other find the courage to face the failures in their lives.