Fans of Hammer Horror have been in pure bliss over few years thanks to Scream Factory putting out Blu-rays of the films original distributed in the USA from Fox. But Scream Factory over the last few months have been able to go even further. The two titles that Paramount controlled are coming out from Blu-ray. The first is Captain Kronos: Vampire Hunter which had Horst Janson as the military man tracking down the undead with Caroline Munro (Dracula 1972 A.D.) as his assistant. The Blu-ray with bonus features about Hammer in the ’70s arrives on April 14. Frankenstein And The Monster From Hell was the final entry in the studio’s Frankenstein franchise. The film is noted for it had Peter Cushing and David Prowse working together right before they’d team up in Star Wars as Grand Moff Tarkin and Darth Vader. They also have two Hammer films that were quite horror. The Lost Continent is about a steamer ship getting trapped in a strange place. It’s based on a novel by Dennis Wheatley (The Devil Rides Out). Shatter is the second co-production Hammer made with Shaw Brothers in Hong Kong after The Legend Of The Seven Golden Vampires. This has Stuart Whitman as a hitman who gets double crossed on a contract kill. The bonus features include a commentary with Monte Hellman (Two Lane Blacktop). He was the director until he got yanked off the shoot. The Blu-ray hits shelves on April 28.

The next batch of Hammer films that Scream Factory are upgrading are the ones from Universal Studios. First up is The Curse of the Werewolf. Oliver Reed (Tommy) is the hairy title monster. The film doesn’t try to recreate the Universal version of how he gained his hair and fangs. Scream Factory is making this a collector’s edition with new bonus features. Here’s the press release from Scream Factory with all the details: 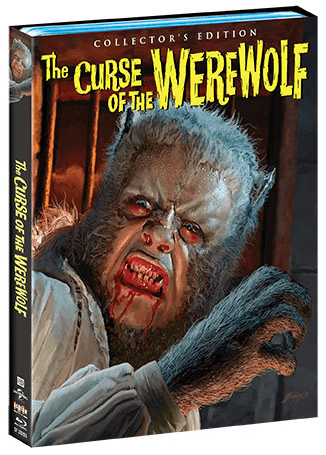 His beast-blood demanded him KILL … KILL … KILL! On April 21, 2020, SCREAM FACTORY™ is excited to present the highly sought-after Hammer Film cult classic THE CURSE OF THE WEREWOLF Collector’s Edition Blu-ray. Directed by legendary horror filmmaker Terence Fisher (Horror of Dracula, The Curse Of Frankenstein), this horror classic stars Clifford Evans (The Kiss of the Vampire), Oliver Reed (Gladiator), Yvonne Romain (The Last of Sheila), and Catherine Feller (The Little World of Don Camillo). A must-have for movie collectors, this definitive Blu-ray release contains special bonus content, including a new 4K scan of the original film elements, new audio commentaries, and much more! Pre-order is available now at ShoutFactory.com.

Avid fans and collectors, please take note: those who order THE CURSE OF THE WEREWOLF Collector’s Edition from ShoutFactory.com and get an EXCLUSIVE 18″ X 24″ ROLLED POSTER featuring brand new artwork, available while supplies last!

Directed by legendary horror filmmaker Terence Fisher, this atmospheric tale of terror stars Oliver Reed as the orphan of a maniacal beggar and a mute girl. From his birth to young manhood, he discovers a horrible secret. Try as he may, the cursed man is unable to deny the dark force within him. When the moon is full, he becomes an uncontrollable, seemingly unstoppable killer incapable of distinguishing between friend and foe. Spectacular makeup effects and beautifully photographed 19th-century European locales heighten the suspense of this classic tale of horror.