Justice Society Of America (JSA) and Earth 2 Shadow Over A New Justice League and Batman / Superman!

It’s Superman versus Batman as the deadly machinations of the Ultra-Humanite crash to their end! The Dark Knight has been transformed into a human atomic bomb, all in the name of wiping Superman from the face of the Earth! As Batman struggles against the urge to kill his friend, Superman must undo the damage done and help the other victims of the Ultra-Humanite’s experiments. It’s the thrilling conclusion to “Atomic” that will reverberate across the DC Universe for months to come!

After a corrupted Anti-Life Equation turned billions into monsters—including Earth’s Greatest Heroes—our planet was as good as dead.

Years later, a distress call brings Damian Wayne, Jon Kent, and Cassie Sandsmark—the Batman, Superman, and Wonder Woman of Earth 2—back to a dead planet…but what will this new Justice League find waiting for them? If life still exists on Earth, who—or what—is lying in wait for these heroes?

The original creative team of Tom Taylor and Trevor Hairsine reunite for the sequel to the 2019 blockbuster series DCeased! 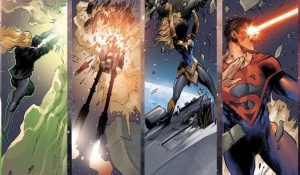 This is also a possible future cover for the series as well by David Finch.

Did you catch the JSA influences in the solicitations? The new Earth in DCeased is called Earth 2 while the Ultra-Humanite battling the World’s Finest is a classic JSA villain.