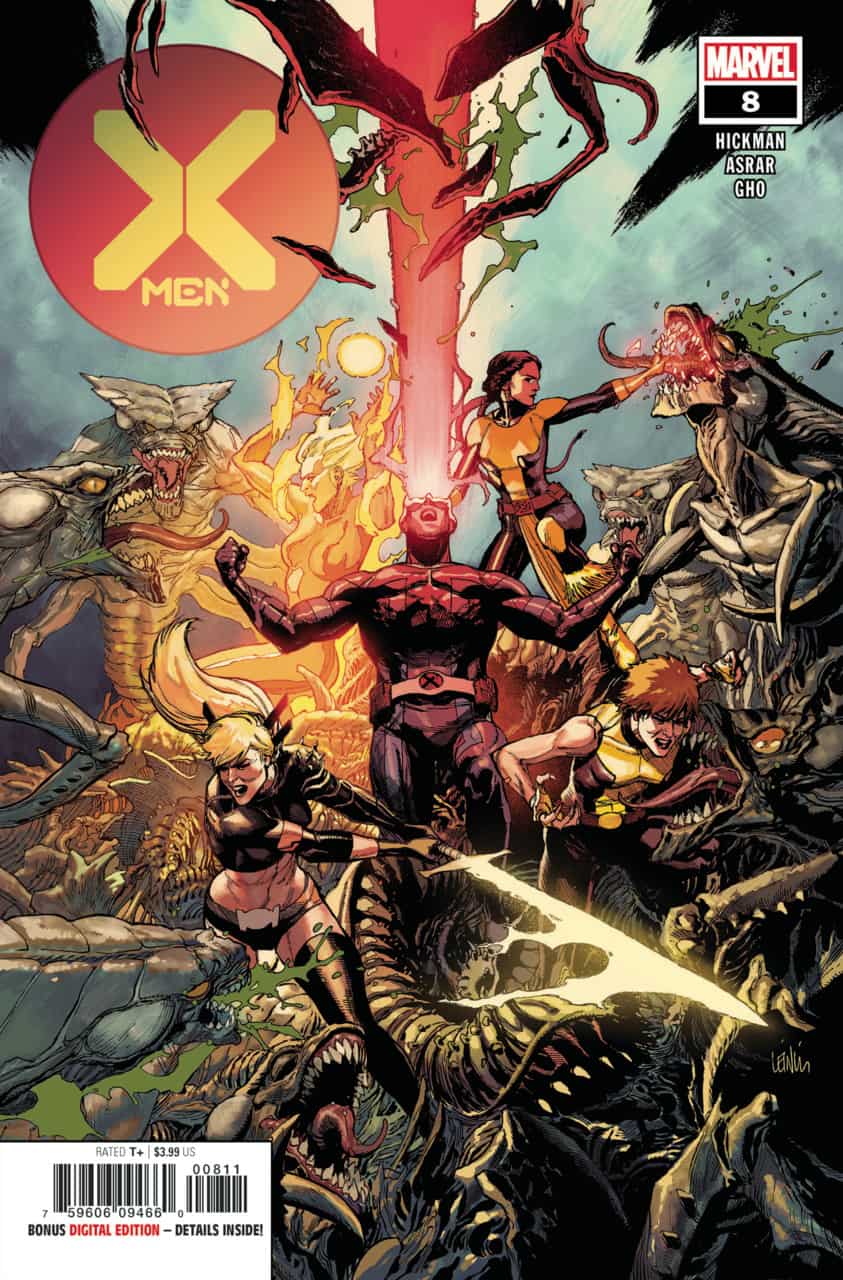 X-Men #8 – In many ways, this is the most straight-forward issue of X-Men in this run, but it’s heavily predicated on readers having read the issues of New Mutants that Jonathan Hickman wrote to be able to follow.  When Rahne was in Shi’ar space, she stole a King Egg, which brings a bunch of Brood to Krakoa to retrieve it. There are a few things in this issue that don’t make sense. To get the Egg away from Krakoa, Cyclops and his family fly away from Earth with it, but previously, he was fighting alongside Magik, who could have sent it to Limbo and away from the Brood completely.  I also didn’t understand how Broo, the mutant Brood that is currently an Agent of Wakanda, could travel through the Krakoan gates, when he’s not a human mutant. I was pleased to see Mahmud Asrar draw this issue; his work is very nice.

Cable #1 – I wasn’t sure what to expect from this new series featuring Young Cable.  I like the character, and was curious to get to know him a little better, as he hasn’t been given a lot of exposure since coming to our time, outside of Ed Brisson’s excellent X-Force series of last year.  Young Cable is much more interesting to me than Old Cable ever was, and I was interested in the first half of this book, which has him, Armor, and Pixie exploring the new monstrous part of Krakoa (it’s about time that got mentioned again), and trying to rescue a young mutant.  Cable finds an item that is connected to one of the classic 70s and 80s Marvel titles that is no longer published due to licensing concerns, and that got me pretty excited. Then it looks like a recently-deceased character that I’m not too fond of is coming back. From this oversized issue, I don’t get any real idea of what Gerry Duggan wants to accomplish or explore with this title.  Phil Noto’s art is lovely, but feels a little too light on the page. I’ll definitely give this one arc, but I’m not convinced that I want to stay with it for the long haul (to the extent that any Marvel title has a long haul these days). 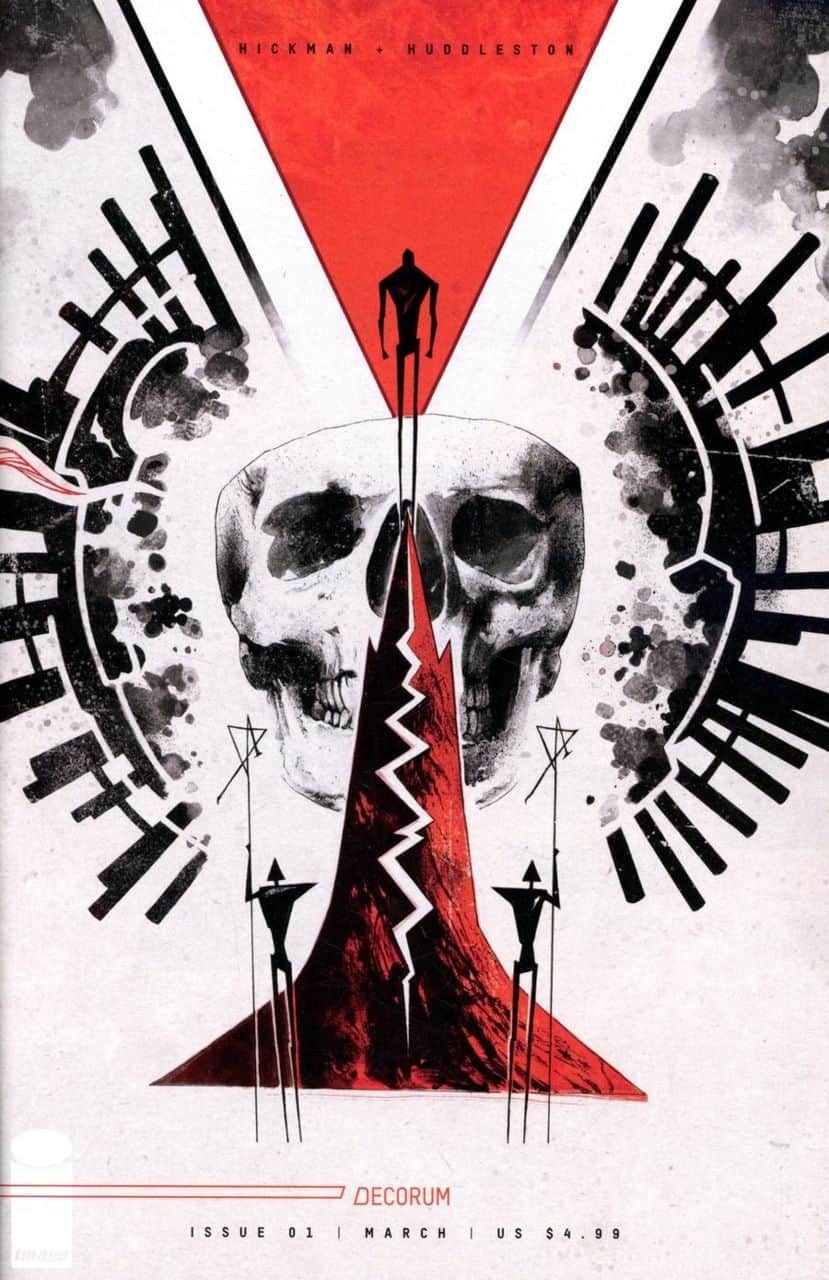 Decorum #1 – I wasn’t too sure what to expect from the first issue of Decorum, the new series by Jonathan Hickman and Mike Huddleston.  This issue is massive, with a large number of text pages that help explain the universe the story is set in. The thing is, Hickman tosses a massive number of ideas at the reader, without really pulling together much of a story.  The beginning of the issue makes me think this title is going to be about galactic colonization, but then later on we meet a young courier who is sent into the middle of a tense gang-related standoff. I don’t really know what all is going on yet, but I’m definitely interested in learning more.  Huddleston uses a wide variety of art styles, which is somewhat confusing in places, but overall, I see the potential in this book. I’m hoping a second read before the next issue comes out will help clarify how the various pieces fit together.

Immortal Hulk #32 – As Xemnu supplants the Hulk in the memory of just about everyone around the world, he also uses his mental powers to change Robert (not Bruce) Banner’s personality to help him reach his own goals.  This series continues to be unpredictable and full of interesting turns. Al Ewing is the sharpest writer working at Marvel right now.

Manifest Destiny #42 – There’s a definite sense of acceleration in this issue of Manifest Destiny, as Lewis and Clark start to bypass the arches that have always signified doom so far, and move more quickly to their destinations.  This issue takes the time to let romance bloom in an unlikely place or two, but also shows that some sinister things have been afoot. The end of the issue is confusing, and feels like something got altered as they were finalizing it, but the last panel guarantees that things are going to be very different for the expedition when the book returns from a brief hiatus.

New Mutants #9 – So is Ed Brisson the regular writer of this book now?  His story in this issue features many of the core team, newly returned from space, joining up with Boom Boom and Magma to run a rescue mission into a former-Soviet state that is hostile towards mutants.  There’s a lot here that feels like we’ve seen it before, and recently in Brisson’s X-Force run, but it works pretty nicely, and gives me hope for the sustained future of this book. Flaviano’s art is quite nice, and works well with these characters.  I feel like the team is definitely stepping on the Marauders’ toes in taking on these missions, but it’s all good, as the Krakoan nation has made their traditional enemies into friends (as seen by the trip to the MLF’s communal home).

Rai #5 – Rai and Gilad put their differences aside as they have to fight to protect the small farming community that they came to blows over last issue.  I like how Dan Abnett reveals Rai’s motivations a little more this issue, and what his long-term plans are. This run is shaping up very well.

SFSX #7 – The first arc of this series races to an unexpected conclusion as Avory and her friends decide that they need to strike a blow at the Party that has made their lives so difficult and boring.  Like in real life, however, the revolution does not spark the kind of change they were hoping for. While this book takes its portrayal of sexual repression to extremes, it also has a lot to say about how things appear to be headed in America today, so it’s not a big surprise to see how it all plays out.  This is a great new series, and I sincerely hope it returns for more.

Snotgirl #15 – I’m not really very sure what’s going on with this book now.  It’s been ages since the last issue, and this one is just bizarre, as Lottie and her social circle end up in the woods for Normgirl’s wedding, as a forest fire bears down on them.  Lottie tries to clarify her relationship with Coolgirl, and ends up both killing her and not killing her? I don’t really get it. And then the last page says that the book that barely comes out once a year is going on hiatus.  Maybe I shouldn’t have bothered adding this to my pullfile?

Star Wars: Bounty Hunters #1 – I was intrigued by this new title, which is going to prominently feature Boba Fett, Bossk, and Beilart Valance, all characters that I enjoy.  The thing is, this first issue is kind of messy, as writer Ethan Sacks works to establish a link between all of his principle characters, and a reason for them to cross paths again in the current Star Wars comics timeline.  The opening pages are confusing, as it’s hard to tell who the new characters are. When one of them does something transgressive, it doesn’t come off as all that significant. Part of the problem is that artist Paolo Villanelli’s storytelling is also unclear.  I’m hoping this gets better. If it’s an ongoing, I might not be around for the second arc if things don’t improve quickly.

Star Wars: Darth Vader #2 – I am impressed with how quickly Greg Pak and Raffaele Ienco have gotten me interested in this new series.  Vader is hunting down the truth of how Luke Skywalker’s existence was hidden from him, and that leads him to a backwater planet where he finds someone he thinks is Padmé Amidala.  It isn’t, of course, but this new character is pretty fascinating, especially when she starts bossing Vader around. Ienco’s art is fantastic, and I see a lot of potential in this title.

Star Wars: The Rise of Kylo Ren #4 – I liked this Kylo Ren mini, as it helped flesh out the character, and explain that Norwegian death metal band, the Knights of Ren (although I’m still not sure why Goth Cobra Commander is a member).  I was surprised to see that Charles Soule got to show the big revelation at the centre of the most recent Star Wars movie, but I guess they figure everyone already knows about that. Will Sliney did some great work on this book.

Thor #4 – Thor and Sif have words, but pretty soon, Thor is back to working for Galactus, as the threat of the Winter arrives.  Donny Cates and Nic Klein are playing with some pretty big ideas in this book, and it’s keeping things feeling pretty high-stakes and fresh.  I like it.

Batman and the Outsiders #11

Superior Spider-Man #6-12 – I hadn’t noticed that this series ended.  I was finding myself getting more and more into this series, as Christos Gage has Otto Octavius wrestle with his impulse to do good, and try to find ease in being a hero.  It is pretty interesting stuff (much as when Dan Slott wrote the first Superior title), and to be honest, I’m not too happy with the way it ended. People really do like watching the long-running status quo win out, which is frustrating.  I’d rather see new stories. This book was very guest-star heavy, but it worked, as it was interesting to look at Otto through the eyes of the various heroes he crossed paths with.

Incognegro: Renaissance – I really liked the first Incognegro book, which was published by Vertigo about a decade ago.  This one, published by Dark Horse, is a prequel, featuring the early days of Zane Pinchback’s career as a journalist for a Harlem-based newspaper.  Zane is so light skinned that it’s quite simple for him to go “incognegro” – to pass as a white man in New York’s 1920s society. Zane is taken to a party being held by a famous white novelist, who has written a book that is set during the Harlem Renaissance.  While there, he meets Xavier, a black gay writer who has a connection to the novelist. Xavier apparently commits suicide during the party, but Zane is not convinced that’s what really happened. He’s curious about an actress who seemed close to Xavier, and is determined to find his way to the true story.  Mat Johnson and Warren Pleece do a fine job of recreating this storied time, and quickly draw the reader into the mystery that’s afoot. This book is smart, engaging, and very well-drawn. I recommend it.