NECA has announced a series of TMNT Loot Crates. There will be 3 Crates in all, with each of them following a different genre of TMNT, and will include an exclusive NECA action figure. The first Crate is themed ‘Mirage Comics’, and will include a figure of The Shredder. The 2nd box theme is ‘Arcade’, and the last ‘Cartoon.’ No figures for the last 2 have been revealed.

The Crates are $49.95 each, plus shipping. If you select the option to order all 3, there is an exclusive Bebop figure in his bunny costume! Head on over to Loot Crate to check this out! Check out the FAQ from their website below! 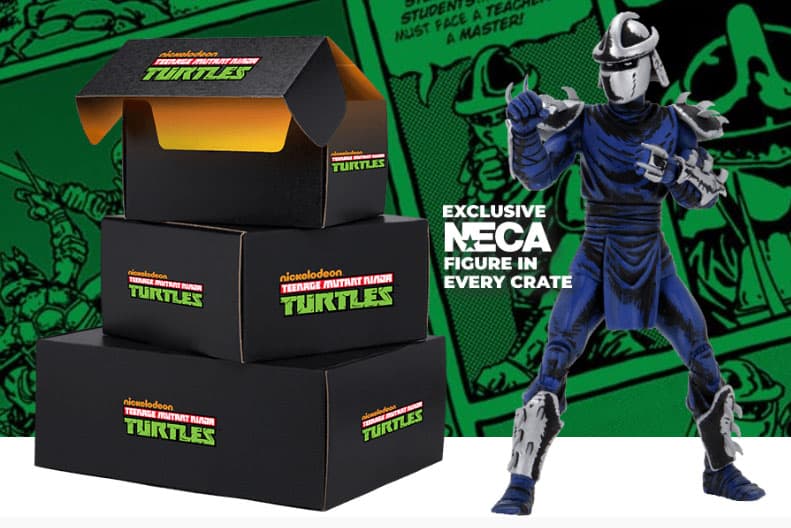 What kind of gear is included in the crate?
Apparel, collectibles, and other Loot Crate exclusive TMNT items celebrating the heroes in a half shell!

Is this a recurring subscription?
No. This is a one-time-only limited edition crate series. 1-crate plans are billed separately for each crate, but do not repeat after that.

Where will they ship?
They ship to every country Loot Crate currently ships to.

When will the crates ship?
The first crate is expected to ship in June 2020, the second in September, and the third in November.

What is the bonus figure and how do I get it?
The bonus figure is Bebop in a Bunny Suit, as seen in the classic Teenage Mutant Ninja Turtles episode “The Turtles and the Hare.” The 7” figure comes with awesome accessories, and you can only get it with the purchase of all three TMNT crates!