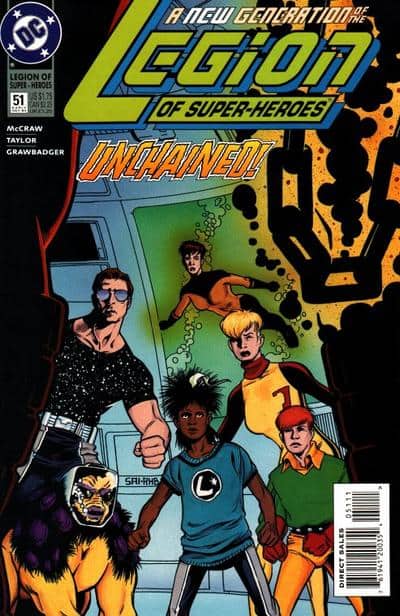 I remember being cautiously optimistic when Tom and Mary Bierbaum left the Legion of Super-Heroes, handing the reins to Tom McCraw, who had been the colourist on this version of the Legion since it began, and who had frequently contributed to stories as part of the very organic-feeling creative team.  I especially liked that in his half of issue fifty (discussed in my last column), he brought back Wildfire, a favourite character of mine.

I remember being not too sure of the problems that Universo was creating for the Legion, as it seemed a little simple, but my love for these characters, and my enthusiasm for Stuart Immonen’s art, had me on board for this latest creative team change.  What I didn’t know was that in a short time, McCraw would oversee some of the dumbest changes to the team I’d ever seen, and then ferry them to Zero Hour, when they would effectively cease to exist for all time.

Returning to these comics for the first time in decades, knowing how much I hate the ending to this run (even all these years later, and with the nice shiny new Legion book that DC is producing, I am still a little bitter about what was done to the Legion here), it’s hard to muster any real enthusiasm for reading them.  I hope that there is some decent stuff amidst all the things that I remember despising. Let’s find out together.

The Legionnaires (aka Batch SW6)

And that was it.  After thirty-six years, DC basically pulled the plug on the Legion, rebooting it the next month, but divorcing it from its rich history and unparalleled depth of supporting characters and massive built environment.  I’ve made no secret of the fact that I don’t like this decision, and think that it has led to over twenty years of lower quality Legion comics. I’ve lost count of how many times they’ve rebooted or tried to fix the team, and I think it all could have been avoided had DC followed Keith Giffen’s plans when he retconned so much of the team’s continuity, editing out Superboy.

Regardless, the point of this column is more to discuss Tom McCraw’s whole run than the end of it, which I’ll get back to.

When these comics first came out, I remember really not liking them.  This time around, I see more strengths than I did before, and suspect that most of my problems with the title come from the firm deadline that Zero Hour would have imposed on everything.  McCraw’s story about the Legion being framed by Universo and the Khunds never had enough space to really breathe. Aside from the stupidity of the new identities (more on that soon), this story could have lasted a few more issues and had much higher stakes, had space not become so limited.  The pacing was off from the beginning, and there were too many story elements (Rokk’s growing madness, Jacque’s detective work, Jo’s desire to search for Tinya) that were shoehorned in but not properly explored. I also would have liked to see more of the United Planets Academy squad, and just how the Heroes of Lallor ended up mindslaves for the Khunds.

There were two errors in this run that I found to be almost completely unforgivable.  The random changes in age wrought by Glorith were hard to swallow. Had that situation lasted for only an issue or two, I’d have been fine with it, but it seems to have been mostly used to get rid of some characters like Kent and Devlin, and then wasn’t explored as much as it could have been.  Having only Ayla continue to de-age didn’t make a lot of sense either.

And then there’s the new costumes and identities.  It sort of makes sense, when the team is in hiding, to try to look different, but the team was identified as the Legion during their fight on Rimbor, and after that, all pretence to them not being the Legion was dropped.  So why continue calling Vi Virus, or Rokk Polestar? These names were, to a one, stupid, with B-5 being perhaps the worst “disguise” name ever created. It would be like calling Superman S-Man, and expecting no one to figure it out.  It just didn’t make sense to me that the team that Giffen and the Bierbaums so clearly portrayed as having outgrown code names and uniforms would suddenly be all excited to take on new identities, and then insist on calling each other by them, to the point where Brin nicknamed Mysa “Jools”.

Long before we as readers knew that the book was scheduled to end, it became clear that so much of what Giffen and the Bierbaums had done with the title was being squandered.  It was sad to see the title that had been so intelligent and complex, with intricate plotting and characterization, devolve into a slapped together adventure book, before arguing itself out of existence.

I will say that it’s pretty clear why Stuart Immonen became a superstar after this run (I think he went from here to Superman before Nextwave made him a big name artist).  His storytelling is always clear, and his characters really breathe.

I decided that I am going to give the reboot Legion a real chance.  I know I want to read Dan Abnett and Andy Lanning’s run, and Legion Lost, but I’m not convinced that I’ll get through everything before that.  After the Zero Hour-mandated zero issues, LSH and Legionnaires effectively became one book, with the story continuing from one title to the next every two weeks.  That means I’m going to combine them into one column.

These comics have not been collected in any trades.