Bill Goldberg Gets New Opponent For WWE Universal Championship As Roman Reigns Back Out Over Covid-19 Coronavirus Health Concerns! 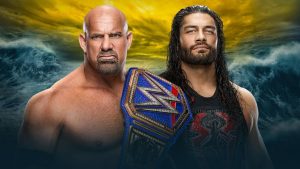 At WrestleMania, it will be the ultimate battle of Spears as the two-time Universal Champion Goldberg will go head-to-head with Roman Reigns.

Hungry to reclaim the Universal Championship, Goldberg returned to the squared circle in order to challenge “The Fiend” Bray Wyatt at WWE Super ShowDown and ultimately handed the monstrous titleholder his first loss on the back of four earth-shattering Spears and the Jackhammer.

There is no rest for the furious, however, especially when you’re dropping the gauntlet inside The Big Dog’s yard. Less than 24 hours after winning the title, the WWE Hall of Famer returned to Friday Night SmackDown with one simple question: “Who’s next?” Ask and you shall receive.

Always ready for a fight, Roman Reigns boldly emerged to answer Goldberg’s challenge head-on, setting the stage for a major showdown on The Grandest State of Them All. Fresh off his victory over adversary King Corbin inside a Steel Cage at WWE Super ShowDown, the 4-time World Champion was more than ready to relaunch his pursuit to get back to the top of the mountain. Time-and-time again, he has proven that he’s willing to go through the best to capture gold.

Indeed, there is no better place for an epic clash between Goldberg and Reigns than on The Showcase of the Immortals.

The Only WrestleMania Too Big for Just One Night! Don’t miss an historic two-night presentation of WrestleMania 36, streaming on WWE Network with former New England Patriot Rob Gronkowski hosting The Show of Shows, this Saturday and Sunday at 7 p.m. ET/4 p.m. PT. To watch WrestleMania on WWE Network, you must sign up for a free trial.

Get expert analysis on all things Showcase of the Immortals with the two-day WrestleMania Kickoff, Saturday and Sunday beginning at 6 ET / 3 PT on WWE.com, WWE Network, YouTube, Twitter, Facebook and Twitch – delivered by Papa Johns. 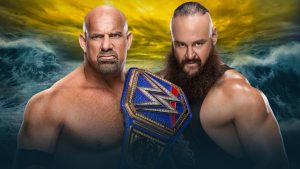 Braun Strowman will challenge Goldberg for the Universal Championship at the unprecedented, two-night edition of The Showcase of the Immortals, putting The Monster Among Men within distance of the World Title victory that has eluded him for years. The highly anticipated title bout also gives Goldberg the opportunity to score his most titanic conquest since trouncing Brock Lesnar at Survivor Series 2016.

Strowman has come close to the Universal Championship on several occasions, most notably a series of singles and multi-man matches back when Lesnar held the championship, a narrowly thwarted Money in the Bank cash-in and a tight loss to Seth Rollins. Since then, Strowman has rebounded to win the Andre the Giant Memorial Battle Royal and record a short stint with the Intercontinental Championship, but the World Title has remained beyond his reach until now.

The dominance of Goldberg, however, has remained absolute. Ever since he was announced as the surprise challenger to then-champion “The Fiend” Bray Wyatt, the WWE Hall of Famer has shown little signs of slowing down, plowing through the monstrous titleholder to become Universal Champion for the second time. As imposing as Strowman is, there’s no small chance he’ll simply be a bigger notch than most on Goldberg’s belt, but a notch all the same.

Tune in to The Only WrestleMania Too Big for Just One Night, streaming Saturday and Sunday at 7 ET/4 PT on the award-winning WWE Network.

This news follows Roman Reigns confirming on Monday he had pulled out of WrestleMania 36 with his replacement announced on Friday. Here is an excerpt from Reigns’ instragram video.

You already know what’s going on. It’s all over the news — the dirtsheets, whatever you want to call them — that I pulled out of WrestleMania. It’s funny because, for years now, man, years, people are like, ‘Don’t show up to WrestleMania. We don’t want you in it.’ There’s a nice handful of dudes and haters that didn’t want me there. But the moment I make a choice for me and my family, I’m a ‘coward,’ I’m a ‘sissy’ — a lot of different things that I am now.

Reigns has had a publicized recurrence and remission of lymphoma which still compromised his immune system. It was prudent for him to back out of WrestleMania at the height of the Covid-19 Coronavirus Pandemic.