I can’t remember the last time I went a week without new comics that I wasn’t on vacation.  There might have been a Christmas Week where I only picked up a single book, but since 52 had me up my comic store visits from biweekly to weekly, I think this might be the first week where I didn’t have something fresh off the presses to read.

In the grand scheme of everything that’s happening in the world, this doesn’t even register as a complaint.  It’s more an observation of how strange things are these days.  When life gets hard and uncertain though, escapism is a good way to restore balance, and I’m making use of this opportunity to catch up on comics and graphic novels that have been piling up for a while.  One thing I don’t lack for is entertainment. 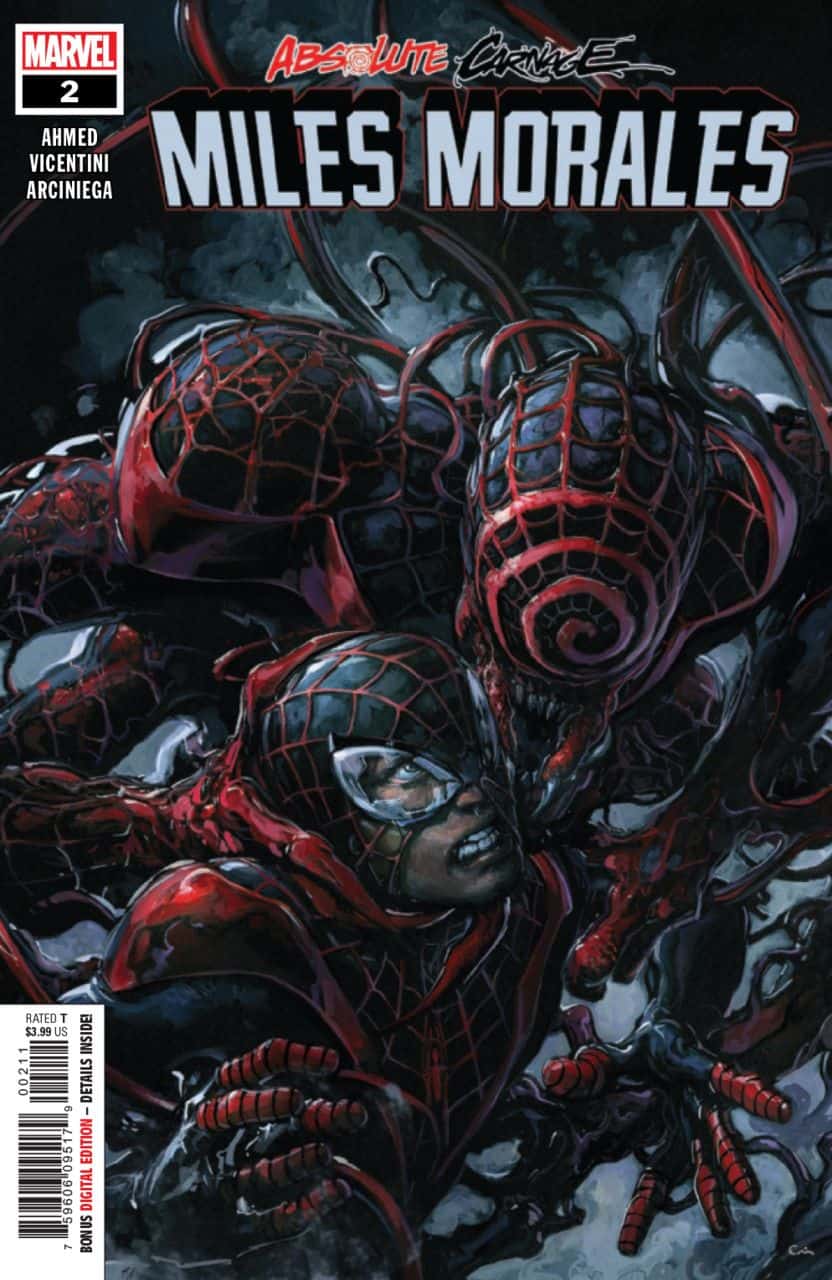 Absolute Carnage: Miles Morales #1-3 – I didn’t bother with the Absolute Carnage stuff, as I hate that character and just about everything related to him, but I love Miles and saw that this series was written by Saladin Ahmed, Miles’s regular writer.  It’s a bit of a throwaway. Carnage takes over Miles and tries to get him to kill J. Jonah Jameson, and Miles has to find his inner strength again. It’s all pretty paint by numbers.

Firefly: Bad Company – This oversized issue focuses on Saffron, the woman that was married to Malcolm Reynolds in one of the better episodes of the excellent Firefly series.  We see Saffron’s past, or at least the version of it she’s willing to tell, and get a sense of how she became such an accomplished liar. The story complements the larger story that Greg Pak is telling in the Firefly ongoing.  It’s written by Josh Lee Gordon, and illustrated by Francesco Mortarino, Giuseppe Cafaro, and Moy R., none of whom I’ve heard of, but who do a fine job of putting together and telling this story. I enjoyed it.

Star Wars: Age of Rebellion Special #1 – There are three stories in this one-off.  The IG-88 one, by Spurrier and Wijngaard, applies the same storytelling approach that they often used in their Doctor Aphra run to show that the notorious bounty hunter droid is more crafty and in control than he appears.  The Yoda story by Guggenheim and Broccardo is probably the weakest, but that could just be my personal bias against Yoda (and the fact that very little happens). Jon Adams provides the last story, which focuses on Biggs and Porkins, two pilots from the first Star Wars film that never got a lot of screen time.  It’s amusing and very attractive, in an indie way.

Star Wars: Age of Resistance – Poe Dameron #1 – I really enjoyed this Poe story, which shows his first interaction with the Resistance, when, as a New Republic pilot, he tries to stop some thieves, and ends up receiving a flying lesson from them instead.  I feel like this issue captured Poe better than his own series did in a couple of years of running. Tom Taylor and Ramon Rosanas work very well together in these one-offs.

Star Wars: Age of Resistance – Rey #1 – Taylor and Rosanas again give us a very decent Rey story.  I haven’t been the biggest fan of the character based on the first two movies she was in, but the third one got me to like her a little more (this comic came out before the film did), but so does this comic.  It’s among the better Age of Resistance books I’ve read so far.

Teen Titans #31-36 – I’m a big fan of Adam Glass’s Teen Titans.  This team of oddballs has been through a fair amount in their short time together, and now Red Arrow has left the team, everyone hates Damian, and it looks like someone on the team is a traitor.  Add to that the fact that Lobo is around and wants to kill his daughter, Crush. These are some strong issues, and they manage to exist within the larger framework of DC’s Year of the Villain without letting it completely derail Glass’s story.  Bernard Chang’s art is very nice, and the characters really breathe. 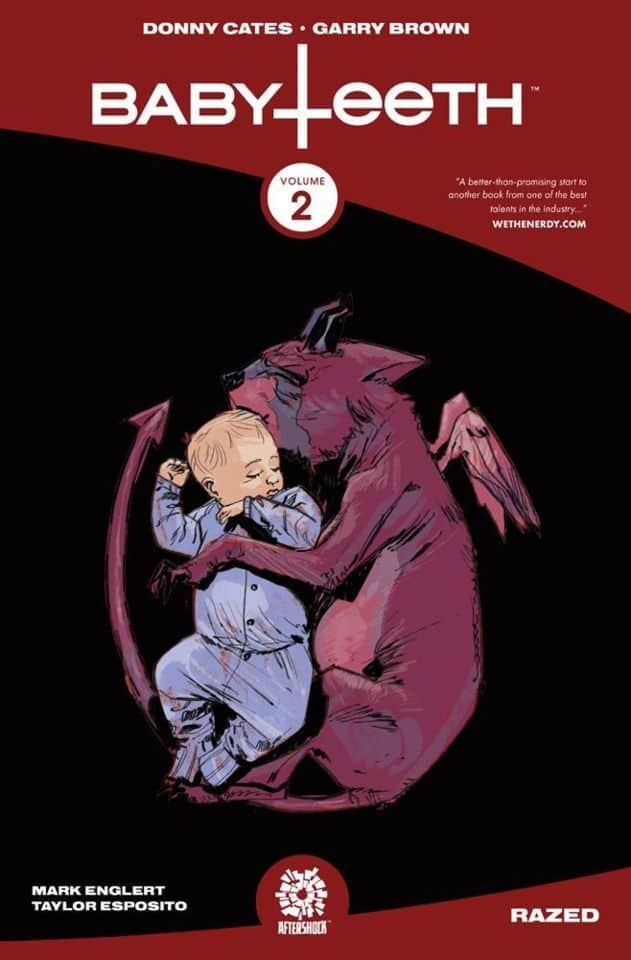 Babyteeth Vol. 2: Razed – The first volume of Babyteeth, Donny Cates and Garry Brown’s series at Aftershock, was fine, but this second one really pulled the series together and held my interest.  Sadie is a teenage mother who has learned that her newborn son has the ability to open a doorway to Hell, because he’s the Antichrist. After an attempt on his life, Sadie and her father and sister decided to accompany a strange man who helped them to the underground village that was built to help raise the child.  We get a lot of backstory in this volume, and things are much more clear. Cates does some very good character work here, and Brown is well-matched to the title. I don’t know if this series is still ongoing, but I want to get the rest of it.

Camelot 3000 – I’ve seen this series in dollar boxes almost my entire life, but I never thought about reading it until I saw the hardcover available for a very nice price.  This twelve issue miniseries that started in 1983 features incredible Brian Bolland artwork, and has the mythical King Arthur resurrect in the year 3000, as Earth deals with a brutal alien invasion.  Arthur gathers the other knights of the round table, and they begin to organize their resistance. Things get more complicated when his old foes also return, and as the Earth’s leadership is turned against him.  Also making things difficult, Lancelot and Guinvevere get up to their old tricks. Mike W. Barr tells this story in a pretty straight-forward way, but also breaks some ground in his portrayal of Sir Tristan, a very masculine knight who is brought back in the body of a woman, making him one of the first trans characters portrayed in comics, and in a sensitive and thoughtful way.  I enjoyed this book a lot more than I expected I would. 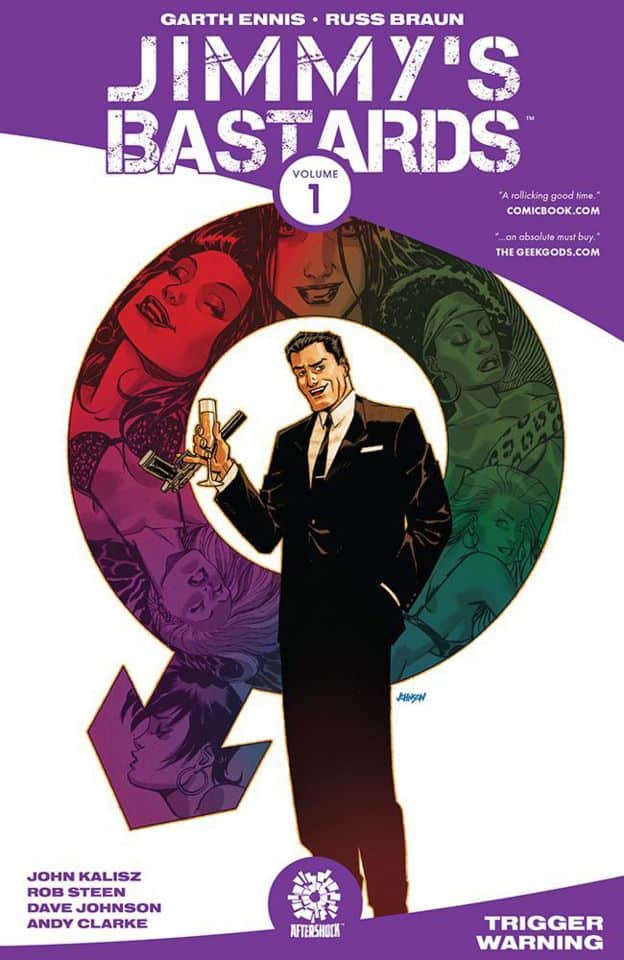 Jimmy’s Bastards Vol. 1: Trigger Warning – Basically, Garth Ennis is “taking the piss” out of both James Bond and our modern sense of political sensitivity with this book.  Jimmy Regent is a secret agent with a vast repertoire of sexual experience, although he’s never spent much time with any of the women he’s slept with before moving on.  Now, the consequences of his dalliances show up en masse to punish him, while also releasing something called “the gender fluid” on an unsuspecting London. This whole thing is ridiculous, but in that fun Garth Ennis way.

The Orb – Abolition of the Royal Familia – Nothing takes me back to being fifteen years old again faster than listening to The Orb, the pioneers of ambient house music.  This newest release proves that they can still keep their sound fresh, while being relaxing and beautiful.

Swamp Dogg – Sorry You Couldn’t Make It – Legendary alt-soul singer Swamp Dogg returns with the country album he’s always wanted to make, but with assistance from artists like Justin Vernon (Bon Iver), and the crew from Poliça, Marijuana Deathsquads, and Gayngs, it’s not like any country album you’ve ever heard.

John Carroll Kirby – Conflict – So much of the soundtrack of social isolation is, for me, solo piano music for some reason.  This new release is beautiful and soothing, but has a bit of a dark edge to it.  Great music to nap to in the middle of the day.

That’s it for this week.  Write in and tell us what you’re reading while you stay home.