The Weekly Round-Up #540 With Immortal Hulk #33, The Old Guard: Force Multiplied #4, Batman: White Knight & More Including The Week In Music!

It’s the second week without new comics, but I was able to get my hands on the five titles that my LCS was shorted on in that final shipment.  A busy week of working from home has left me with less time than usual to read comics, so this column is a little short, as I dig through a big stack of backlogged books. 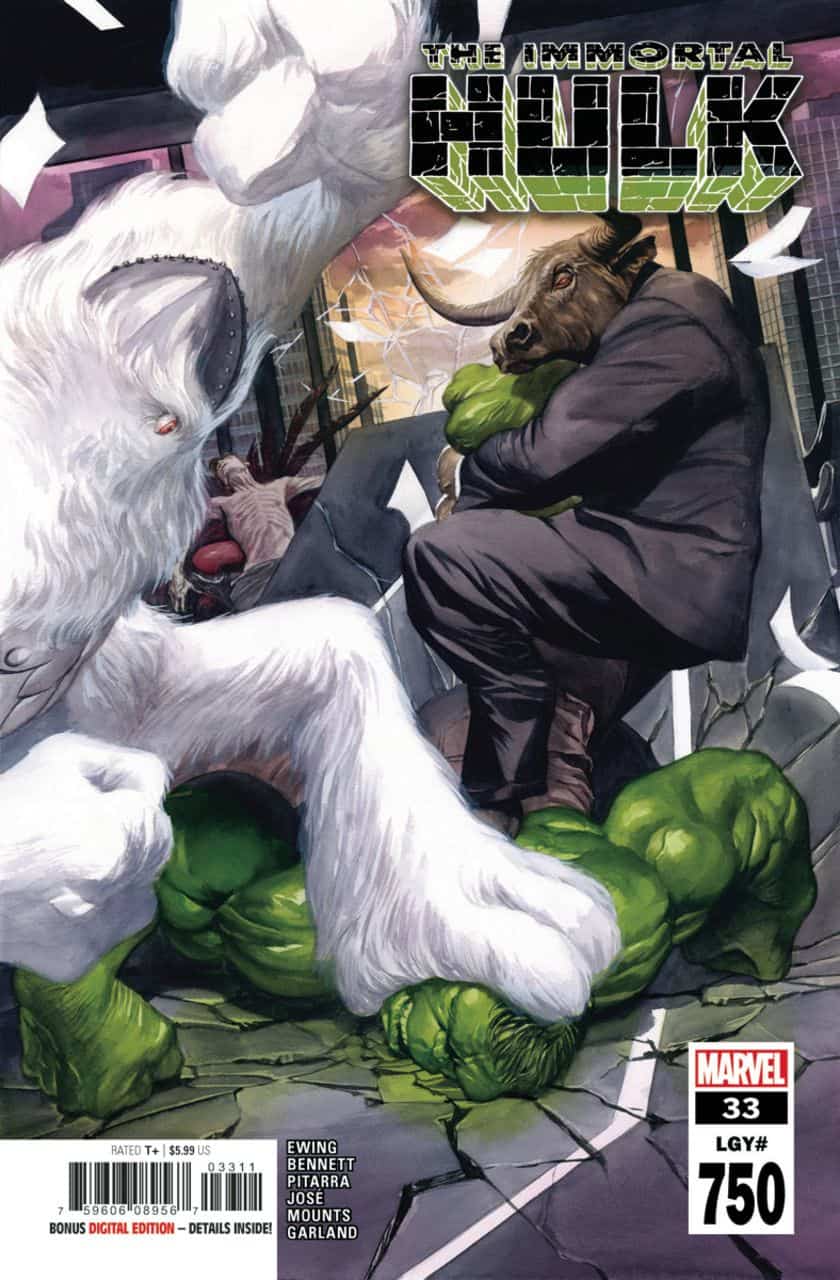 Immortal Hulk #33 – This is a huge issue, on so many levels.  First, it’s oversized and overpriced at $5.99, and features a massive battle between the Hulk and Xemnu.  Before that incredible sequence pops off, we get a tour of the Banner/Hulk mindscape drawn by Nick Pitarra, of Manhattan Projects fame, given by the Worldbreaker.  When the Hulk gets his act together and goes after Xemnu and Dario Agger, Joe Bennett outdoes himself completely. This issue ends with a surprise, setting up the next big storyline for this series.  Al Ewing’s Hulk has been amazing. I don’t know that any other writer has ever done something as experimental and bold with this character, and I love it.

Giant-Size X-Men: Nightcrawler #1 – I was excited to get this one-off featuring Nightcrawler, since when we last saw him in the main X-Men book, he was talking to Cyclops about how he wanted to start a mutant religion.  I figured that’s what this book would be about, but really, Nightcrawler is not all that prominent a character in it. He’s in a squad made up of himself, Magik, Cypher, Eye Boy, and Lockheed, and he perhaps contributes less than any of them to the story.  We get a little more information about what’s been going on with Doug, Eye Boy seems interesting for perhaps the first time ever, and Magik duplicates Kurt’s powers. It is nice to see Alan Davis drawing the furry blue elf again, and really, there’s nothing exactly wrong with this comic; it just wasn’t what I expected.  It feels a lot more Alan Davis than Jonathan Hickman, which is not a bad thing at all, but I was hoping for something more thought-provoking. 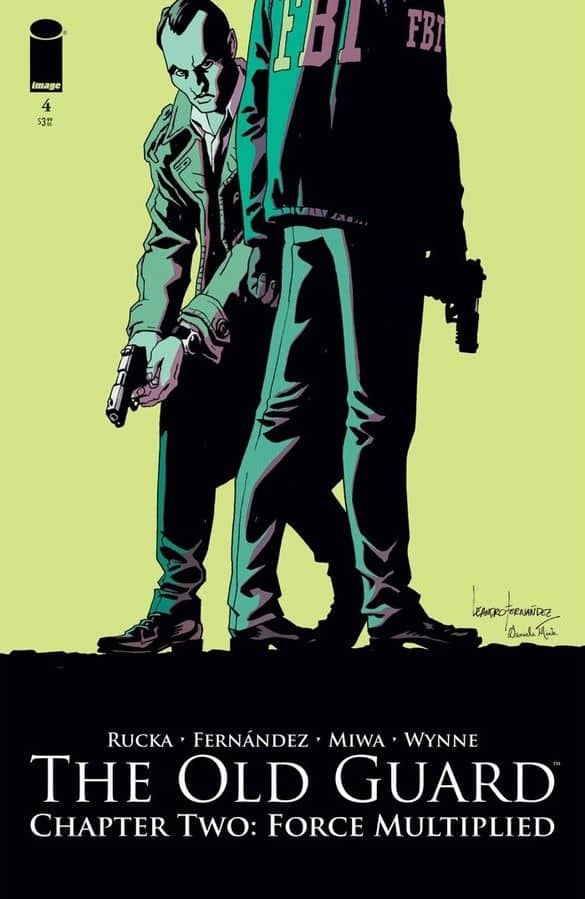 The Old Guard: Force Multiplied #4 – This issue of Greg Rucka and Leandro Fernandez’s series about a group of immortals really digs into the loneliness that that immortality can confer, especially for Andy, the leader of the group, who is the oldest of the group.  She finally gets the chance to talk to Noriko, her lover of centuries, but it seems like they are not going to be able to reconcile. I like this series, and look forward to seeing how it all ends at some point.

Once & Future #7 – Kieron Gillen and Dan Mora bring this series back for a second arc, and I am left wondering why I came back.  This series, about a resurrected King Arthur who is likely going to destroy England, and the old lady and her confused grandson who stand against them, is perfectly fine, but also appears to lack the subtext and exploration of the typical Gillen title.  Maybe I’m missing a lot of English myth stuff (I did think the ending of this issue was cool and has a lot of potential), but I’d rather we continue to focus on the relationship between Duncan and his grandmother more.

Shoplifters Will Be Liquidated #5 – I’ve become a fan of Patrick Kindlon’s writing through his work at Black Mask, but never really got a handle on this Aftermath series, which is about the pervasiveness of big box retail, the allure of corporate ideology for some, insider trading, actual subterranean cultures that are in ideological conflict with one another, and suicide.  There are just too many ideas being tossed around for this five issue series, and ultimately, anything happening underneath the Caucasus store made little sense, while all the parts of the book that interested me happened in the store. I feel like this series ended very abruptly, and from the first page, could have benefited from more aggressive editing. I’m still down to check out whatever Kindlon comes out with next, as I’d rather read an ambitious but messy comic than something that doesn’t try to stretch towards new ideas. 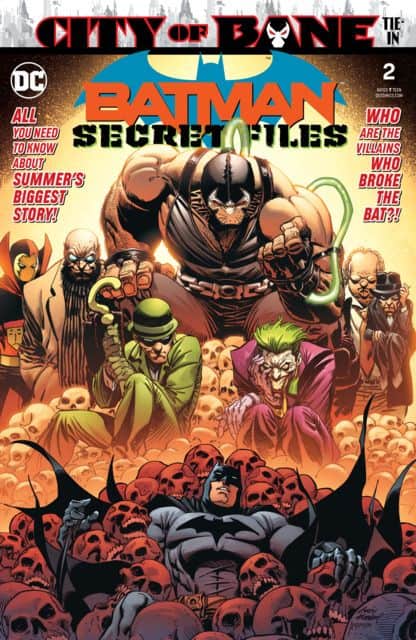 – These Secret Files anthologies are always a mixed bag, but this one has Steve Orlando and Eduardo Risso telling a dark, short story about Hugo Strange.  That made the whole thing worth getting. I also like Amancay Nahuelpan’s art in the Joker story that Andy Kubert wrote.

Doctor Strange #19&20 – Mark Waid wrapped up this run on Doctor Strange before continuing with the next one, Doctor Strange: Surgeon Supreme.  These two issues find Stephen fixing his hands, and then deciding to brush up on the latest in surgical techniques, in a quest to reclaim his former career.  So far as rationale for a relaunch, I think it’s incredibly weak, but otherwise Waid continues to do alright work with the good Doctor, who has never been the most interesting of characters.  This book punches above its weight class artwise, with gorgeous work from Jesús Saiz and Javier Pina.

Star Wars: Age of Resistance – Captain Phasma #1 – Phasma was never given a lot of screen time in the two films she appeared in, so it’s nice to see a little more of her here.  She’s a lot like Darth Vader, in that it’s easier to shape a story around someone interacting with her, which is what Tom Taylor does. We see how she can be both an inspiration and a danger to her subordinates, as a Storm Trooper draws her attention in this one-off.  I enjoyed it. 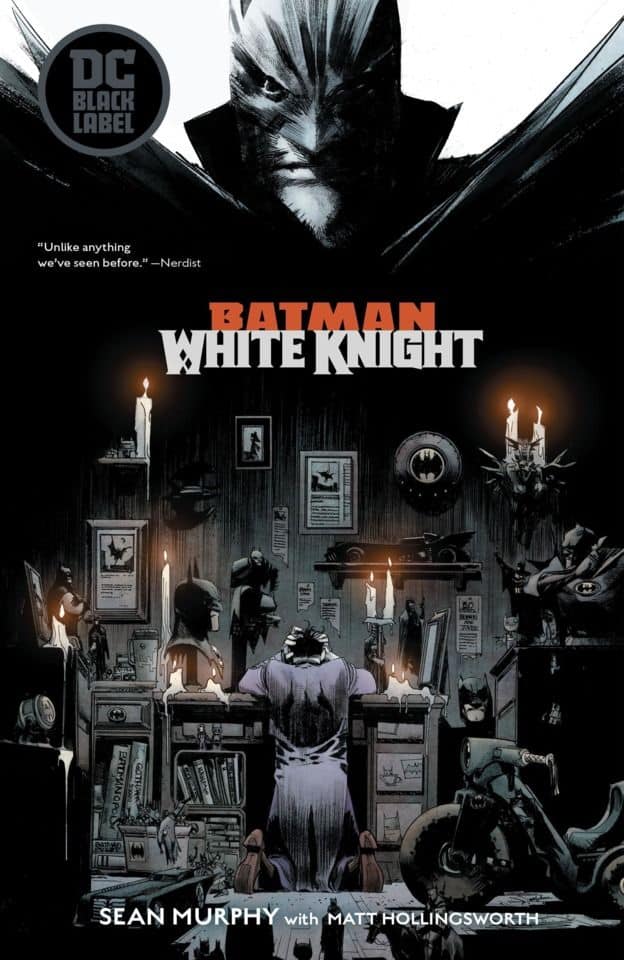 Batman: White Knight – I am a huge fan of Sean Murphy’s work (I loved Punk Rock Jesus, the first big series that he wrote and drew), but have reached the point in my life where I never want to read another comic featuring the Joker again.  I just feel that the character has been done to death, and that after Killing Joke, there’s really nothing more to say about him. That’s why I didn’t get this book in single issues when it first came out, although after reading some of the reviews I was aware that I’d made a mistake.  Having read this now, I have to say that I love it. Murphy gives us an Elseworlds approach to a Gotham where Batman lost his first Robin, Jason Todd, to the Joker early on in his career, and after replacing him with Dick Grayson and Barbara Gordon, never fully recovered. In the modern era, Batman is increasingly brutal in his tactics (it’s interesting that his outfit reminds me of the one we saw Damian wear as the future Batman), and is driving a wedge between himself and his allies and cities.  He ends up capturing the Joker, and in a fit of rage, forcing a handful of random medication down his throat that has the effect of curing him. The Joker, now Jack Napier, becomes a champion for the unequal, revealing the ways in which the city has been supporting Batman, and demanding that the disenfranchised, especially those in the community of Backport, get a fair shake. Along the way, we learn that there have been two Harley Quinns. The first one joins with Napier to try to bring Batman to heel and improve the life of citizens, while the other begins calling herself Neo Joker, and sets about finding ways to restore Napier’s insanity, and bring Gotham to its knees.  At times, there is way too much dialogue and exposition, but this book looks fantastic, and shows a very modern and sensible approach to the Bat-world. Murphy always has a thing about cool vehicles, and I get the sense that the Batmobiles were a big draw in creating this book. He’s definitely grown as a writer, and while I’d much rather see him work on a new creator-owned title, I’m curious to look into the sequel that has been running recently. This was a very good read.

– I’ve had no interest in checking out the Earth One graphic novels from DC.  They already reboot their characters from scratch often enough that I don’t see the need to read yet another reimagining, but this one is by Grant Morrison and Yanick Paquette, and that makes it different in my eyes (the others in the line have decent creative lineups, but none are by people I get that excited about).  Morrison structures the story around a trial Diana is on for having subverted her people’s laws when she accompanied the injured Steve Trevor to “Man’s World”. I don’t feel like Morrison has a lot of new things to say about Wonder Woman here; instead the book becomes an excuse to play around with some of the more kinky and salacious aspects of Paradise Island.  Paquette’s art is as gorgeous as it always is, and I find the odd mashups of Ancient Greek style and architecture with futuristic invisible swan planes and sky cycles to be pretty appealing. Ultimately, if there were a second volume of this, I’d really only be interested in it for the art. The story was kind of stale still.

This was a strong week for pairings of artists.

Matthew Tavares & Leland Whitty – Visions – I’m a big fan of local heroes BADBADNOTGOOD who brought live jazz to instrumental hiphop.  Tavares and Whitty are members of that group, and on this album they explore improvisational compositions, with Tavares mostly on keys and Whitty on flute and saxophone.  This is a nice late night groove.

Tony Allen & Hugh Masekela – Rejoice – Two legends of African music (Allen was there for the birth of afrobeat, while the late Masekela was a mainstay of South Africa’s jazz scene) gathered a few years before Masekela’s death and recorded the beginning of the pieces on this album.  Later, with the help of some luminaries of the British jazz scene, Allen finished this album, and we are all better off for it.

Linkwood & Greg Foat – Linkwood & Foat – I’ve been following Greg Foat’s career for a while, and admire his spacey brand of electronic jazz music, but I only just discovered this release, which marries Foat’s sound to lovely ambient house.  It’s quite nice.

DC Comics August 2022 Solicitations Spoilers: The Flash – Wally West & ALL OF THEM With Justice Society Of America / JSA – Play A BIG Role In Dark Crisis?!