The successful kickstarter campaign was described as per the below. 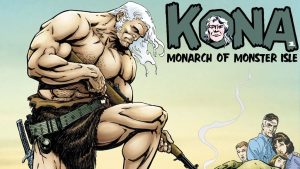 Welcome to the Kickstarter to publish KONA #1…one of the weirdest, wildest comics ever published is back! KONA: MONARCH OF MONSTER ISLE tells the story of a strange hero known only as Kona, saving the lives of Dr. Henry Dodd, his daughter Mary, and his grandchildren Mason and Lily, after this group crashes their army surplus blimp on the prehistoric Pacific island that Kona calls home. Befriending them, Kona becomes their protector, saving them from giant animals, monsters and much more! Originally published in 1962, this series has never been collected or reprinted until now! This issue sports a variant by comic book legend Bart Sears!

These limited edition covers will ONLY BE AVAILABLE from this campaign. KONA: MONARCH OF MONSTER ISLE was originally published in 1962, and therefore needs to be fully restored. We are lucky to have the brilliant Allan Harvey restoring each page of this incredible comic. Below are some samples of the work he is doing on this first issue. As many of you know I have worked hard for several years to bring the incredible work of comic book master Sam Glanzman back into print. We were even lucky enough to receive an Eisner Award nomination for the U.S.S. Stevens collection of true stories by Glanzman about his time serving in the Pacific Theater during WWII. But aside from his war comics, KONA might just be some of the most wild, unique pages that Glanzman ever illustrated.

I can’t wait to get KONA back into print for both the long time fans to enjoy, and for a whole new generation to discover! Your support will ensure this incredible comic book series lives on for years to come!

More art and details on the successful campaign are here.

The book is also now solicited to hit stores in June 2020, but that is possibly subject to change due to the current pandemic.