The campaign is on kickstarter and described as per the below.

Jungle Lords/Ultra! Two complete comics in one! 44-pages! A flipbook harkening back to the classic days of Marvel Comics!! 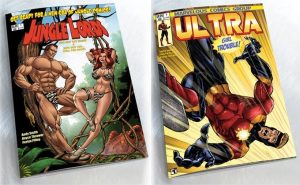 I’m Andy Smith and I’ve been a professional comic book artist for almost three decades. Some of my clients include Marvel, DC, Image, Valiant, Cross Gen and, currently, Ominous Press, where I’m the artist of Demi-God and also serve as the company’s art director. Check out some of my work at www.andysmithart.com. Go ahead, take a peek! I’ll be here when you’re done perusing my work.

Enough about me, let’s jump into my new project. That’s why you’re here, after all. I’ve had a lot of fun putting it together and I’m really excited for you to meet:

That’s right, a FLIPBOOK! Two books in one. Read one story, flip the book over and read another. Flipbooks are a format I’ve always loved but we just don’t see much of on the comic bookshelves anymore. So, with your help, I’m making my own!

There’s a long tradition of jungle-themed adventures in comics. I’m talking about books like SHEENA, JUNGLE GIRL, SHANNA, and CAVEWOMAN. It’s a genre I’ve always loved and I’ve been inspired to create my own, JUNGLE LORDS, the main story of this flipbook.

Anyway, Jane and Porter are hustling, making things work until a bad decision and even worse timing plunge them into a steamy, tropical world where danger lurks around every corner; where the noises of the jungle shriek through the night. A place where anything is possible and where, due to the strange, magical nature of this lost world, our ordinary couple is transformed into anything but ordinary.

It’s not all bad news for our cute couple, though. Remember the government job they were running? Well, during the storm, the “top secret” cargo they were transporting rips from its tethers and douses Jane and Porter. They pass out soon after and when they wake up?

Jane and Porter find themselves transformed from their ordinary, average selves into muscular, beautiful specimens. But wait, there’s more! They’ve also gained a few new powers and abilities that they’ll soon discover, and may just be the key to their survival, as this new, much-less-ordinary chapter of their lives begins…

More interior art preview and tidbits on the story here.

Now onto the flipside of this effort.

He ain’t no Superman. He’s…better?

ULTRA is 14 pages of story, plus bios of the three main characters as well as some behind-the-scenes art, plus maaaaaybe… a very special bonus Secret Origin story (if we can hit that stretch goal). This story is rated “T” for teens, language and brief nudity.

The story, titled “Girl Trouble,” finds our main hero Ultra caught in a love triangle between two superpowered women but, because our main man isn’t what you’d call the sharpest knife in the drawer, he doesn’t realize he’s in way over his head. Having two super-powered women on the line might not be what it’s all cracked up to be but it might end up cracking him in half!

Ultra, known to his friends by his normal name, Eugene, is a high school drop out whose past days of being the football star are long behind him. In front of him is his full-time gig at Walmart; being chosen as Employee Of The Month three times over the last six years has confirmed for Eugene that he’s made the right choice for his life. After a freak cosmic storm, Eugene finds himself imbued with superpowers and trying to do the right thing and help his fellow man.

Ultra’s heart is in the right place. It’s the rest of him that’s a little mixed up.

One of the lovely ladies in Ultra’s three-way love affair is PROTONYA. A mysterious woman that arrived at the same time Eugene gained his powers through…wait… I can’t tell you about his origin. If you want to know that, you’ve got to pledge and get a copy of the book…

Oh, but there’s more; it can speak for itself.

As I mentioned the book is rated “T” for teens because of a page of brief nudity and some of the language in the book. However, I am offering a limited amount of copies of the book with a page that is fans that like their comics a little spicy. Version A is the main story page and Version B (the black bars will not appear in the printed comic) will be in place of Version A in the book and will be limited in quantity. You choose which book you want!

Um, ok. Uh, if you want to support this campaign you can do so here.