The campaign is described as follows. 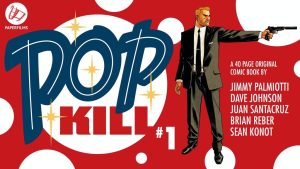 Hey everyone, and welcome back to our 13th Kickstarter. Yes, the bakers dozen of Kickstarters. We are so excited to get the oppertunity to distract you all from the madness going in in the world and offer you our latest campaign! The crew at PAPERFILMS has put together an exciting new project that we think you will love. Featuring some of the top talent in the field to present to you our 40 page first issue of an ADULTS ONLY comic mini-series called POP KILL!

Written by JIMMY [ Painkiller Jane, Harley Quinn, Jonah Hex ] PALMIOTTI and DAVE [ 100 Bullets, Red Son ] JOHNSON and illustrated by the amazing JUAN [ Painkiller Jane, Twilight Experiment ] SANTACRUZ with colors by BRIAN [ X-Men, Bloodshot ] REBER, lettering by SEAN [ Aliens, Aliens vs Predator ] KONOT and the brilliant design by John J Hill , the man responsible for so many great projects there are too many to list, but for the PAPERFILMS projects, he designed the PAINKILLER JANE Hardcover and the KILLING TIME IN AMERICA hardcover.

Imagine a world where the two dominant and competing Cola companies, each worth billions, are owned by former Siamese twins who are now separated and have grown to hate each other so much they hire assassins, saboteurs, and espionage personnel to meddle with each other on a daily basis. This is the story about brotherly love run afoul, and the people they enlist to do their dirty work.

Meet the beautiful DINA DELUX, a scientist in the Fizz division at POPSO COLA. She’s on the verge of creating a formula that will make soda 50% fizzier, keeping it carbonated longer than any other brand on the market. A breakthrough like this would put all the competition out of business in a heartbeat.
When Popso’s main rival FIZZ ONE COLA hear the rumors about the discovery, they activate their best man, JON PYLE, an oversexed mercenary, to take care of the situation. His orders are to convince Dina to switch sides, and if that fails, to eliminate her. However, after they meet the attraction is undeniable and a third option kicks in, one which triggers repercussions from BOTH sides.

Each book you buy will come with an official CERTIFICATE OF AUTHENTICITY pictured below with a variety of reward tiers consisting of 4 different covers being offered of issue 1 of POP KILL.

To learn more about this project and even to back it check out their kickstarter page.