Are you looking for a comedy that doesn’t involve people stuck indoors? Sean Hayes returns after a successful revival of Will & Grace to make a star studded film. He plays Susan, a woman who has been able to avoid growing up for quite a few decades. What happens when she decides to actually grow up? Lazy Susan comes out on Blu-ray in May. Here’s the press release from Shout! Factory: 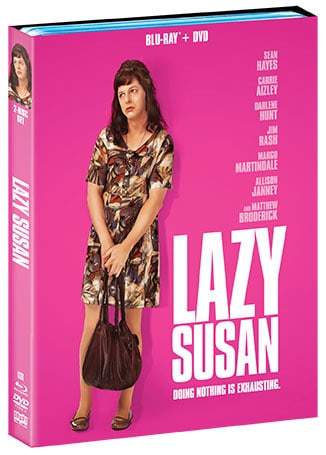 Lazy Susan
Doing Nothing is Exhausting

In Lazy Susan, Susan has always been the self-centered oddball in her family, who lazily skated through life with their grudging support until one day she wakes up to realize she’s middle-aged with no job, no relationship, and an increasingly estranged family. She finally decides to take charge and turn things around, but never having done anything herself before, the struggle is real (and hilarious) as Susan becomes the woman she always wanted to be, all on her own.