The campaign has both Kickstarter and Indiegogo pages, has been fully funded, with material trickling out.

Here’s’ the most recent update from April 15, 2020 from Jan Duursema and John Ostrander.

THE HEXER DUSK PDF IS HERE!

Great news! The HEXER DUSK 84 page graphic novel PDF is ready to send to you! Yes–it’s true! It makes us incredibly happy that all of you who backed Hexer Dusk will finally get to see our story, “SCAVENGER”, as well as the bonus 10 page, “SHADOW WOLF”–and sketch pages! We’re also going to put up some wallpapers to download for those who backed that level and up.

The not so great news is that the printed version of Hexer Dusk is going to take a bit of extra time as printing and shipping have been impacted by longer shipping times and less workers at the printers due to Covid-19 and isolation orders. But, the printed Hexer Dusk WILL be happening. We just wanted to get the PDF out to everyone during this trying time for you to enjoy. The road has been and continues to be a bumpy one… but you’ve been amazing and have stuck by us through it all! A big, heartfelt thank you to every one of you wonderful folks for your faith in us and your unwavering support!

The link will be posted shortly. We hope you enjoy Hexer Dusk!

Here’s more on the project. 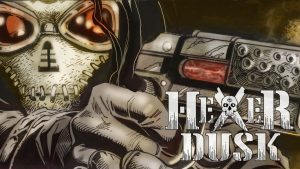 The Obsidian galaxy. Five years after the devastating Chaos War. The Sky Cities have fallen from the sky, other-dimensional creatures called the Weird have emerged from the rift caused by the Sky Cities destruction. The Weird can’t survive here for long unless they take a being to use as their shell. Living or dead–it doesn’t matter to them. Hexers are the only ones who can destroy the Weird–and most of them died in the Chaos War. Hexer Xane Dusk is one of the last Hexers.

“My name is Xane Dusk. I’m one of the last Hexers. Time was, being a Hexer was an honorable thing. We protected, we served; we had a Code. That all changed the day the Sky Cities destroyed each other in the Chaos War. I was a soldier–I was there. I saw it happen. The destruction of the Cities burned a rift between dimensions–a big hole that let other-dimensional creatures through to Obsidian galaxy. We called them the Weird. They can’t survive here long unless they find a body to inhabit. Lucky for them, they’re good at grabbing up both the living and dead to use as their shells. Bad for us. Maybe now us Hexers finally have a true enemy to fight–if the Razers don’t kill us all first. Sever taught me that what Hexers did was for the good of the galaxy. These days, I do what I must and my reasons are my own. My name is Xane Dusk. I’m one of the last Hexers.” 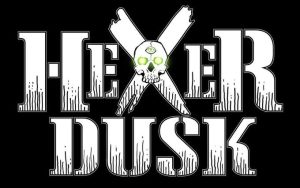 Most of my dreams are pretty mundane, but not the one that inspired Hexer Dusk. It was one of those dreams that feels real– like you are there. On an alien world, I watched as two sky cities began to light up–then explode–like suns going supernova. As the dying light washed over the landscape and the debris began to fall, I knew that everything I’d ever known had changed…

The dream didn’t stick around to tell me the rest, but the images haunted my daydreams. The bones of the world of Obsidia and rogue Hexer, Xane Dusk, evolved over the next couple of years–a post-apocalyptic galaxy of martial magic, monsters, alien species and grungy tech.

John Ostrander and I had a blast collaborating on Hawkman for DC and Star Wars stories at Dark Horse. We created Legacy, Cade Skywalker, Quinlan Vos, Aayla Secura, the Imperial Knights and a legion of other characters. None of these characters belonged to us, but we gave them our hearts and souls anyway because we were doing what we love to do!

John and I have a dynamic collaboration process. We weave our ideas together and the end result always gets me excited to draw the story. We’d often talked about doing something creator owned, so it seemed like a given that we could bring the kind of energy and teamwork we’d brought to other projects to Hexer Dusk. I told John about the story and he agreed that it was perfect for the Indy project we’d always wanted to do.

Those of you who know John’s and my work, know that we’re passionate about art and story–and about creating characters, creatures and worlds for them to inhabit. For me, Hexer Dusk is the amalgam of everything I love to draw and imagine. For both John and me, it’s a new far away galaxy to explore.

I hope you will take a look at this Kickstarter–and if you like what you see–if you’re curious to see more, stay a while and explore this new galaxy with us. This is the first Hexer Dusk story–but we have a lot more stories we want to tell– who am I kidding– that we need to tell!

The Fall of the Sky Cities. That’s what grabbed me. The image, the idea, of two great cities at war, with high towers, massive and incongruously floating above the planet, exploding and falling in mutual destruction. I could see them. I could hear them – a terrible noise. I could almost smell it. That’s what grabbed me when Jan told me about the idea she had for Hexer Dusk.
That’s what you look for when you’re starting a project – something that excites your imagination, that makes you ask questions, to want to know more, to know what it means. To know what the story is. With the images came words, all evocative: Obsidian. Scavvers. The Weird. Skargle and The Missus. Kombot. Hexer Dusk. That’s how a story is grown. Those are the seeds. That’s how it starts. An idea, an image that comes from within you and that you need to incarnate. To make physical. To make real. And it’s already begun.

HEXER DUSK WILL BE A FULL COLOR 72 PAGE GRAPHIC NOVEL!

A seven page preview, cover art and concept art available via the earlier crowdfunding links or at HexerDusk.com.