Fans of Svengoolie will get a sweet treat in June when Scream Factory’s Universal Horror Collection: Volume 5 arrives on Blu-ray. The four films featured in the boxset bring out the animal with mad scientists gone wild.

The Monster and the Girl has an innocent man get executed after being framed by a mobster for murder. Luckily a mad scientist (George Zucco) saves the dead guy’s brain and puts it inside a gorilla. This leads to the ape going for revenge on the underworld. Zucco was a horror superstar at this time having appeared in The Mummy’s Tomb, The Mad Monster, The Mad Ghoul, The Mummy’s Ghost, The Mummy’s Hand and House of Frankenstein.

The other three films are the Paula Dupree trilogy. Captive Wild Woman (1943) has Milburn Stone (Doc on Gunsmoke) as a superstar animal trainer. He hooks up with a mad scientist (House of Dracula‘s John Carradine) to put human glands in a gorilla. To their surprise the gorilla turns into a woman (Acquanetta). After a second operation, the ape is now a proper woman that they call Paula Dupree. But has the female beast truly become human? Jungle Woman (1944) has Dr. Carl Fletcher (House of Frankenstein‘s J. Carrol Naish) explain what went wrong in his relationship with Paula Dupree. Things wrap up with Jungle Captive (1945) as Rondo Hatten (Brute Man) revives Paula Dupree’s fortunes. This time a biochemist (Magnificent Obsession‘s Otto Kruger) thinks knows where the last two mad scientists went wrong. Is Paula Dupree going to be fine this time? She’s a different woman since Vicky Lane took over the role for this final outing.

So get ready to go ape when Universal Horror Collection: Volume 5 arrives on June 16. Bonus features will be announced closer to release date. Here’s a sneak preview from Scream Factory: 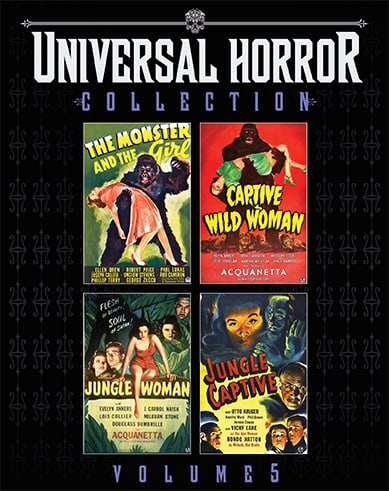 GET READY FOR MORE THRILLS AND CHILLS!
Volume 5 of the Universal Horror Collection includes four tales of terror from the archives of Universal Pictures, the true home of classic horror. A mobster’s brain is transplanted into an ape who carries out his revenge in The Monster And The Girl. A mad scientist turns an ape into a beautiful, but deadly woman in Captive Wild Woman. Jungle Woman, the sequel to Captive Wild Woman, is an eerie thriller with all the danger of wild animals on the loose and a sexy killer on the prowl! And in The Jungle Captive, a scientist has experimented on re-animating animals … but now he has decided to go one step further and re-animate a human!