It’s now been five weeks without new comics (none of DC’s first releases through their new distributors interest me).  I’ve gotten a lot further into the stacks of comics and the dwindling pile of graphic novels I’ve been stockpiling for just this type of event. 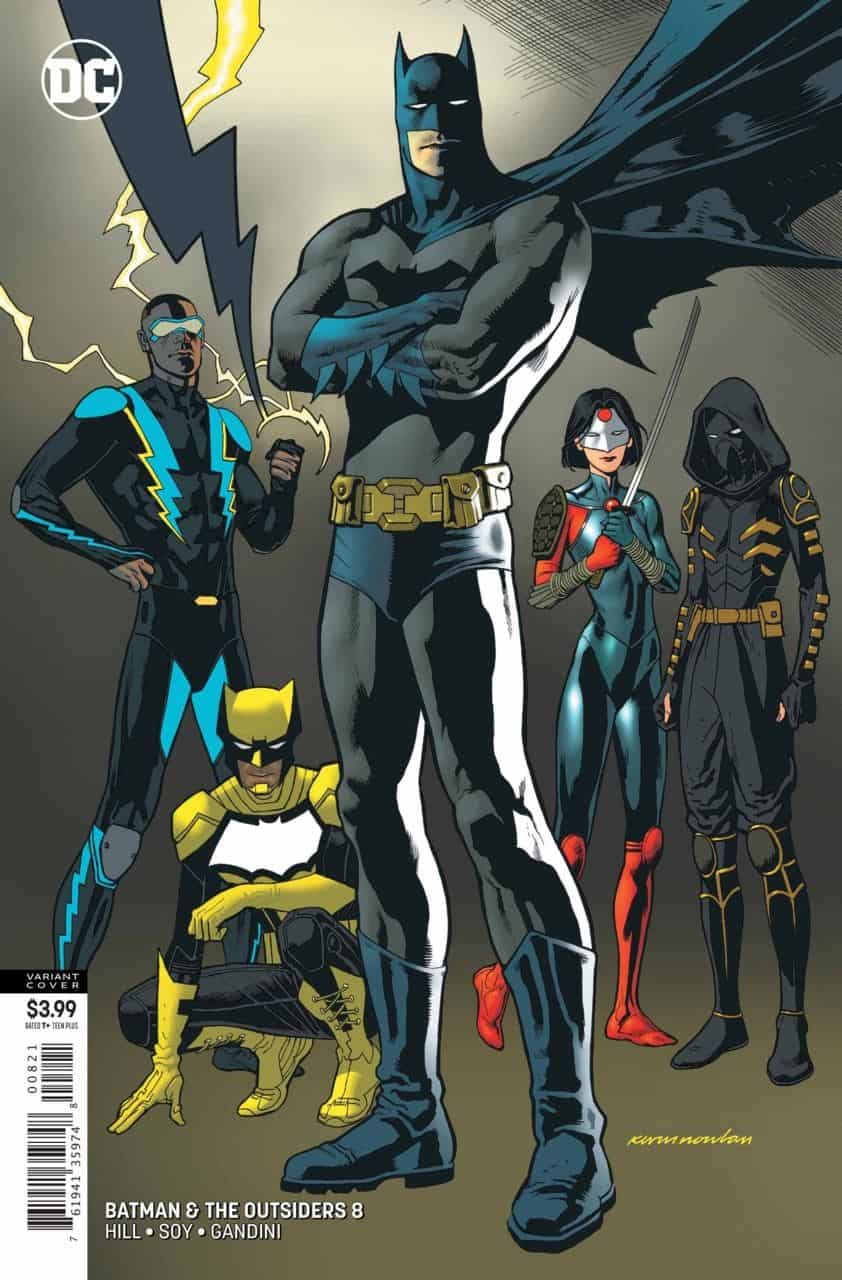 Batman and the Outsiders #1-8 – I expected a lot more coming into this book.  This is a cool team, with Black Lightning running a squad that includes Katana, Orphan, and Signal, with Batman more or less hanging back in the shadows and pulling everyones’ strings.  There are problems though.  Duke’s pushing back against Jefferson doesn’t work on many levels; it’s not how we’ve seen Duke before now, and as a teacher, Jefferson wouldn’t be so quick to fall into power struggles.  In eight issues, Bryan Hill doesn’t do a whole lot with these characters, and I feel like it’s way too soon for the team to be facing off against someone like Ra’s Al Ghul.  I will say that some of these issues sport amazing Kevin Nowlan covers, while the interior art by Dexter Soy (mostly) is pretty much just alright (but much better than his Captain Marvel run).  I’d like to say that there’s a lot of potential in this book and team, but I’m not sure I care enough to come back for more.

Batman and the Outsiders Annual #1 – After Flashpoint, the New 52, and Rebirth, I have no idea what has happened in the DC Universe before now, and what hasn’t.  Are Black Lightning and Katanna friends with years of bonding between them, or are they relatively recent acquaintances that feel their friendship growing?  This is not made clear here at all, as Jefferson stands guard over Tatsu as she enters her sword to rescue the soul of her dead husband.  This issue was fine, but didn’t need the expanded page count, as Bryan Hill never really drew me into the story, nor did he say much that was new about these two characters. 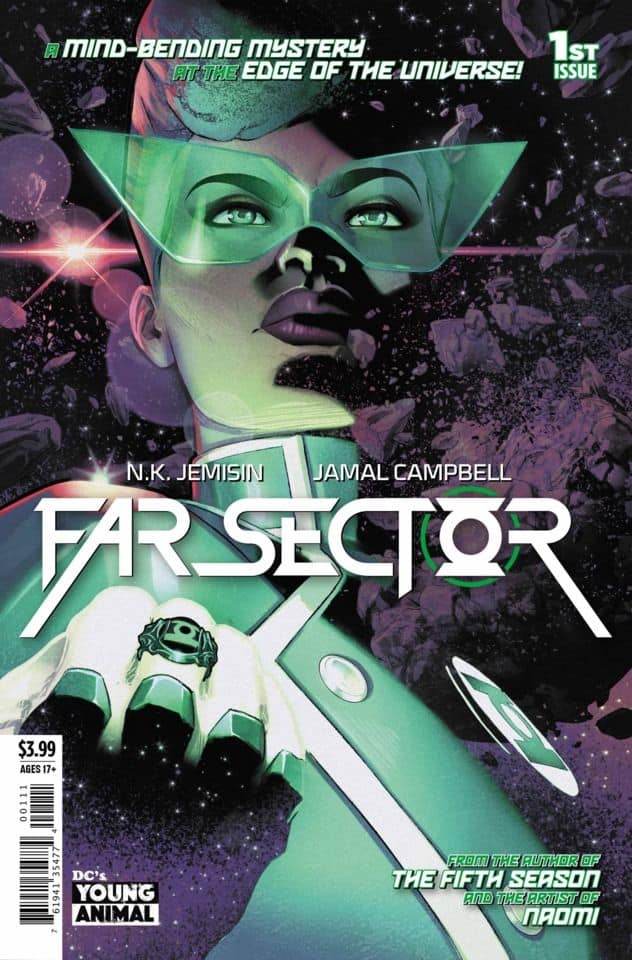 Far Sector #1 – The New Yorker recently ran a profile on NK Jemisen, the novelist who makes her comics debut with this hard sci-fi Green Lantern story that’s published under the Young Animal imprint.  When I saw this book being solicited, it looked interesting, but because I didn’t know who Jemisin is (I don’t read fantasy or sci-fi novels), I passed.  That was a big mistake, as this is an excellent debut issue.  GL Mullein has been sent to a very distant corner of the galaxy, to The City Enduring, an artificial world peopled by three species who have a very complicated intertwined social structure.  There is a murder in the city, the first in 500 years, but this is more than a simple murder mystery series; there’s a lot more going on, and Mullein finds herself wrapped up in it.  Jemisin’s writing is very good.  She has a lot of information to impart in this issue, but she manages to avoid the excessive wordiness that accompanies most novelists on their first journey into comics.  Jamal Campbell’s art is typically wonderful, and helps capture the weirdness of this world beautifully.  I really wish I had the rest of the released issues of this series here with me…

Inferior 5 #1-3 – I want to start this by saying that Keith Giffen is one of the creators that I admire and respect the most in comics, and I’ve been a fan of his multifaceted career since the late 80s.  This series though, is a bit of a mess.  First off, DC downgraded it from a twelve-issue series to a six-issues series somewhere between the publication of issues 2 and 3.  The series is made up of two stories – the main one by Giffen with writing assistance by Jeff Lemire, who is the writer/artist of the backup story.  Apparently, although this wasn’t immediately clear, this story is set in the late 80s, after the Invasion miniseries that Giffen wrote at the time (I never know what’s going on with DC’s continuity these days).  There’s a small town that appears to be a front for a Dominator project that has something to do with kids who lost one parent during the invasion, but never more than five of them.  Some D-list characters like Brother Power and the Tasmanian Devil are around.  Giffen’s art is as challenging and alluring as ever, but I didn’t much care about what is happening in this story.  The backup features Peacemaker, the hero with the fantastically weird helmet, and features Ostrander-era Amanda Waller and the KGBeast, but it doesn’t make a lot of sense either.  I had high hopes for this book, and love the idea of Giffen and Lemire collaborating, but this is not what I was looking for.  I can’t imagine twelve issues of this…

Pearl #6-12 – The second half of Brian Michael Bendis and Michael Gaydos’s Pearl is very indicative of a Bendis series.  The story jumps around, the dialogue is stilted in places, and at times the action is difficult to follow, but it also has strong characters and a certain boldness to it.  Pearl Tanaka wants her father free, and wants to confront her Yakuza ties.  She ends up going to Japan, where she learns a few things about her role in the organization.  I liked this book, although I did find myself thinking about cultural appropriation a fair amount.  Gaydos’s art is gorgeous on every page, and I would return for a new Pearl story, should they decide to make one.

Bone Parish Vol. 1 – I get so annoyed with the four-part trade paperbacks that Boom! insists on putting out.  The first two issues of this interesting series by Cullen Bunn and Jonas Scharf are used to set things up, and most of the fourth is built around reacting to the events of the third.  As this volume ends, I’m in the position of being more interested in reading the rest of the story, yet that’s it.  There’s no closure, as this isn’t an arc.  Anyway, this series is good.  Bunn gives us a family that deals in the new drug ash, which requires dead bodies to produce, and which leads to powerful hallucinations of the life of the dead person, or at times, interactions with them.  This drug is bringing in the interest of people from New York, and from Mexico, with all the threats and problems that brings.  I would have liked to have a little more time to get to know these characters, but I was into it. 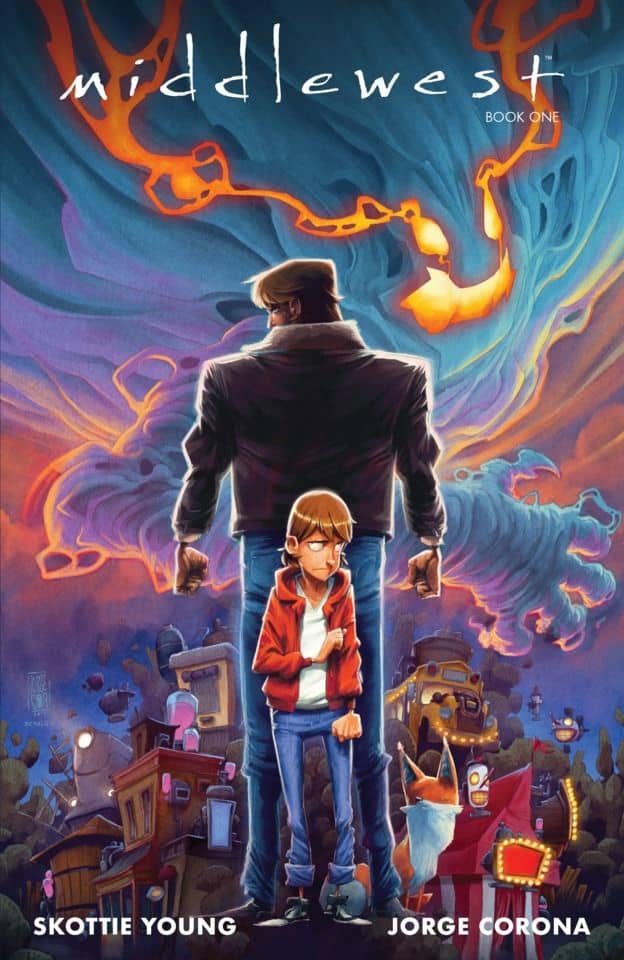 Middlewest Vol. 1 – My reaction to the first volume of this series by Skottie Young and Jorge Corona is pretty mixed.  A young boy named Abel lives in a small town with his abusive father, and when he gets in trouble for shoplifting, things take a very dark turn.  It turns out that his father contains a real storm in him, literally, and that infects Abel as he runs away.  Abel learns that he now has the storm in him too, and his quest to receive some help sends him to a family-run travelling carnival, where he finds some of the things he’s always lacked.  All of that works for me, but the world that Young and Corona are portraying is deeply weird.  Some animals talk, such as Abel’s fox friend, and everyone seems to find that normal.  Trolls live in covered bridges, and technology apparently needs large receptacles of a pinkish liquid attached to it to run.  None of these things are explained, and I had a hard time reconciling the language of the book with its obvious young adult themes.  I couldn’t escape the feeling that Young could not entirely decide who his audience is, so he went with a very toned-down mature readers approach that was probably more limiting than appealing.  The thing is, by the end of this volume, I found myself caring about Abel and his plight, and enjoying Corona’s busy artwork.  I will be seeking out the rest of this series, I think.

Solid State – Projects that attempt to combine music and comics never quite work out, and seeing as I don’t know who creator Jonathan Coulton is, but I was intrigued that he got Matt Fraction to help him write this graphic novel that accompanies his album of the same name.  This is an odd book, which focuses on Bob, a worker buddy in what appears to be the type of society that unregulated social media might create, after the world falls apart.  Bob is starting to question the structure of society, especially after his helmet breaks and because of some Kafkaesque logic, he’s unable to get another.  This is also the story of another Bob though, who works at a Facebook-like social media platform, but questions the morality of it.  Most of the heavy lifting is left for the reader to do, but I really enjoyed Albert Monteys’s art, and was curious to learn more about what was going.  The stuff about the moon threw me, though…

44th Move – 44th Move – This is a collaboration between the excellent Alfa Mist and Richard Spaven.  It’s a short EP that explores jazz, hip hop, and break beats, and was the coolest thing I listened to this week.

Skyzoo and Dumbo Station – Bluest Note – Skyzoo has been around for a long time, but I’ve not paid a lot of attention to his work.  This EP with Dumbo Station is the kind of jazzy hip hop I love.