Remember a few years ago when eight different political candidates swore that after praying really hard, God had told them that they would to be the next president of the United States? Not one of them dared to ponder why God would have said that more than one of them was being called to be president. Strangely enough, when their campaigns went down in flames, not one of them quit the race by saying, “I guess I wasn’t really chosen.” Three Christs is about an even more extreme circumstance when three men swear they are Jesus and all end up in the same mental institution. Can any of them admit they might not Jesus? The movie comes out on Blu-ray on June 16. Here’s the press release from Shout! Factory:
Three Christs 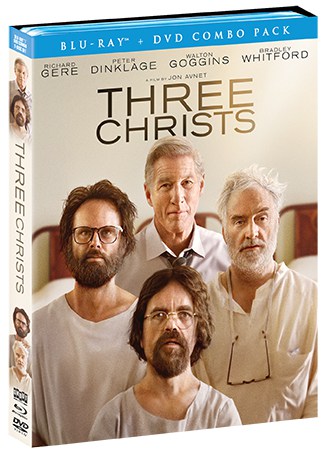 Richard Gere leads a tremendous cast in a fascinating and moving exploration of the human mind. Based on a remarkable true story, this compelling character-driven drama makes its Blu-ray and DVD debut June 16th, 2020 from IFC Films, in conjunction with Shout! Factory. Fans can pre-order their copies now by visiting ShoutFactory.com

In 1959, psychiatrist Dr. Alan Stone (Richard Gere) arrives at a mental hospital in Ypsilanti, Michigan armed with the radical belief that schizophrenic patients should be treated not with confinement and electroshock therapy but with empathy and understanding. As his first study, he takes on the particularly challenging case of three men — Joseph (Peter Dinklage, Game Of Thrones), Leon (Walton Goggins, The Hateful Eight), and Clyde (Bradley Whitford, The West Wing) — each of whom believes they are Jesus Christ. Hoping that by getting them together in the same room to confront their delusions he can break through to them, Dr. Stone begins a risky, unprecedented experiment that will push the boundaries of psychiatric medicine and leave everyone involved — including Dr. Stone himself — profoundly changed.