I have been really put off wrestling of late. The empty arena stuff is draining me. Watching the old PPVs (especially WCW) is draining me. WWE is draining me. AEW is not as much fun, even if they have a sort of crowd there. But I am a creature of habit, and so I watched AEW’s Double or Nothing PPV (May 23, 2020). It was fine. The matches needed a crowd, though. A real crowd.

Okay, look, I thought the Boneyard Match at Wrestlemania 36 was great. Fantastic, in fact. It worked so well. That Firefly Funhouse Match was a waste of my time. The Money In The Bank On The Roof Murder Match was okay, but the editing and the camera shots were appalling. The wrestling was fine, I liked the results, but the way it was shot was so far short of WWE’s normal proficiency. However, it still felt… weird.

So, I was not looking forward to the main event of AEW’s latest PPV.

How can I put this?

I know – this was the most fun I have had watching a wrestling match in a long, long time. Was it as good as the Boneyard Match? It was different, and I came away having smiled and laughed and being enthralled more than I did during that match, so I think I enjoyed this match more.

I’m not going to do the whole show. There is very little I can say. The tag team number one contender’s match on the pre-show was given a lot of time and was a good match which the Best Friends won. The ladder match was pretty good, which a debuting Brian Cage won. MJF defeated Jungle Boy in a great match. Cody defeated Lance Archer to become first TNT champ in a good match. Kris Statlander defeated Penelope Ford in a mediocre match. Dustin Rhodes defeated Shawn Spears in an okay match. Hikaru Shida defeated Nyla Rose to become new AEW women’s champ in a good match. Jon Moxley defeated Brodie Lee to retain the AEW Title in a good match. That was it. Good matches. Nothing blow-away (except maybe MJF/Jungle Boy). Bit bland, to be honest, but watchable and nothing was terrible. 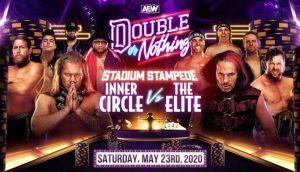 1. I loved the entrances as football teams (apparently the numbers on the Inner Circle’s jerseys all meant something) and the cheerleaders (all wearing AEW face masks!) and the mascot and the referees with whistles – it felt different from the word go. And Hangman Page’s late entrance on the horse was a great visual.

2. The match started off around the ring on the fifty yard line as a standard brawl with weapons and stuff. I was worried about now – this was not going to be that was it, another wrestling match just outside the building? The cheering of the crowd watching back where the rest of the show was filmed was excellent, by the way.

3. No need to worry. After Matt Jackson hit a moonsault from the top of the goal posts, it went into the stadium and things became awesome. They used their surroundings well and just beat the living shit out of one another.

4. Ortiz and Santana with Hardy in the swimming pool was incredible, and that was where the whole cinematic wrestling universe was used perfectly. They tried to drown Hardy, but every time he came up he was an old version of himself. The Hardy Boyz version, Mattitude v2.0 (with a Matt(er) Fact!), then back to Broken. I laughed my arse off. Then the “chair of wheels” and the ice box… holy crap, I was laughing so hard.

5. The bumps looked absolutely insane! Onto concrete! Onto a freakin’ pool table! Ouch! I mean it – holy shit!

6. The referees were awesome! Aubrey Edwards was amazing – arguing with Jericho who called for a video replay (and they went into the tent), holding her arms up for a touchdown when Jericho was thrown into a kicker’s net, she was a highlight. But we can’t forget the ref who tried to penalise Matt Jackson for an Alex Wright celebration in the end zone and got superkicked for his trouble. They were great.

7. The bar-room brawl between Page and Hager looked nasty, then Omega joined in and they just killed Hager with the bottles o’ the bubbly! Hager running Page down the bar like in an old Western was such a cool visual… with replay. (The crowd chanting, “Horse! Horse! Horse!” made me laugh for whatever reason.) That bar-buckshot lariat was great. And then the whiskey and milk celebration.

9. Jackson Deville, the mascot ate a Judas Effect elbow in a great visual. So was Nick Jackson running down the stairs to do a splash through a table onto Jericho. But those visuals were not as great as Hangman Page using the line marker on an unconscious Jericho from crotch to face.

10. After being chased by the golf cart again (from Dynamite a few weeks ago), Guevara took a one-winged angel from off the stands to be pinned by Omega and give the Elite the victory.

Wow. Oh, and the commentary team of  JR, Tony Schiavone and Excalibur sounded like they were enjoying things as well.

Was this the greatest wrestling match ever? No! Don’t be a moron. Was it one of the most fun wrestling matches ever? Top 10, easy. Did I enjoy it? Me, a 50-yr-old who spent years in very low level promotions, who prefers 1980s wrestling? Me, enjoy it? 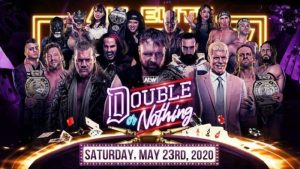