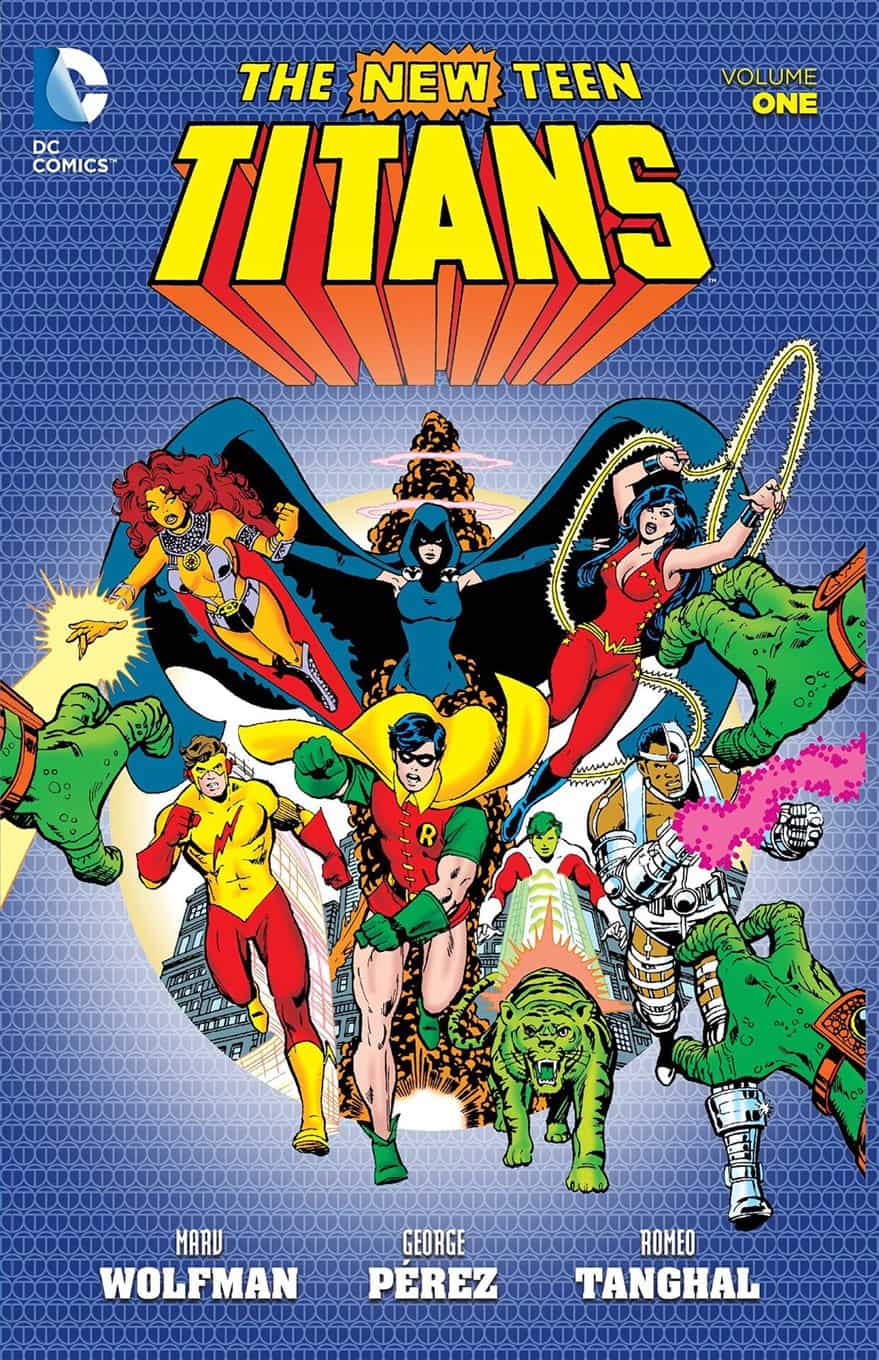 Spoilers from thirty-nine to forty years ago

I’ve never read Marv Wolfman and George Pérez’s classic New Teen Titans run.  I think I’ve sampled issues over the years, but back in the day, when these comics first came out, I wasn’t reading a lot of DC books, and later on, when I started to read more widely, this series never appealed to me, and Pérez had moved on.  I didn’t really learn to appreciate Pérez’s art until he started to draw Wonder Woman, but didn’t love his work until he was on The Avengers with Kurt Buiek in the late 90s.  Also, I’ve almost always found Wolfman to be a slightly boring writer.  Beyond that, I was never that interested in the characters, and have always pointed to Jericho and Nightwing (in that order) as having two of the worst costumes in comics history.

So why am I reading this now?  There’s a few reasons for that.  One, like I said, I gained respect for Pérez’s art, and have always wanted to go back and trace its evolution.  Also, as I’ve gotten older, and as comics have gotten both more complicated, and less attached to their history, I’ve become more interested in the type of storytelling that was done back in the day.  The third reason is that, just as I was starting to think about acquiring these comics, I came across a stack of these trades (Vol.2 to 9) for just $5 each.  And, now, during the lockdown, I’ve read all the other trades I own, so it seems like a good time for this, even though I’m still deep into my Legion of Super-Heroes reread.

There was a time when this series rivalled the X-Men for respect and popularity, and as a kid, that didn’t make sense to me.  I wonder how I’m going to feel about it now…

Let’s find out how it is.

Well, I’m a little worried about having taken on this project now.  I don’t think I enjoyed this book very much at all.  I have problems with the plotting, the characters, and the structure of the team, and while I felt things got a little better towards the end, I’m not sure that my worries are alleviated at all (and I have like 8 or 9 more volumes sitting on my shelf to get through).

This team is put together by Raven to fight off Trigon, but she is so manipulative and underhanded, that I’m surprised the team continues to exist after that threat is expunged.  Then, while the team is floundering around, trying to figure out what to do about the threat Raven doesn’t tell them about, they get swept up into a plan to destroy the Justice League, who after having taken care of the surface of that problem, decides that their work is done, leaving their former sidekicks to their own devices.  At the same time, we have HIVE, a new villainous organization, decide that they need to destroy the Teen Titans, for no good reason, all while Deathstroke decides he hates them because his son didn’t like them and got himself killed over it.  I also completely missed the reason why the Fearsome Five were after the Titans, unless it was all about Psion being manipulated by Trigon.

A big part of the problem is that I can’t quite get through Marv Wolfman’s lengthy prose boxes.  I know that was the style at the time, but I’ve always felt that Wolfman’s writing tended towards the dull, but I can’t make my way through any narrative box involving Raven.  I am pretty sure I hate Raven, but I’ll come back to that.

One probably unintended recurring feature of this book is the number of time villains knock out someone on the team, and then leave them, or somehow teleport them back home.  It gets tiresome.

Now might be a good time to talk about the characters.

Robin – This is an interesting era in Robin’s career; he’s trying to strike out on his own, but his entire identity is closely tied to Batman.  Also, he’s kind of a boring character, and is given comparatively little to do in this book.

Wonder Girl – Donna, by contrast, seems to have a lot more going on, in terms of holding the team together and showing leadership and effectiveness in the field.  Little is done with her as an individual character until the last issue in this volume, when it’s revealed that she’s dating a much older divorced man (I’m sure I’m going to have more to say about this in later volumes).

Kid Flash – Wally is the last of the sidekick characters, and he feels off throughout this book.  We’re never given a clear look at why he has feelings for Raven, so it makes sense later when we learn that she manipulated him.  He does very little in this first volume, except get angry with Robin.

Changeling – I don’t know much about Gar’s history as Beast Boy prior to his rebrand here, but his relationship with the other Titans feels more forced than his cheesy one-liners.  He’s incredibly rich (Donna has a nice place, but his mansion is incredible), but seems lonely.  He didn’t do much in this book either.

Starfire – Kory is an interesting addition to the DCU, and Wolfman handles her well.  We get to see Earth through her naive eyes, and also get to enjoy her lack of shame.  It’s hard to buy that she’s so kind after the life she led, as a slave to an alien race, but that’s what makes her interesting.

Cyborg – Vic is the other character that’s made the most interesting in this book.  He starts the volume as very angry, but after going through the forced closure montage with his dying father, he starts to grow as a character and a person, and becomes a lot more likeable.  I still don’t buy that his father is a master cyberneticist who also knows how to open dimensional portals, and is able to build Titans’ Tower in secret in a matter of weeks, but it’s early 80s comic logic.

Raven – I hate Raven.  First, she’s the all-knowing character who manipulates the team into existence, and then she’s a coward who keeps appearing and disappearing during fights.  She doesn’t come off as a very empowered young woman, and her inner conflict with her pacifist teachings comes across as facile and irritating.  Her power set is never made very clear (how can her soul carry bombs?), and in most panels, she’s just standing in place with her arms up in the air.

Part of the reason why I decided to get all of these trades is that I wanted to appreciate George Pérez’s evolution as an artist.  This is definitely early Pérez, and for much of the book, I wouldn’t immediately recognize it as his work.  Raven is distinct throughout, but most of the time, this looks like standard 80s DC house art.  The difference is in the layouts, which often make use of the long narrow panels that I’ve come to recognize as a hallmark of his work.  The art in this book is good, but I think it’s going to be cool watching him grow into his distinct style.

Part of the problem with Pérez is his sense of design, but at this point, his designs (like for Deathstroke and Starfire) are pretty iconic.  Cyborg is unfortunate in all sorts of ways (I don’t know why he’s wearing a speedo when a pair of pants would go a long way towards hiding his artificial legs), but it’s the 80s.

I have some hope that things will improve in the next volume.  I don’t see yet why this became DC’s most popular book, rivalling the X-Men at the height of their popularity, but I’m prepared to put in some more time to watch things develop.