Legendary Cartoonist Retires After 73 Years, 56 Years Of Which At MAD Magazine, At 99 Years Old! Al Jaffee Calls It A Career After Pioneering MAD’s Fold-In / Fold-Out Art! 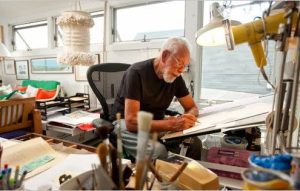 Mad magazine’s iconic back-page Fold-In is about to fold it in. Finito after 56 years. Because Al Jaffee, officially the longest-working comic artist ever, has decided to retire at age 99.

So to mark his farewell, Mad’s “Usual Gang of Idiots” will salute Jaffee with a tribute issue next week. It will be the magazine’s final regular issue to offer new material, including Jaffee’s final Fold-In, 65 years after he made his Mad debut.

“He deserves some spotlight outside our industry,” Mad caricature artist Tom Richmond said of the magazine’s beloved elder statesman, who broke into the business during World War II.

One of the most heartfelt features in the send-off issue will be by Sergio Aragones, a fellow Mad legend who befriended Jaffee in 1962 upon joining the staff. They formed a mutual admiration society — both deeply steeped in the craft of the pantomime cartoon — and were occasional roommates on the Mad staff’s storied annual trips to far-flung vacation spots… 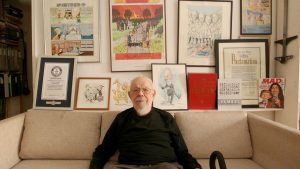 “Peanuts” creator Charles Schulz liked to say that Jaffee could draw anything. But the Mad cartoonist became best known for two staples of the magazine: “Snappy Answers to Stupid Questions” and the Mad Fold-In, a format that Jaffee said was a humorous twist on the photo fold-outs then popularized in newsmagazines and Playboy.

The Mad Fold-In consists of a single image and question; when the page is folded inward, the condensed image and wording reveal a “hidden” answer that satirizes politics, pop culture and social trends. Jaffee appreciated the opportunity to be such a free-range humorist, satirizing whatever he found funny.

Rarely missing an issue, Jaffee created nearly 500 Fold-In pages. A typical example appeared in the summer of 1972, when the magazine, at its cultural zenith, was reaching millions of monthly readers. During that era’s national conversation over conservation, the Fold-In question asked, “What beloved American animal will never become extinct because of overwhelming support?”; the answer and picture: “Mickey Mouse.”

Peers marvel at the consistent satiric sharpness of Jaffee, who has received the National Cartoonists Society’s Reuben Award and was inducted into the Will Eisner Hall of Fame. “The most remarkable thing about him is he has been doing it at the highest of levels for over seven decades,” Richmond said. “That is more than remarkable — it is literally without comparison.”

Even more on the storied career of Jaffee here.

Here’s a look at the MAD Magazine tribute issue. 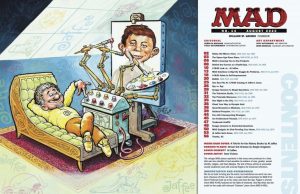 On behalf the IP and Comics Nexus teams, we salute Jaffee on a memorable and influential career.