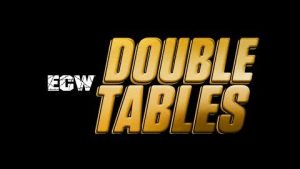 Joey Styles welcomes fans to the ECW Arena in Philadelphia, Pennsylvania. According to thehistoryofwwe.com, the show drew 1,000 fans.

Styles interviews Jason, who hypes the Pitbulls as the next ECW tag team champions. The crowd chants that Jason is wearing a “K-Mart suit” before he introduces Jason the Terrible from Japan’s W*ING promotion.

Opening Contest: The Pitbulls & Jason the Terrible (w/Jason) defeat the Young Dragons & Hack Myers when the Terrible pins Myers after the Pitbulls double flapjack him onto his opponent at 8:01:

The Young Dragons were a jobber team dressed in karate gear and used to be Paul Lauria and Mikey Whipwreck under masks. That is not the case here as one of the team is accidentally unmasked in the middle of the match and it is not Lauria or Whipwreck. According to Dave Meltzer, one of the Dragons was jobber Don E. Allen, although he is not the unmasked wrestler. Jason the Terrible was a hardcore brawler who wore an old hockey mask like the horror film character. The gimmick was first used in Stampede Wrestling by Karl Moffat and was then used by other wrestlers in Puerto Rico and Japan. In this case it is Roberto Rodriguez. Myers gets color after some Jason headbutts, with Styles noting that the Dragons are doing nothing to help the three-on-one beating Myers is taking. Jason does not sell Myers offense and the Pitbulls double flapjack their partner on top of the Shah of ECW to win. For a squash, this went on far too long.

After the match, Jason gloats in a promo about how good his team did. As this goes on, Myers beats up the Dragons, drives off the Pitbulls with a chair, and destroys Jason in the ring. This brings “the Virgin Princess” Angel to the ring in a wedding dress and she slaps Myers. That leads to her getting punched in the face and spanked, with Angel liking that and kissing Myers. Unimpressed, Myers gives her a piledriver.

Dreamer was trained by Johnny Rodz and took on the last name Dreamer as a tribute to Dusty Rhodes. He came to ECW in 1993 and a feud with the Sandman transitioned him from a pretty boy character that fans hated to someone they came to respect. Taken alone, the match is average, but it is a great lesson in interacting with the fans. For example, Dreamer wears the t-shirt of an online wrestling group that attends the show and Richards takes it off him halfway through the match to irritate them. Then, when they brawl around ringside fans hand Dreamer chairs and a frying pan to pummel his adversary. After stoically watching most of the match at ringside, Raven enters the ring to hold Dreamer in place for a Richards superkick. However, when Richards tries the move again, Dreamer ducks, goes low, and secures the pin. Rating: **

After the bell, Raven takes off his jacket, but Richards and the referee keep him at bay. As he walks away, Dreamer says Raven should go back to the WWF and leads the crowd in an ECW chant.

This was a rematch from the January 7 ECW Arena show where Lauria beat Whipwreck with Jason’s help. They waste no time getting started, with Lauria trying to attack Whipwreck during his entrance. Whipwreck just sends Lauria into the crowd, and the crowd tosses Lauria back toward the ring. Whipwreck cruises along until he misses a pescado, allowing Jason and Lauria to pummel him on the floor. Whipwreck rallies with a sloppy super-duper bulldog, only to have Jason break up the fall by pulling Whipwreck out of the ring. So Whipwreck decks Jason and after bridging out of a cover, he uses a backslide to even the series between these two at one each. One of the issues of the matches between these two is that they wanted to do a lot of high-flying spots or complicated reversals but went too fast and things started to fall apart. Despite that, they did keep the crowd engaged so that counts for something. Rating: *½

Ian Rotten beats Axl Rotten with a Flair pin at 6:41:

It takes just a minute for Ian to have color as he and Axl brawl into the crowd and he becomes a bloody mess within five minutes as Axl keeps pounding away on the cut. Then the battle goes into the corner, where Ian trips his brother and earns a fluke victory. Ian’s blood was the lone highlight and warrants a small piece of a star on the ratings scale. Rating: ¼*

Afterward, Axl maintains his attack and the two brawl to the locker room.

One of the great things about this era of ECW was the diversity of in-ring styles, showcased here as we go from a hardcore brawl in the previous match to a more technical encounter. Snow puts Benoit on his heels early by slingshotting into the ring from the apron and dropkicking Benoit in the back. However, a missile dropkick misses, and the story of the match turns into Snow not giving up as Benoit scores near-falls from two German suplexes, side suplex, flying headbutt, and powerbomb. He avoids a dragon suplex and delivers a Snowplex to turn the tide and double KOs follow with an exchange of German suplexes. The end comes when Snow goes to whip Benoit into the ropes and Benoit counters that into the dragon suplex. This was a great piece of technical wrestling, hurt only by the fact that Snow was a newcomer and did not have much of a following, so Benoit winning was predictable. Snow would not return to ECW until 1997, leaving for Smoky Mountain Wrestling shortly after this event. Rating: ****

To get himself over as a dastardly heel, Benoit powerbombs Snow after the match and poses for the camera as a medical team floods into the ring and puts Snow on a stretcher.

ECW Championship Match: Shane Douglas (Champion) (1-0) defeats Tully Blanchard after shifting his weight on a suplex into the ring at 9:24:

For all the talk about Blanchard defending the Four Horsemen’s honor, one would think he would get some sort of elaborate entrance. Instead, he just enters the ring right after Douglas with no theme music. Having failed to make the battle between these two an epic sixty-minute draw the previous month, ECW books this as a brawl. It is a tame one, though, as exciting spots are separated by long periods of resting or inaction. For example, Blanchard puts Douglas through a ringside table but cannot follow up. And it does not help that Blanchard appears gassed four minutes in. After getting whipped into the guardrails on the floor – with rest periods between those spots – Douglas shifts his weight when Blanchard tries to suplex him into the ring and that retains the title. These two did not have chemistry together. Rating: *

According to arena reports, after the finish, Dean Malenko and Chris Benoit came to the ring and the Triple Threat posed. Blanchard then returned and tossed Douglas over the top rope.

Although 1995 has not been kind of the Sandman he still has his good theme music and gets to beat down his opponents after he loses, so he is still over. The rules for the match require the wrestler to earn a decision over their opponent and then their opponent has a ten count to get up and continue. Fans do not appear to understand the stipulation as they are confused why the match keeps going after Cactus scores an early pin. Cactus does his share of offense while the Sandman is out of it, a consequence of suffering a legit concussion after Cactus leg drops a chair onto his face. This being 1995, though, the Sandman still takes lots of weapons shots to the head after that, making for cringe worthy viewing in modern times. The battle eventually goes to the floor, where the Sandman keeps getting up after a Cactus Elbow and bunch of double arm DDTs on the concrete. There is no drama during all this either as Cactus covers, the Sandman quickly gets up, Cactus hits another move, and its rinse and repeat. Based on the Sandman’s concussion, it seems like the Cactus Elbow with the chair might have been meant to finish but the Sandman did not know to stay down. Rating: *

Paul Lauria comes to the ring and says that he is the real giant in professional wrestling. He insults 911, who comes out and chokeslams Lauria three times.

Tables Match for the ECW Tag Team Championship: Sabu & the Tazmaniac (w/Paul E. Dangerously) (0-1) defeat the Public Enemy (Champions) (1-0) when Sabu puts Rocco Rock through a table to win the titles at 9:46:

Mindless brawling occupies the combatants until the tables come out after five minutes. Sabu unfolds a chair on the top rope and tries to put Johnny Grunge through a table, but Grunge moves and Sabu’s knee crashes onto the table’s edge. Shortly thereafter Grunge and the Tazmaniac fall through a table as they jokey for position on the second rope, so the match comes down to Sabu and Rock. Rock puts Sabu through the table with the Drive-By, but Dangerously distracts the referee so it does not count. As Grunge chokes Dangerously out, the Tazmaniac puts Rock on a table on the arena floor and Sabu leaps off the top with a leg drop to give he and the Tazmaniac the titles. It takes a moment for the crowd to realize in the chaos what just happened, but when it is announced that Sabu and the Tazmaniac have won the titles they get a big pop. Rating: **

After the match, the Enemy are driven off and 911 and Sabu set up tables in the ring. Rock is put on a table in the ring while Sabu scales one on the top rope so he can do an Arabian facebuster. However, Chris Benoit scales the top rope, attacks Sabu, and superbombs him through the table that Rock is placed on in an awesome spot.

The Last Word: The main event of this show was requested a lot on the tape trading circuit in the 1990s and it acquired a somewhat mythical quality. Viewing it today, though, the match is simply average and there have been better tables matches done by major promotions. Chris Benoit was the MVP of this show, putting on a match of the year candidate with Al Snow in the middle of the event and then doing a memorable spot to end the show. It is little wonder why the WWF and WCW became interested in his services during 1995. Overall, while show may not have had a match crack ** except for one time, the thing to remember is that ECW fans appreciated genuine effort even if the in-ring product was poor. Good effort oozed through this show, which is one reason this event is still cherished by older ECW fans.

Up Next: ECW Hardcore TV for February 7!

Logan Scisco has been writing wrestling reviews for Inside Pulse since 2005. He considers himself a pro wrestling traditionalist and reviews content from the 1980s-early 2000s. Most of his recaps center on wrestling television shows prior to 2001. His work is featured on his website (www.wrestlewatch.com) and he has written three books, available on Amazon.com.