Doctor Who is back in the stores with the second season of Jodie Whittaker playing the Timelord. This time around features 10 episodes that bring back the Daleks, Cybermen and The Master. Even better is when the Doctor has to come between Nikola Tesla and Thomas Edison. Now everything is out on DVD and Blu-ray from BBC Studios. Here’s the press release so you can know what’s in the boxset before you zip out to buy Doctor Who: Season 12: 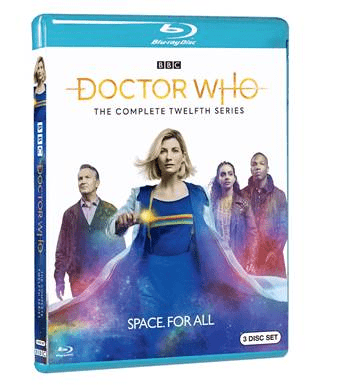 Doctor Who Season 12
Available Today on Blu-ray and DVD

Featuring terrifying monsters old and new, figures from Earth’s history, and an eclectic set of guest stars including Stephen Fry (The Hitchhiker’s Guide to the Galaxy, A Bit of Fry and Laurie), Sir Lenny Henry CBE (Broadchurch, Harry Potter and the Prisoner of Azkaban), Goran Višnjić (ER, Timeless), Sacha Dhawan (Marvel’s Iron Fist, An Adventure in Space and Time), and Robert Glenister (Paranoid, Law and Order: UK), this season delves deeper into the hearts of the Thirteenth Doctor.

Cinematic visuals, compelling characters, and a host of alien threats all collide in Season 12 with Doctor Who’s trademark warmth, humor, and heart.