Ginseng Roots #4 – I think that Craig Thompson’s autobiographical series about the ginseng industry in Wisconsin is fascinating.  Thompson takes us to meet a farmer he and his brothers used to work for as children, picking rocks, and then introduces us to the two friends who they got into the same job.  Along the way, we learn a great deal about ginseng, the changing face of American labour (and the unwillingness of Americans to do it), poverty, and the oddness of growing up in a fundamentalist family (young Craig thinks his teacher is lying when he teaches about geologic history that contradicts the Bible.  Through the whole thing is Thompson and his brother’s love of comics.  I feel like a less talented storyteller would go for the easy elegy, but while Thompson is clearly nostalgic for the way things were, he’s not overly sentimental.  This is a great read.

Daredevil #20 – Chip Zdarsky’s Daredevil has been excellent, and it really feels like it’s coming together now, as DD faces off against a small army of supervillains, knowing that help isn’t coming.  Although, he does get help from two characters you wouldn’t expect it from, leading to more taut moments.  Zdarsky and artist Marco Checchetto knock this one out of the park. 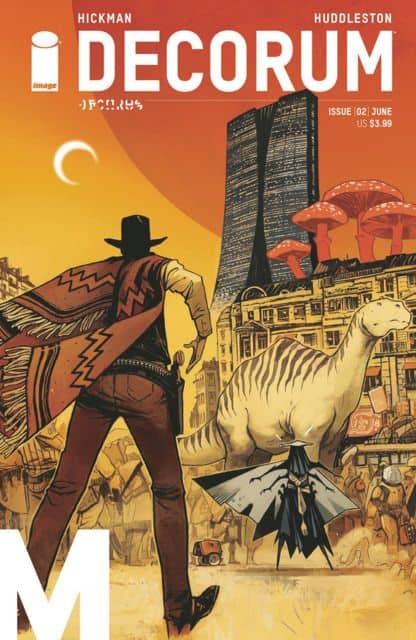 Decorum #2 – I didn’t really understand everything that went on in the first issue of this new series by Jonathan Hickman and Mike Huddleston.  Then comics took a break for months, and this issue came out, and I was completely lost.  This series feels like a successor to East of West, with its multiple storylines and layers of complexity, but I don’t feel like Hickman is doing as good a job of introducing all these layers and concepts.  It’s pretty though, and I think that maybe if I read these two issues again before the next one comes out, I’ll have a better sense of things.

Die! Die! Die! #10 – In the letters column, Robert Kirkman admits that his insane action and political satire series is not as strange as what’s happening in the real world.  And this is in an issue where the cabal that Connie runs figures out how to implant fetuses in men’s genitalia as a way of fully funding abortion.  The main characters discover that Barnaby is free, and prepare to hunt him down.  This book is a lot of fun; I’ve missed it.

Excellence #7 – I’m so happy to see Excellence back on the stands.  Six months have passed since the last issue (I think that’s accurate, actually), and Spencer has moved forward in his plans against the Aegis, the body that controls the use of music in the world, and, in Spencer’s eyes, is hopelessly corrupt.  He starts to make his moves here, and immediately comes up against some expected opposition.  What I can’t tell is if Spencer’s natural arrogance is leading him to trouble, or if this is all part of his plan.  Brandon Thomas and Khary Randolph are on fire with this title. 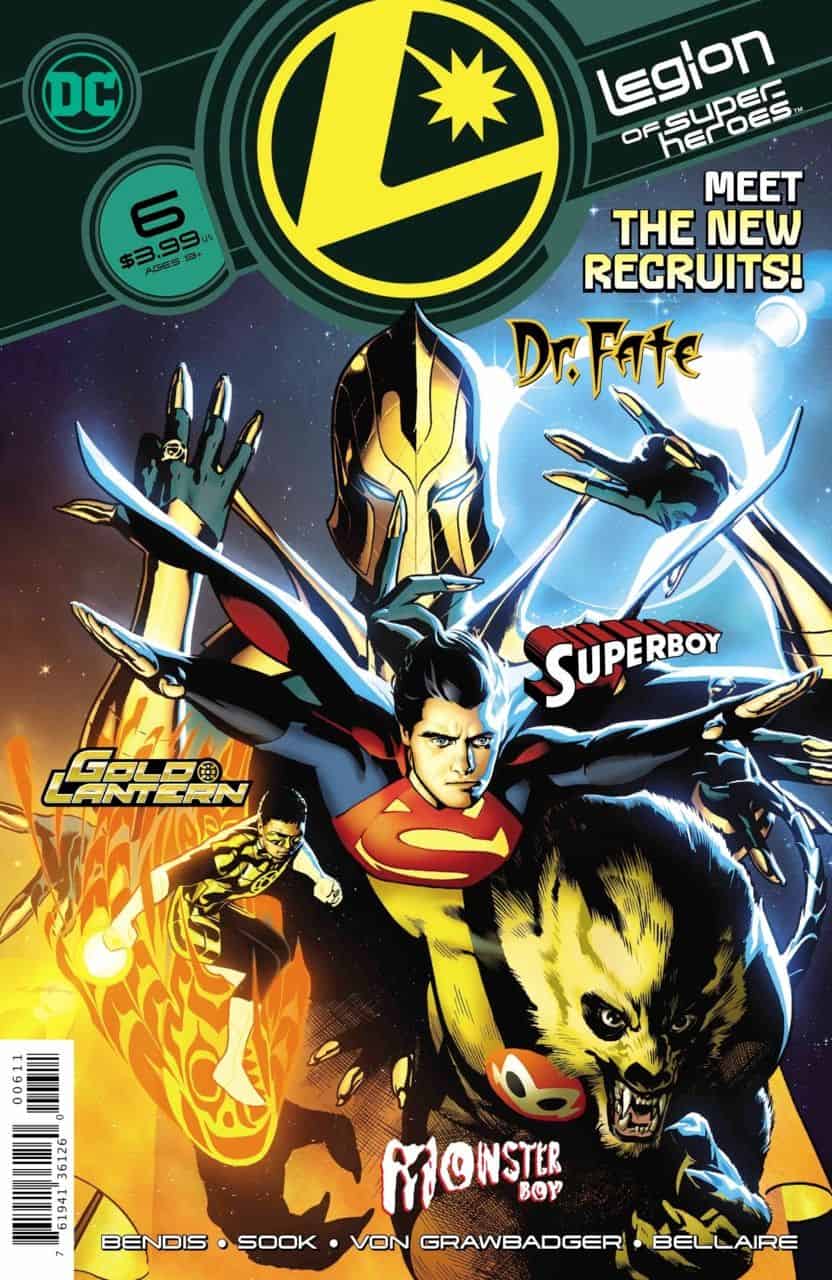 Legion of Super-Heroes #6 – Brian Michael Bendis continues to make some strange choices in his telling of this story.  The entire Legion goes into action when the Horraz attack Earth, using Aquaman’s trident.  I liked the large-scale action scenes, handled wonderfully by Ryan Sook, and the fact that we got introduced to a few more new characters, but if I’m to consider this the last issue in the first trade, the conclusion feels very rushed (nothing new to people who have been following Bendis’s career).  We don’t see how the battle ends, only its outcome, which is strange.  I also find it odd that this issue shines some focus on Gold Lantern and Monster Boy, two new characters who have mostly been shown in the background before now.  With such a storied past and deep stable of characters for a Legion comic, I’m not sure why we need so many new characters to fill background space.  Still, Bendis’s Legion has kept my interest, and is better than I had hoped it would be, so I’m going to stick with it.

Miles Morales: Spider-Man #17 – I don’t think the first issue of Outlawed, the new teen version of Civil War, has come out yet, but we get a tie-in issue here.  Luckily, Saladin Ahmed structures this story in such a way that reading that book isn’t necessary.  Miles bonds with a kid getting picked on for his clothes, then gets into it with CRADLE, the militarized law enforcement group that is going around trying to arrest teen heroes.  First off, this group is being run by Dum Dum Duggan, who I thought was dead or an LMD, or something.  Secondly, and I know that this book is supposed to have come out a while ago, and was finished months ago, but seeing these mostly white paramilitary types trying to beat up Miles, a black teen hero, is a bad look right now.  The scene hit a little different, but of course he manages to get away.  Ahmed has been the right writer for Miles; his scenes of Miles and his family always feel authentic.  I’m happy to see this book back, and am pleased with the art by Carmen Carnero.  This was a nice read.

New Mutants #10 – It’s interesting to see MLFer Wildside working with the New Mutants, but beyond that, this story, revolving around a mutant in Carnelia, a country hostile to mutants, is feeling a little stretched out.  I hope the next issue features the end of the arc.

No One’s Rose #2 – I’m really feeling this science fiction series by Zac Thompson, Emily Horn, and Alberto Alburquerque.  All that’s left of humanity lives in a giant biodome, with a strict class system.  A pair of siblings from the lower levels see things differently – Tenn wants to climb the ranks of the hierarchy through her excellent scientific work, while her brother Seren wants to tear it all down, and is trying to join the underground that his father helped inspire.  The siblings snuck into the higher level last issue, to watch a parade (and for Seren to deliver something to someone), but they weren’t expecting a terrorist attack by the Drasil.  In this issue the siblings split up, and it leads to one getting what they always wanted, and the other getting the exact opposite.  I like how the sibling rivalry informs our understanding of this world, and like the creativity that’s gone into building this world.  It’s a good series.

Undiscovered Country #6 – I find this series hard to buy into, because the pure insanity of the world that Charles Soule and Scott Snyder have built in the walled-off America makes it impossible to believe.  When I leave that aside (which is tough), I can get into the strong characters.  This is the end of the first arc, and it’s a nice long issue at no extra price.  The crew moves towards the wall to the next section of America, while the Destiny Man chases them.  It’s chaotic, but fun.  Just don’t try to make sense of much of it.

Undone by Blood or The Shadow of a Wanted Man #3 – Zac Thompson and Lonnie Nadler have had some missteps lately, but with this series, they are back near the top of my list of writers to watch.  The young girl trying to find her family’s murderer continues her investigation around the town of Sweetheart, which means she gets knocked around some more, while in the Western novel she’s reading, the retired gunslinger gets closer to recovering his son.  Both stories hold my interest a great deal, even after the pause, and I am enjoying Sami Kivelä’s art a lot.  I still get a big David Lapham vibe off this book, which helps endear it to me. 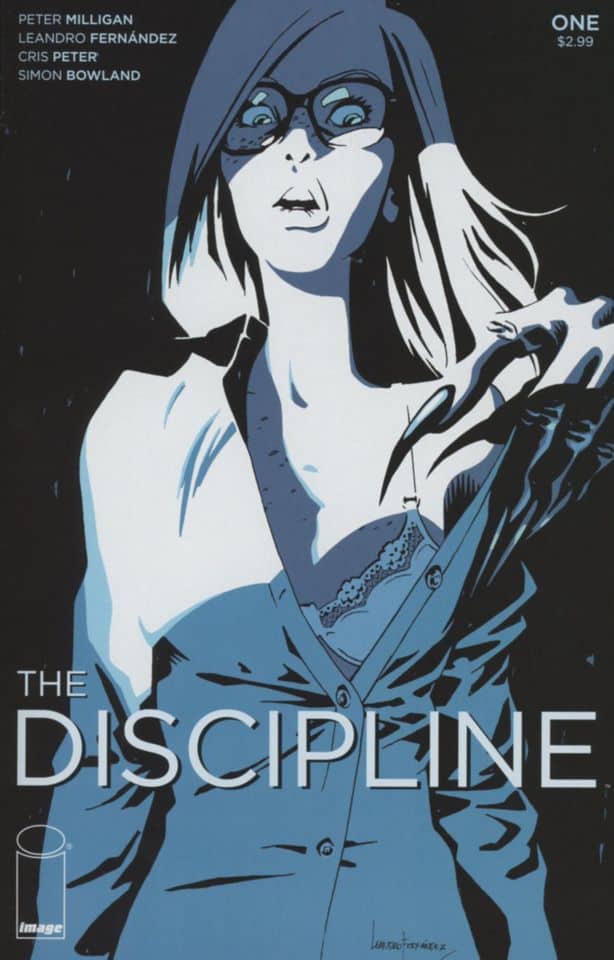 Something is Killing the Children Vol. 1

The Discipline #1-6 – It’s a shame that this Image series, that really feels more like a mid-00s Vertigo book that lost its home, only lasted for six issues, because it was just starting to get its footing when it ended.  The Discipline is an ancient order that has been in a long battle with The Stalkers.  A young woman is recruited, using some dirty sex magic, and struggles to figure out her identity within the world of The Discipline.  Peter Milligan crafts an interesting story, and Leandro Fernández draws the hell out of it.  I guess it just didn’t catch on though, as the second arc never materialized. 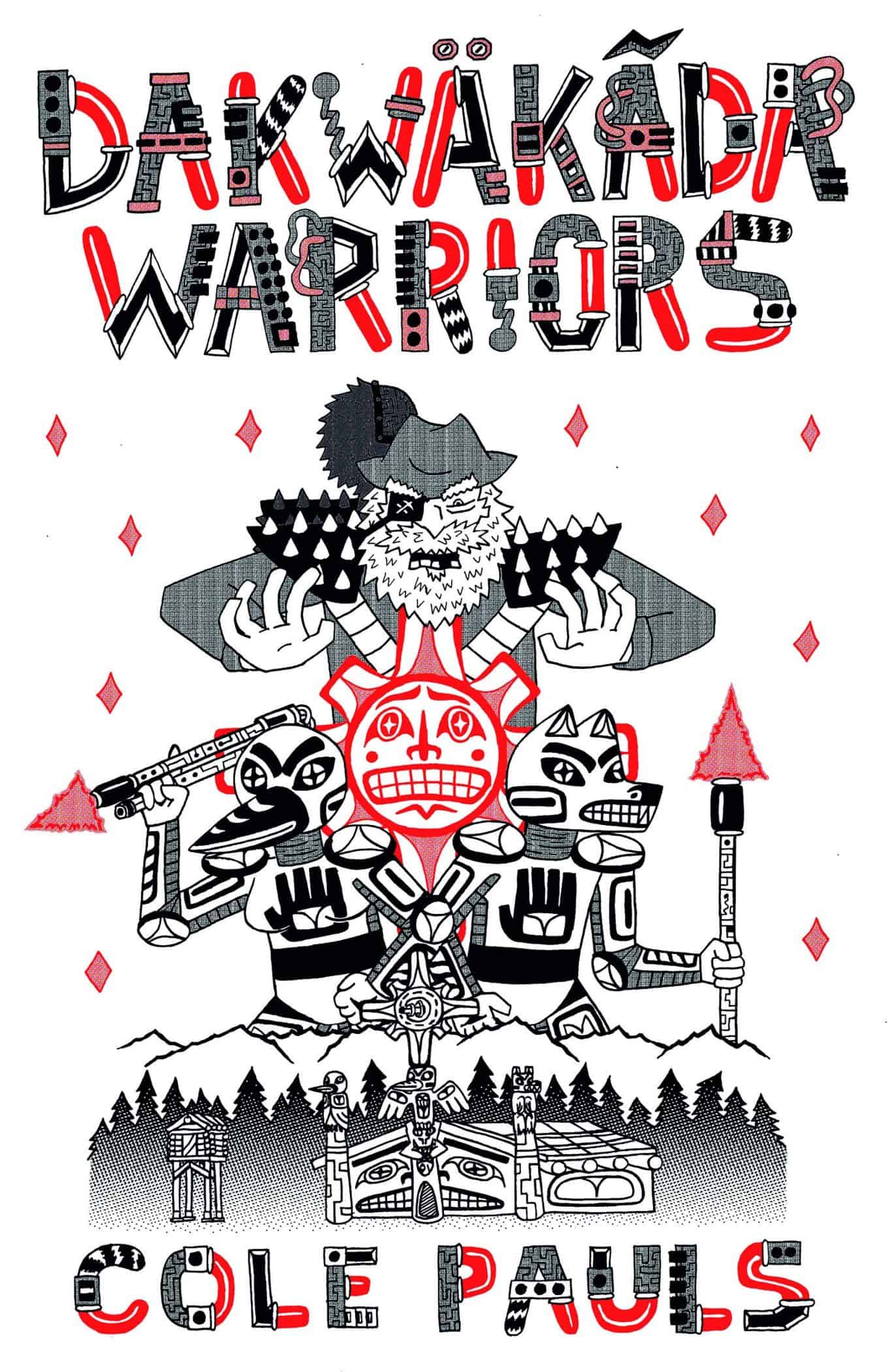 Dakwäkãda Warriors – I was curious to check out this book, by Yukon cartoonist Cole Pauls.  It envisions a world where indigenous heroes, the Dakwäkãda Warriors Ts’ürk’i and Ägay are charged with protecting the Nän, or Earth.  They have two foes, Cyber Nàa’i (a cyborg Sasquatch) and Space Kwädāy Dän.  While our heroes fly around space in their own spaceships, the villains fly in a cosmic dredger.  Pauls has integrated his culture as a member of the Tahltan First Nation into a science fiction/superhero setting, and has given us the first bilingual comic from that part of the world.  The heroes gather allies to face their foes, and one of them undergoes a change of heart after some reflection on how the other has impacted his culture.  This book has some commentary around assimilation, but it’s not terribly deep.  Pauls’s art is lovely, and it’s cool to see the way he’s applied indigenous sensibilities to this book, but I would have loved more depth to the story and characters as well.  Still, it’s incredibly cool that a book like this has been published, and I hope that many kids and adults work through the translation guides to learn a bit about a different culture (and most importantly, that the kids of Haines Junction Yukon come away with a massive sense of pride in their own culture and heritage).

Ryan Porter – Live at New Morning, Paris – I’m a huge fan of jazz musician Kamasi Washington and the coterie of musicians he’s spent his life playing with.  Ryan Porter records and tours with Washington, as well as releasing his own albums with the same crew.  This live album, built around Porter’s trombone, features Kamasi Washington on sax, Tony Austin on drums, Miles Mosley on bass, and Brandon Coleman on keys.  One of the last live shows I got to see before the corona-fueled ending of live music was this very group in Buffalo, and listening to this album takes me right back there.  These guys are innovative and skilled, and are doing so much for jazz at the moment.  Listening to this was really nice.

HooksArthur – What You Know May… – I’m not sure how I came to “discover” this upstate New York rapper, but I’m glad I did.  I’ve always been a sucker for piano heavy hip hop beats, and I really like HookArthur’s flow.  This is a strong album.

Night Stone – Night Stone – So much of the music I listen to comes from Minneapolis that it’s given me a strong affinity for the city, and a lot of knowledge about its scene.  Night Stone is a side project by Lazerbeak (from Doomtree and various other projects) and ICETEP, that explores house beats.  This album features vocals from some incredible Minneapolis voices – Lady Midnight (a rising star), Sophia Eris (likewise), and Channy Leaneagh (from Poliça), and is lovely.  It’s always cool to see Lazerbeak moving in new directions and trying new things.