James Fulton continues to be Comics Nexus’ iron man. This milestone column celebrates over 10.5 years of this weekly column that debuted on December 12, 2009. Wow. Many relationships last less. Wishing James another 10.5 years and more worth of columns to come.

Tartarus #3 – I found Tartarus to be one of the best new series to debut prior to the lockdown, and am so happy to get a new issue.  Tilde and Klinzu find themselve separated once they get to Tartarus.  Tilde is hunting a way to get to her grandmother’s planet, so she can learn the truth of her parentage, while Klinzu is looking for the woman his dating app has set him up with, despite the ridiculous amount of danger that surrounds him.  What they don’t realize is that other people are searching for them, and Tilde gets another big surprise.  Johnnie Christmas keeps this story moving nicely, and Jack T. Cole’s art is incredible.  There’s a lot to absorb in this series, and it’s all good.

Family Tree #6 – Jeff Lemire and Phil Hester return for the second arc of this series, and while I’d hoped that it would be set in the post-apocalyptic world the last issue hinted at, it instead focuses on Judd, the grandpa we thought had been killed off before.  We get a better glimpse of the people who are chasing Meg, but don’t really learn any more about why people are turning into trees.  This is a good series, and it feels like it’s not missing any beats as it launches into this new arc. 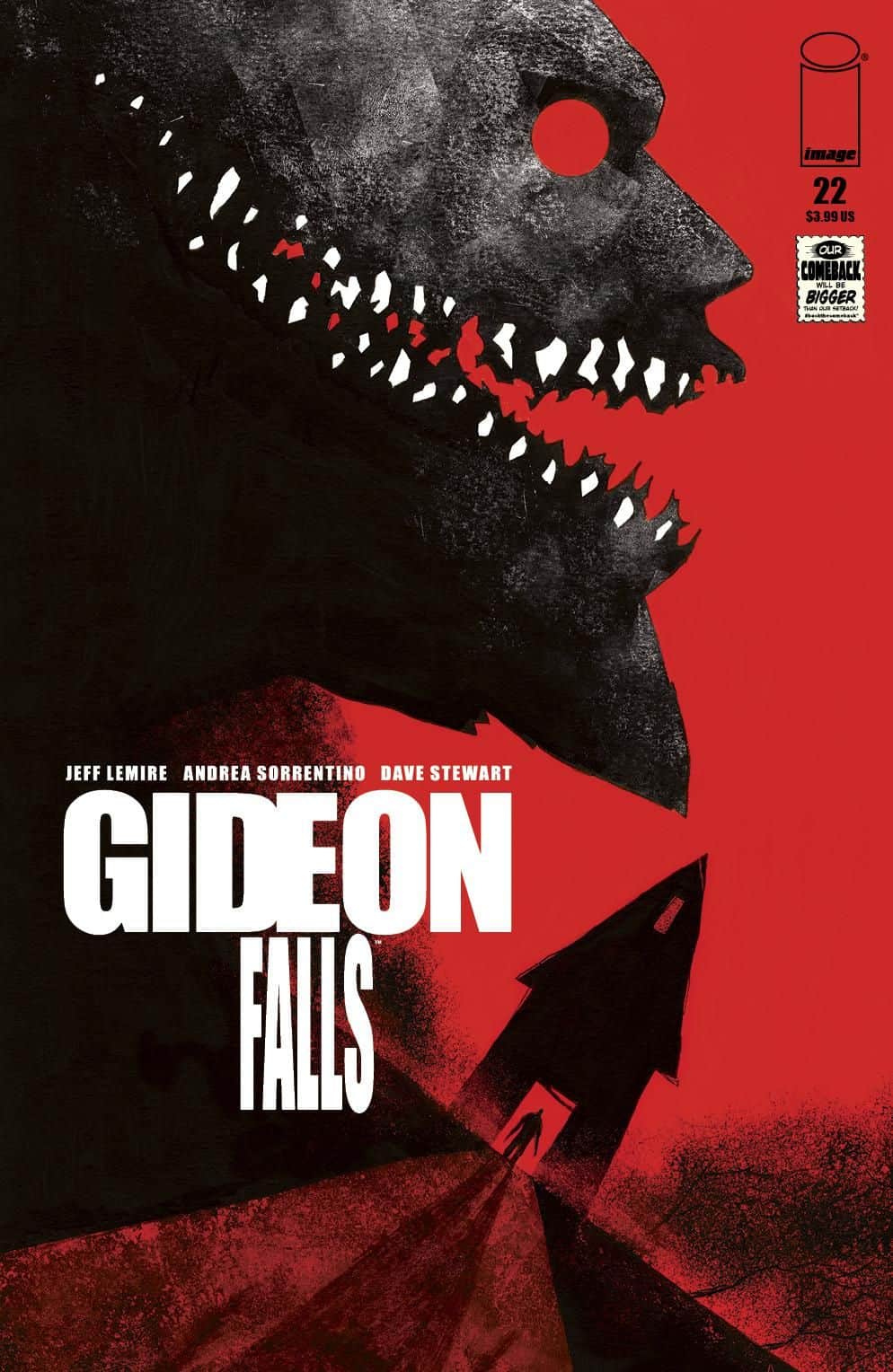 Gideon Falls #22 – Jeff Lemire and Andrea Sorrentino launch the newest arc of Gideon Falls (it’s that kind of week for Lemire, apparently), and the usual cast of the book is separated across different parallel universes, none of which look that pleasant.  One thing that crossed my mind, while reading this, is that Norton’s, and now Angela’s, wearing of surgical masks was originally used to give the characters a sense of separation from the world around them, but now kind of suggest that they are just more cautious and intelligent than everyone around them.  I like this title, largely because of Sorrentino’s art and inventive layouts, but I do kind of feel like it’s stretching on a little too long; I hope this arc contains a lot of forward movement.

Strange Adventures #2 – Unexpectedly, this issue is more about Michael Holt, Mister Terrific, than it is about Adam Strange.  Batman wants Holt to investigate Strange, and learn if he is really responsible for war crimes on Rann, as some have suggested.  Holt has a strange methodology, which apparently involves a massive amount of random facts.  His scenes are cut up by scenes from Rann, as Strange has to cross a desert to try to save his daughter and his wife.  This issue didn’t grab me with the same force that Tom King and Mitch Gerads’s other work, from Sheriff of Babylon to Mister Miracle, has, but I can see that King is still laying the foundation for this story, and I’m definitely intrigued by it.

Wonder Woman: Dead Earth #3 – I am still really enjoying Daniel Warren Johnson’s story about Wonder Woman set in a ruined future, but as it becomes more involved in what caused things to go so bad for the planet, I find I’m not as riveted as I once was.  Johnson shows us just how involved Diana was in the Earth’s ruin, and what happens to Superman in this issue.  It’s good, but it lacks the frenetic energy of the first issue.

All Time Comics: Crime Destroyer #1 – I picked up this one-off a while ago because I was curious in Fantagraphic’s attempt to put out an homage to 70s superhero comics.  This issue was inked by Benjamin Marra, whose whole deal is this kind of thing, but I didn’t know he was inking over Herb Trimpe, which was kind of a treat.  The problem with homage comics is they lack the history and interconnectedness of the series from that time, so this kind of reads as a parody too.

Thomas Alsop #1-8 – This 2014 Boom! series blew me away, and I wish I’d read it sooner.  The series can be easily described as “John Constantine is the reality TV star hereditary protector of the island of Manhattan,” but there’s so much more to this book than that.  Alsop, who inherited the role of Hand of the Island from his father, has a contentious relationship with everyone around him, and a worse one with alcohol.  He’s arrogant, irreverent, and appears to be milking his position for fame and personal gain, although it doesn’t make him happy.  He discovers that ten years after 9/11, all the spirits of the people who died when the Twin Towers fell are still there, and that he is the only one who can free him.  This becomes connected to the original sin that has been poisoning Manhattan for ages, involving a slave ship that was used as landfill, and ended up under the Towers.  Chris Miskiewicz, the writer of the series, has a strong knowledge of Manhattan’s history, and I like the way he weaves together threads that include the island’s original inhabitants, slavery, gentrification, and CBGB’s.  There are so many things that unfold slowly in this series that I found each chapter exciting, and that I was constantly re-evaluating my opinion of Alsop.  Palle Schmidt, the artist, keeps things a little abstract and scratchy (I got a bit of a Ben Templesmith vibe at times).  I don’t know how easy it would be to find this book, but I encourage people to check it out.  It was really good.

This week, forty albums were selected for this year’s Polaris Prize longlist.  The Polaris Prize is the most prestigious music award given in Canada, as chosen by a jury of people in and around the music industry.  The longlist (which can be found here) shines an equal sized light on big acts and smaller ones, and I always come away with a few new discoveries.  Three artists I discovered this week are:

Among the nominees were a pair of recent favourite albums of mine.  If I was on the jury, I don’t know that I could pick between these two, but I expect one or the other will win in the fall.