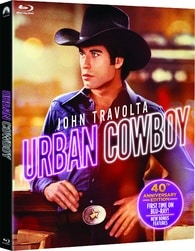 URBAN COWBOY is definitely of its time. It walks, moves, and feels like it should: a Texas-set romance defined by a location and its music. John Travolta was riding a wave of success with SATURDAY NIGHT FEVER and GREASE, yet when he signed on to star in a city western it was to rebound after the poor reception he received from his last project (MOMENT BY MOMENT). Now to properly describe this now 40-year-old drama, I’d call it a triangle romance with a mechanical bull at the center.

We have Bud (Travolta) and Sissy (Debra Winger) who meet one night at Gilley’s, a honky-tonk nightclub that once boasted having a dance floor where thousands could do the Texas Two-Step. Their romance quickly gravitates to marriage and moving into a mobile home together. Bud is a country boy still learning the ropes of the big city life and working at an oil refinery. Then Wes (Scott Glenn) enters the picture, openly flirting with Sissy at the club. A prisoner on parole, Wes works at Gilley’s operating its new mechanical bull attraction. Bud becomes obsessed by that damn bull, and Sissy starts spending more time around Wes while Bud’s at work.

Neither man is a prince in this equation, as Sissy becomes a rag doll, knocked around and victim of ridicule. The amount of toxic masculinity shown by Bud and Wes wouldn’t likely fly in today’s Hollywood. In all honesty, they are the worst aspects about URBAN COWBOY. A close second might be Wes showing off his ripped physique in a see-through mesh shirt that likely took up space in Cher’s closet.

The reason to watch is to see Gilley’s nightclub in its heyday (it would burn down a decade after the film’s release). The club scenes have a cowboy-and-western glitz that gets amplified by a great soundtrack featuring Bob Segar, the Eagles, Bonnie Raitt, the Charlie Daniels Band, and three original country music chart-toppers (including Johnny Lee’s “Lookin’ for Love”).

And if you ever become engaged in conversation and DIRTY DANCING is brought up, you can impress others by acknowledging that Patrick Swayze’s mother, Patsy, made her debut as a motion picture choreographer with URBAN COWBOY.

Making its high-def debut from Paramount Pictures, the Blu-ray is highlighted by a retrospective featurette with Mickey Gilley, deleted scenes, outtakes of John Travolta and Debra Winger on the dance floor, and both actors rehearsing on the mechanical bull. The release also comes with a digital code and a slipcover that matches the Blu-ray’s cover art (which airbrushes out the beer that John Travolta holds in the original theatrical poster).

What took them so long? That’s a question John Hughes’ fans have asked for years about PRETTY IN PINK’s absence on Blu-ray. While the format has been around since 2006, curiously this teenage romance with Jon Cryer and Andrew McCarthy vying for Molly Ringwald’s love and affection has never been released until now. Back when high-definition releases were hitting the market, Paramount Pictures was repackaging popular movies on DVD as special editions with subtitles that tied to the movie (“Bueller…Bueller…” Edition for FERRIS BUELLER’S DAY OFF; the “Whatever” Edition for CLUELESS). PINK also had one that was called the “Everything’s Duckie” Edition.

Arriving as part of Paramount’s “Paramount Presents” line of titles on Blu-ray – not unlike Shout! Factory’s “Shout Select” series or the more prestigious Criterion Collection – PRETTY IN PINK was part of the ‘80s teenage movie zeitgeist and arrived at the height of John Hughes’ career. He was writing so much that this comedy along with SOME KIND OF WONDERFUL were directed by Howard Deutch. A tangled romance with a sews-her-own-clothes heroine, a childhood sweetheart, and a rich kid (who would turn a mannequin into Kim Cattrell a year later), PRETTY IN PINK hits the mark between the teenage drama of THE BREAKFAST CLUB and FERRIS BUELLER’S seize the day perspective.

Andie Walsh’s (Molly Ringwald) social status is a disaster. Raised by a single father (Harry Dean Stanton) after mom split, her working-class background doesn’t scream popularity. Andie’s self esteem doesn’t get better when around best friend “Duckie” (Jon Cryer), a social outcast who has been keeping his love for her secret. Then there’s trying to avoid the advances of elitist snob Steff McKee (James Spader in primo ‘80s d*ckhead mode), while also secretly pining away for Blane McDonaugh (Andrew McCarthy), the cute preppie. With prom approaching, she’s caught between unrequited love and crushing on a guy that’s not in her class. Will Andie and Blaine click or will their cliques get in the way?

PRETTY IN PINK doesn’t move the AM/FM radio dial when it comes to the rich boy, poor girl romance, but this is still classic Hughes. Molly Ringwald is as authentic as she was as a distraught sixteen-year-old on her birthday, and her interactions with her father give weight to a story that in another person’s hands would have left the father in the background. (But when you have Harry Dean Stanton you better damn well use him!) After being an absolute scene-stealer as Janine in GHOSTBUSTERS, Annie Potts once again fleeces the screen as Andie’s manager at TRAX, a new wave record store. Plus, the soundtrack is a packed new wave freight train that will leave your ears humming with OMD’s “If You Leave,” The Psychedelic Furs with “Pretty in Pink,” and tracks from New Order, Echo & the Bunnymen, and The Smiths.

The Blu-ray includes a new retrospective from Howard Detuch, a look back at the original ending (“The Lost Dance”), plus we get the original theatrical trailer, and an isolated music score. As with other titles that comprise the “Paramount Presents” line we get some unique packaging that retains the theatrical artwork as part of a gateway foldout slipcover.

Fans of FUTURAMA likely know the meme where Fry is shown with a wad of cash and the words “Take My Money!” That was me when I first saw the announcement that Vinegar Syndrome was going to be releasing 1986’s RAD on Blu-ray. The announcement came the eve of my 39th birthday, and faster than Butch retrieving his gold watch in PULP FICTION I placed an order.

Normally, I’m not one to put in a pre-order like that. There was a time, yes, I was all about pre-orders and checking out the latest new releases each Tuesday; but bills and responsibilities have cut first-week purchases. Then again, not all those purchases were as rad as RAD. An indelible part of my childhood thanks to airings on HBO, this Hal Needham box office casualty got revived thanks to VHS rentals and the growth of BMX. And I was hooked from its opening montage of BMX tricks and John Farnham’s “Break the Ice,” one of three original tracks he supplied the movie.

Cru Jones (Bill Allen) is a teen whose only direction in life is wherever his bike’s two wheels will take him. His mom (Talia Shire) wants him to take the SAT and get into college. But Cru has other ideas when the “Helltrack” comes to town. Further distracting him from studying for the test is BMX rider Christian (Lori Loughlin), one of the sport’s few female attractions, whom Cru quickly becomes fond of after crashing and burning when asking one of popular girls to the high school dance. She wanted to be taken to the dance in car, not on a bike.

If Cru wants to make it to the next level of BMX he has to beat the current champ, Bart Taylor (1984 Olympic gymnastics champion Bart Conner), while wrestling with the duplicitous Duke Best (Jack Weston), the president of the Federation of American Bicyclists, who tries his best to keep Cru from competing and the chance to play spoiler.

RAD is a simple underdog story about a paperboy with a dream. Cru and the Helltrack race are not unlike Daniel LaRusso competing in the All-Valley Karate Championships in THE KARATE KID, though Sam Bernard’s and Geoffrey Edwards’ script fails to have any sage teaching moments like how waxing a car or painting a fence will help in evading getting punched or kicked. Plus, Cru cheats quite a bit in the time trials to get to final round.

No, you watch RAD purely for its entertainment. Hal Needham knew cars (having performed thousands of stunts before directing SMOKEY AND THE BANDIT), but nothing about bikes. Still, he shoots the hell of the biking sequences, including Cru and Christian wowing onlookers at the school dance as they “bicycle boogie” to Real Life’s “Send Me an Angel.” And that’s not even the goofiest moment. That honor goes to Cru introducing Christian to “ass sliding” into an unseasonal cold river – made cheesier with Farnham’s love theme “With You.”

The climax at Helltrack has loads of exciting tricks and stunt work on display, helping to capture BMX in its purest form. RAD may have been a mistimed release in promoting the sport, but the movie is a great time capsule of ‘80s pop entertainment. It’s corny but it has such a fun energy that if you were a kid of the VHS era there was only one way to describe it after it was over.

“The Stuntman Directs” is a 16-minute interview excerpt from a forthcoming RAD documentary with the late stuntman-turned-director Hal Needham. He originally dismissed doing the movie until he saw the riders in action and thought of a way to bring greater attention to BMX racing: HELLTRACK. Great reflections about the construction of the track and finding a way to dry the course after a major rainstorm. Needham also details the bicycle dance and fondly admits that he’ll be known for two classics: SMOKEY AND THE BANDIT and RAD.

“Writing Something Rad” has co-writer Sam Bernard reflect on his relationship with BANDIT producer Robert Levy, discovering BMX, and working on a screenplay. Bernard also divulges why it has taken this long to get RAD released on Blu-ray.

“Rad 25” takes us to the 25th anniversary event in Cochrane, Alberta, Canada in 2011. The event includes highlights from autograph sessions, replica bikes from the film, BMX races, BMX stunts, and interviews with Bill Allen and Eddie Fiola.

Cast & Crew Interviews gives us 25 minutes worth with riders Aparijo, Fiola, and Moser, Bart Conner, and Sam Bernard. Memories of interacting with Needham on set, embracing the movie’s cult legacy, where stunt rider Jeremy Moser started a fan website that has continued to grow in popularity. Also amusing is Bart Conner being more recognized for RAD than winning gold at the 1984 summer Olympics.

Sifting through the archives, we have a vintage featurette on making the movie, EPK-style interviews with Bart Conner, Lori Loughlin, Hal Needham, and Bill Allen, a “Break the Ice” music video.

A photo gallery and a theatrical trailer cap off an impressive set of special features.

For this Vinegar Syndrome exclusive release, the Blu-ray/4K UHD combo comes with a 3D Lenticular (front) and Holographic (back) slipcover designed by Earl Kess. He’s also responsible for the double-sided foldout poster found in the keepcase with the lenticular cover image on one side and an illustration of Helltrack on the back.