It with great sorrow that we must announce the passing of Joltin’ Joe Sinnott on June 25th at 8:40am at the age of 93. He went peacefully with the knowledge that his family, friends, and fans adored him. He enjoyed life and was drawing up until the end. He always loved hearing from all of you and having your comments read to him. Each and every one of you were special to him.

The Sinnott family requests their privacy and understanding during this difficult time. Please send condolences to:

Thank you again for being such loyal and dedicated fans and friends to Joe. He considered all fans friends, and seeing you at cons and reading your messages was what kept him young at heart. 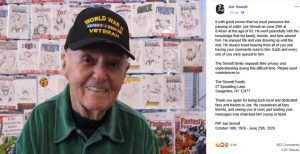 The ‘Fantastic Four’ and ‘Avengers’ artists helped define the look of Marvel Comics in the 1960s. 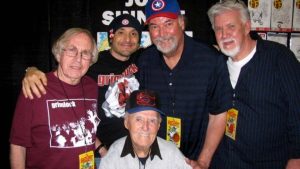 Joe Sinnott, the comic book inker best known for his work with Jack Kirby on The Fantastic Four in the 1960s — a run that defined Marvel’s visual aesthetic for decades to come — died Thursday morning at 93.

“He went peacefully with the knowledge that his family, friends, and fans adored him,” Sinnott’s family wrote on his Facebook account. “He enjoyed life and was drawing up until the end. He always loved hearing from all of you and having your comments read to him. Each and every one of you were special to him.”

One of seven children, Sinnott was born in Saugerties, New York in 1926. He began work as an illustrator in 1950 after a short period in the Navy, followed by three years working in his father’s cement manufacturing business. 1950 was a big year for Sinnott on the whole; that summer, he married Betty Kirlauski, with the two staying together until her death in 2006.

Sinnott was known for his inking work at Marvel Entertainment, an association started in 1951 when the company was known as Atlas Comics; after a period as penciller and inker on titles including Journey Into Mystery, Two Gun Western, Battlefield and Young Folk, he worked freelance for a number of other publishers before returning to Marvel in 1965 as the inker on the publisher’s then-flagship title, The Fantastic Four, working with plotter and penciller Jack Kirby.

The Kirby/Sinnott collaboration remains one of the most highly regarded in American comics, with Sinnott’s smooth, stylized ink work bringing a new sheen and consistency to Kirby’s increasing dynamism, as well as softening Kirby’s facial work to bring a new beauty to his characters. The two would also collaborate on Captain America, The Inhumans and 1978’s graphic novel The Silver Surfer.

Following Kirby’s departure to DC in 1970, Sinnott remained at Marvel working with a variety of artists — including George Perez, Jim Steranko and John Buscema. He had celebrated stints on titles including both The Avengers and The West Coast Avengers, as well as The Mighty Thor, The Defenders and more. His inking style was distinctive and, for an entire generation of fans, recognizably “Marvel.”

Sinnott officially retired from comic book work in 1992, although he continued to work on the Amazing Spider-Man newspaper strip until March 2019, as well as private commissions for collectors. He was inducted int the Will Eisner Hall of Fame in 2013, and named as the special ambassador for the Inkwell Awards in 2008, the same year in which he was inducted into that awards’ Hall of Fame.

On Thursday, former Marvel editor in chief Roy Thomas shared a remembrance of his former colleague with The Hollywood Reporter:

“It was with great sorrow when I learned that Joe Sinnott had passed away. His death wasn’t entirely unexpected, given his age and the fragile recent state of his health, but it’s still a loss. Joe was, of course, THE best inker ever of Jack Kirby’s (or probably anybody else’s) FANTASTIC FOUR, and he made a lot of other artists look better than they were. As a penciler, he probably did his best work before coming to work for Marvel again in the 1960s… yet he made his mark at Silver Age Marvel the instant he inked FF #5.

“After that, the comic always lacked something until he returned to it. I didn’t know Joe well–I worked at Marvel for several years before I met him, because he went a decade or so without coming in to the offices. But I was pleased that, in recent years, he treated me like an old buddy… I think because we were in contact so much, for so many years, if only indirectly because he inked so many comics that I wrote… even on issue of CONAN THE BARBARIAN. In the past few years, when he would come to the Carolinas to spend some time with family, he would always find an excuse to call me up, and we’d talk… mostly about the figures in comics that we both knew. Oh, and we’d argue about which was better as a pop singer: Bing Crosby (his choice) or Frank Sinatra (mine). It was always tricky for me, because while I’m firmly in the Sinatra camp, Crosby was clearly not only a pop great but had paved the way for Sinatra and others. It was no problem for Joe, though… with him, it was Der Bingle all the way, and I admired the way that he kept up that loyalty over the decades. That was Joe. If he liked you, he liked you. Rest in peace, Joe… you made your mark, and you were a great guy besides!”

On behalf the Comics Nexus team, I offer our condolences to the family, friends and fellow fans of Joltin Joe Sinnott.