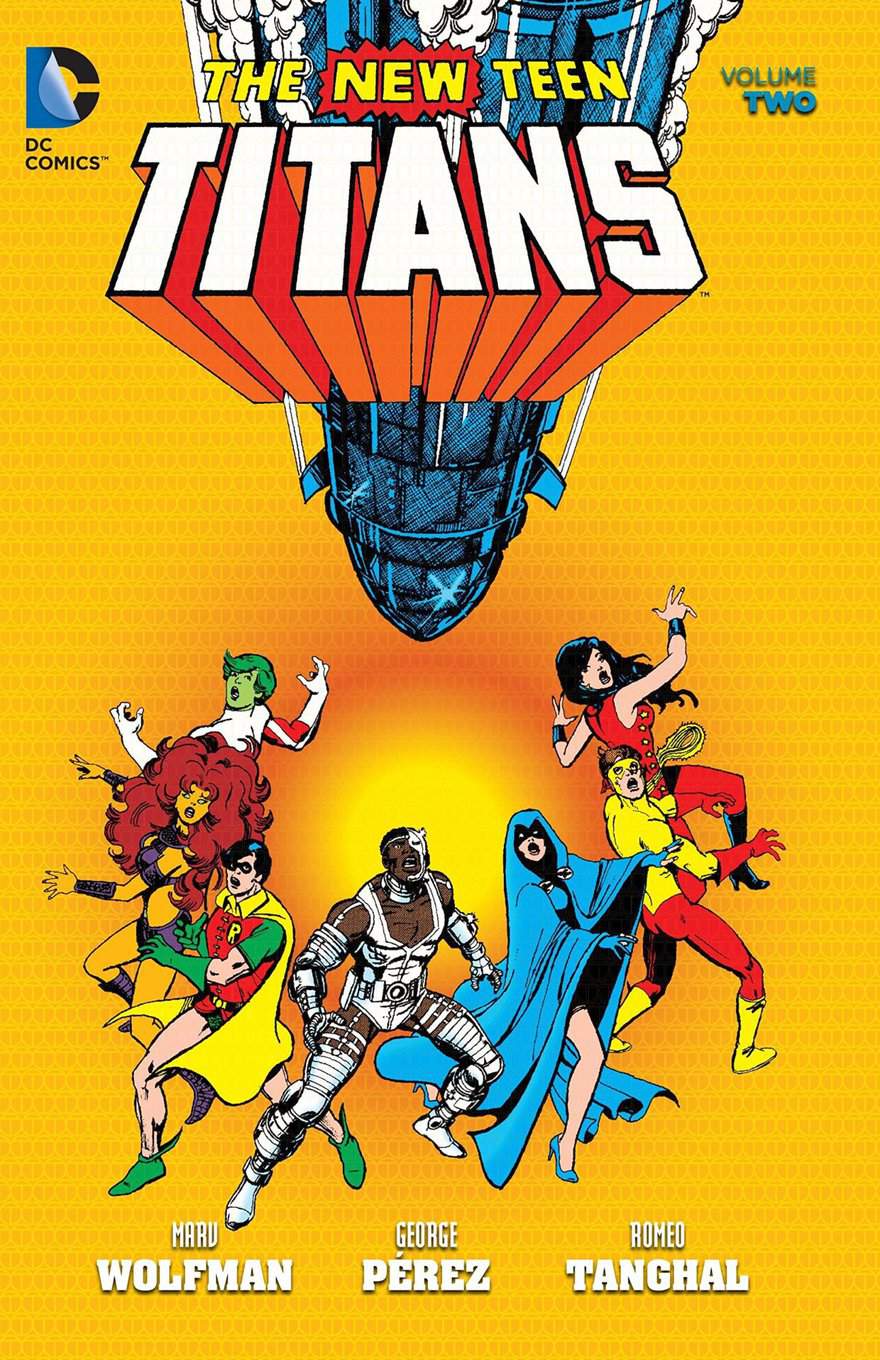 Spoilers from thirty-eight to thirty-nine years ago

I found the first trade in this series, collecting the classic Wolfman/Pérez run of New Teen Titans to be a bit of a rough go, but a) decades of comics fans can’t be completely wrong, and b) my ‘to-read’ stack is mostly NTT trades at the moment, and stores still aren’t open enough for me to pick up more on the cheap.  So, I’m going to push on, secure in the knowledge that it gets better!

I mean, the last issue of the first trade ends introducing a plotline about puppets that kill people.  How could that possibly be terrible?  Actually…

Okay, this trade was better than the first one, but I still found it to be frequently tedious.  The characters were portrayed as being more likeable, and the fact that individual characters got more focus (specifically, Donna, Gar, and Kory) felt necessary, and I appreciated that Raven was largely side-lined.

It felt, in this trade, like Marv Wolfman was working to solve some continuity issues, giving a lot of time to the Doom Patrol and their death.  I was also surprised at how much time was given to the Greek gods and Titans, in a story that only tangentially involved three of the Teen Titans.  (This is a good place to point out just how weird pre-Crisis Wonder Woman was, with Themyscira being home to purple rays, mounted kangaroos, and a curse that men can’t touch the ground).

Wolfman’s prose wasn’t quite as clunky as it was in the first trade, although Raven still manages to bore me every time she opens her mouth, and Gar’s jokes have not aged any better than his sexism.

One thing I am still struggling with is the motivation behind both The HIVE and Deathstroke.  Their reasons for expending so much energy to kill the Titans feels weak in both cases.  Deathstroke had the chance to kill them, but decided to leave it for an atomic bomb to do?  That doesn’t make a lot of sense, and definitely doesn’t work with later portrayals of Slade Wilson.  HIVE is just a poor man’s Hydra, with no real ideological purpose.  Their name, Hierarchy of International Vengeance and Elimination, suggests that they would probably be better at killing people, and maybe wouldn’t always need to hire people…

I was amused by the Brotherhood of Evil, mostly because my first real exposure to Brain and Monsieur Mallah came in Grant Morrison’s classic Doom Patrol, and I find myself reading into their interactions, looking for clues of their love for one another.  The rest of the Brotherhood are very lame.  Phobia and Warp do keep popping up these days, but they’ve always sucked.  Plasmus is not a memorable character, and while Houngan’s blending of religious practice and electronics had potential, the character is so wrapped in stereotypes that he probably couldn’t be used today.

What was emerging throughout this volume was an increased sense of these characters forming a family, and I appreciate that, and found that it gave me reason to keep reading.  I think this is the strength of the comic, and I’m starting to see why it caught on so well.  I expect that continues to develop in future volumes.

Let’s take a moment to talk about the characters and how they were portrayed.

Wonder Girl – Donna got a lot of development, as we saw her professional career as a photographer (albeit a very young one), and saw her (potentially inappropriate) relationship with the creepy and ten years older than her Terry Long.  I don’t think Wolfman does a good job of selling this relationship – he seems like a dolt, and we only know they are in love because they keep talking about it.  I feel like the Hyperion storyline, where he made Donna fall in love with him, could have been mined for a little more drama, but suspect that Wolfman realized that he’d have to justify why Donna is with Terry, and so left it.  This might be coming from left-field, but was Wolfman maybe portraying a bit of himself in Terry, and this whole thing was a form of fanboy wish fulfillment?

Changeling – Gar is the other character who showed the most growth during this volume.  He had to make a deal with his enemies, and also got to (rather quickly) resolve his rocky relationship with his step-father, Steve Dayton.  I don’t know why Dayton is considered a step, when he adopted Gar and was married to Gar’s adopted mother, but whatever.  It was nice to see Gar become a little more serious, and not be just the joke character.  At the same time, there is probably a lot to say about Gar’s treatment of women in this comic, as he continuously objectifies and sexualizes his teammates and any other woman they come across.  It’s awkward to read now.  Also, it’s odd that he’s the youngest kid on the team, but he’s also the hairiest…

Starfire – Koriand’r also began to show growth in this volume, although a lot of her screen time is given over to the others telling her how to act and use her powers.  I assume this is something that is going to be built on in future volumes.

Cyborg – It’s curious that Vic’s relationship with Sarah Simms is relegated to being “just friends”, and I wonder if that’s because of his fear that she would reject him for being only partially human still, or if it’s because of fears of showing an interracial relationship.  I like how Vic and Gar are becoming better friends in these issues.

Kid Flash – Wally doesn’t do a whole lot in this volume.  He’s one of the characters I feel the strongest affinity for, because I was a fan of his time as the Flash, but I don’t find anything particularly likeable about him here.

Robin – I feel much the same way about Dick here.  He’s around, he does stuff, but as a leader, I don’t find him particularly inspiring.  It often feels like Donna is the team’s real leader.  Other than the hint that he is interested in Kory, he’s just the guy who’s around all the time, and happens to keep a fingerprint-dusting kit in his pocket.

Raven – I still can’t stand Raven.  I’m just glad that there wasn’t as much of a focus on her this time around.

I saw some real growth in George Pérez’s work over the course of this book, and wonder how involved he might have been in the plotting of the story as well.  I feel like the issues set on Themyscira and Olympus were preludes to his run on Wonder Woman.

In the end, I’m glad I stayed with this, and I have bigger hopes for the volumes of this series to come.  I’m also impressed with how much story Wolfman and Pérez fit into each 25-page issue, and wish we could get back to comics of that length and depth again.