Does It Tie Into The Dark Nights: Death Metal Multiverse Reboot? (Sans Spoilers) 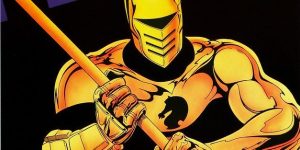 We’ve been following the multiple new release dates for this series here and here.

Well, DC Comics has communicated to retailers that this limited series from writer Brian Michael Bendis and artist Alex Maleev had been “rescheduled to align with upcoming DC Universe storylines“.

This is a different fate than the other Event Leviathan spin-off Manhunters: Secret History which was canceled and not postponed.

That continuity clarifying limited series cancelation does not bode well for…

…including Generation Zero: Gods Among Us, featuring Wally West the Flash with the powers of Doctor Manhattan of the Watchmen and Doomsday Clock.

It appears now that DC Comics’ Dark Nights: Death Metal will reboot the current DC multiverse and IF there are books that reveal this new Earth or new multiverse’s past that such stories would be told after Death Metal concludes in January 2021.

The 2020 version of Checkmate is VERY different from the classic version above. I am nonetheless eagerly awaiting this new limited series. I’ve been a Checkmate fan from its inception.