When Hammer made a distribution deal with Universal Pictures in the early ’60s, the English studio was able to strike a deal with the American studio to remake The Phantom of the Opera. Hammer was able to bring their touches on Gaston Leroux’s novel that had twice already been filmed by Universal. The production had Terence Fisher as director and producer Anthony Hinds also writing the script under his John Elder pen name. The Phantom was played by Herbert Lom before he’d be know as Chief Inspector Dreyfus in the Pink Panther films. Also in the cast is Patrick Troughton before he became the second Doctor Who. Among the cast are Edward de Souza (The Kiss of the Vampire), Michael Gough (Horror of Dracula) and Heather Sears (Sons and Lovers). When the film had previously been released on Blu-ray, Universal had it barebones. Now Scream Factory gives us The Phantom of the Opera: Collector’s Edition with a batch bonus features worthy of breaking out into song. They include the TV version of the film that’s longer because Universal had to fake scenes involving cops investigating to make the movie fit in the 2 hour time slot. There’s biographies of Herbert Lom and Anthony Hinds. Also a documentary about the making of the movie with Edward de Souza and others. Here’s the press release from Scream Factory: 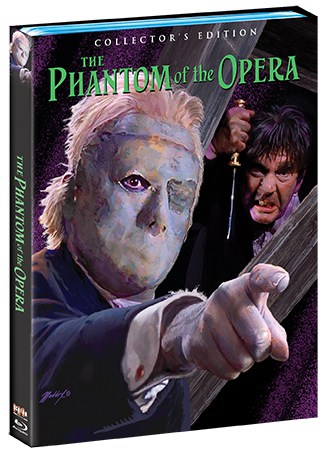 “… [a] haunting thriller in the classic mode.” – Film Daily

The Phantom of the Opera

Herbert Lom stars as “The Phantom” in Hammer Films’ celebrated production of Gaston Leroux’s horror classic. Arriving on Blu-ray August 11, 2020 from Scream Factory, this Collector’s Edition of The Phantom of the Opera is a new 2K scan from the interpositive, with both 1.85:1 and 1.66:1 aspect ratio options available.

The release of this acclaimed film is loaded with bonus features, including new audio commentary with film historians Troy Howarth and Nathaniel Thompson, new featurette The Men Who Made Hammer: Anthony Hinds, new interview Phantom Triumphant: Edwin Astley and Hammer’s Horror Opera – an interview with author David Huckvale, new featurette Herbert Lom: The Soul Behind the Mask – an interview with film historian/screenwriter/novelist C. Courtney Joyner, a new interview with special effects artist Brian Johnson, the featurette “The Making of Phantom Of The Opera” – narrated by Edward De Souza plus interviews with Richard Golen, Alan Lavender and Edward De Souza, the longer TV version of the film, and more! Fans can pre-order their copies now by visiting ShoutFactory.com

Mysterious mishaps bedevil a London opera house, but when tragedy strikes during an opening night performance, it’s clear that these “accidents” are the deliberate work of a deranged madman – The Phantom. When Christine (Heather Sears), the young star of a new musical is contacted by the shadowy specter, her producer investigates, tracking the ghostly Phantom to his secret underground lair. More than an evil apparition, The Phantom proves to be a brilliant composer. Disfigured and nearly destroyed, he now demands his hellish revenge. Christine, his new star, is his one weakness, and he pays the ultimate price to keep his love alive.