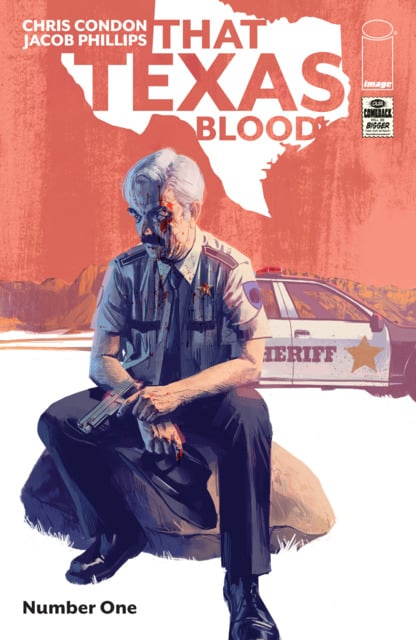 That Texas Blood #1 – Although I’ve never read anything by writer Chris Condon, and mostly know artist Jacob Phillips for his colour work, something about the solicitation for this comic left me intrigued.  Now, this feels like it might be one of the biggest debuts of this year.  Joe is the Sheriff of a forgotten part of West Texas, and when the book opens, it’s his seventieth birthday.  His wife keeps a tight hand on him, insisting that he go pick up a casserole dish she needs to prepare his birthday dinner, but when he goes to visit his friend Ruthy to retrieve it, it’s clear that something is wrong.  This issue introduces us to the county where he lives, and it seems like a remote and desolate place.  I loved the atmosphere of this book (it has a real No Country For Old Men vibe) and am excited to join Condon and Phillips in exploring it.  Phillips’s art definitely reminds me of his father’s (Sean Phillips), but is distinct in its own way.  I love the wide open settings.  This is designed as an ongoing, and I hope it gets a good run. 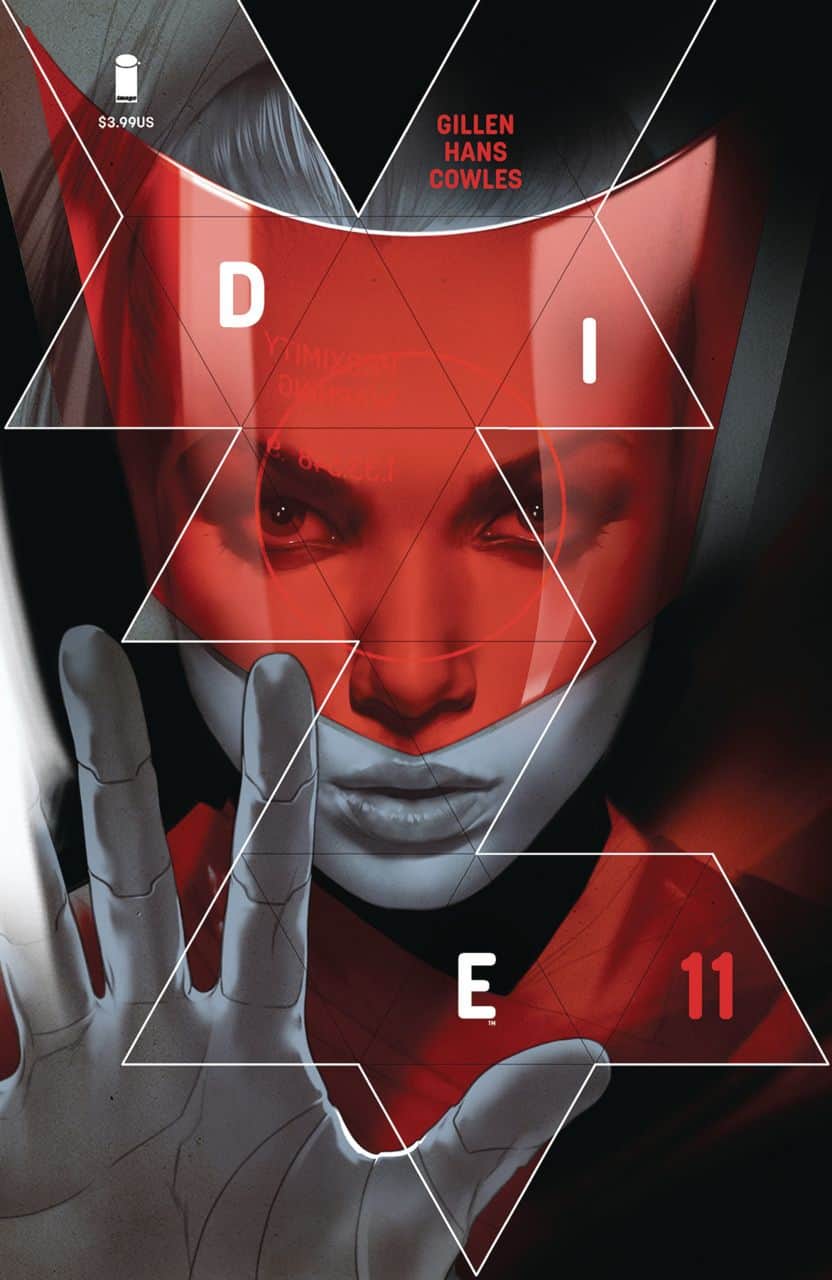 Die #11 – It’s great to return to Kieron Gillen and Stephanie Hans’s Die, just as the party has split in two, and everyone needs to decide what exactly they want to do with their future.  The characters have to all want to return to the real world in order for that to happen, but they all have different agendas and plans that make it hard for them to agree.  We also get another surprise at the end of the issue, as this world becomes increasingly more layered and complex.  This is one of the better recent Image titles, and it does not disappoint.

Empyre: Avengers #0 – I’ve learned time and again to not bother getting my hopes up with Marvel’s big tentpole event comics, but I always end up checking them out anyway.  This time around, I’m most interested in the fact that Al Ewing, a writer who, to me at least, can do no wrong, is one of the showrunners of this event.  He wrote this issue, which has the current Avengers lineup travelling to the Blue Area of the Moon, where they discover that the Cotati have been growing a garden, which somehow has become a big issue for the new alliance of Kree and Skrulls that are following Hulkling’s leadership.  There are some things I don’t understand here, like why the Cotati, of which there only appear to be two, unless all the plants are Cotati, are such a threat to the Kree and Skrulls.  I also don’t understand where the Summers family’s place is in relation to this big jungle (I guess that’s why there’s an X-Men tie-in to Empyre).  I liked the way Ewing wrote the team, but I’m already bored with the notion that the Avengers and the Fantastic Four are going to be on opposite sides of this conflict (I can’t seed the Richardses being down with genocide).  I might try the main event out, and I figure that anything I don’t like about it, I can blame on the other cowriter, Dan Slott, whose involvement leaves me trepidatious. 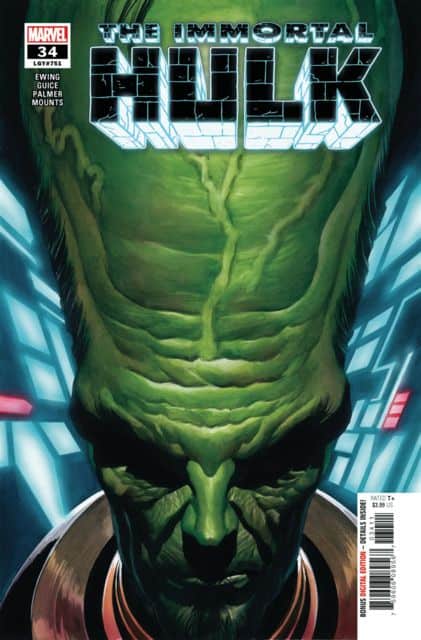 Immortal Hulk #34 – This issue focuses on The Leader, and his many deaths over the years.  I often find these “genius villain” characters difficult to buy, simply because they can’t be all that smart if their plans never work out.  Al Ewing addresses that, and the many times that the Leader has returned to life, in the context of his radically different interpretation of gamma-based characters.  It helps clarify some of the things that have been happening in the series, and helps to set up the next big storyline.  I love that Butch Guice came in as the guest artist for this issue; he remains a life-long favourite artist who doesn’t get enough credit.

Once & Future #8 – I continue to be a little disappointed with this series, as it lacks the depth I’m used to seeing in a Kieron Gillen comic.  Am I missing something?  It’s not terrible, but it also doesn’t require a lot of thought.  In this issue, we learn that there’s a new legendary “story” on the scene, leading to more problems for Duncan and his Nan.

Outer Darkness/Chew #3 – This most bizarre of comic book crossovers comes to a satisfying ending, as the crew of the Charon have to deal with a number of demonically possessed characters from the Chew comic rampage across the ship, and Poyo takes on the ship’s God Engine.  John Layman made this series very enjoyable, helping to build enthusiasm for the upcoming Chu title, while also helping tide me over until Outer Darkness, one of my favourite series, returns.  It was also very cool getting to look at Afu Chan’s take on Rob Guillory’s designs from Chew.

Rogue Planet #2 – I’m enjoying this science fiction horror series by Cullen Bunn and Andy MacDonald.  A crew of scavengers have found themselves on a very strange planet, where they’ve encountered some kind of lifeform.  While their expedition tries to figure out what’s going on, something comes onto their ship and tries to take one of the crew members away with it.  I’m not sure what all is happening yet, but Bunn and MacDonald get the vibe just right.

Sex Criminals #29 – This issue is pretty intense, as Jon decides to take his vengeance on Kuber Badal by breaking every last thing in his mansion.  Everything.  Down to the forks.  You can really feel the frustration in this issue, as the series moves ever closer to its big climax (sorry, couldn’t resist).

S.O.S.: Support Our Shops – This was a nice treat this week.  Aftershock has put out a fair-sized free anthology comic full of love letters to comics shops by a variety of creators whose work I like.  Cullen Bunn, Steve Orlando, Szymon Kudrankski, Phil Hester, Jerry Ordway, Jamie McKelvie, and Zac Thompson are among the people who contributed stories of good customer service, inspiration, belonging, and refuge.  This was a cool thing for Aftershock to do, at a time when things are very precarious for a lot of stores.

Star Wars: Bounty Hunters #3 – I feel like this miniseries, which I was already a little shaky on, has not been served well by the publishing hiatus.  Beilert Valence fights Bossk for much of the issue, not aware that other bounty hunters are also moving against him.  I found Paolo Villanelli’s art a little hard to follow in places.

Thor #5 – Maybe it’s the distance between issues, but I found it hard to get into this issue of Thor.  I think that I’m tired of every new arc being an attempt to top the level of cosmic threat of the last one.  Who is Thor as a character now?  Still, Donny Cates managed to draw me in with the scene between Sif and Beta Ray Bill, and I found the surprise at the end of this issue interesting.  Nic Klein’s art is great too.  I just want to see something new with Thor…

Year Zero #2 – I really like the premise of this book, that shows us the simultaneous stories (okay, I suspect the woman in Antarctica’s story is set ahead of the rest) of five people as a zombie apocalypse takes place.  The street kid in Mexico finds some help from an unexpected source, while the Japanese hitman finds himself on a mission of revenge, the Afghani woman has to take control of the group of women she was trying to save, and the guy in America sits in his bunker feeling lonely.  It’s a cool approach to a story that’s been done to death (and often feels like it’s come back as a zombie itself), and artist Ramon Rosanas does well differentiating these different locations.  Benjamin Percy is really catching my attention more these days. 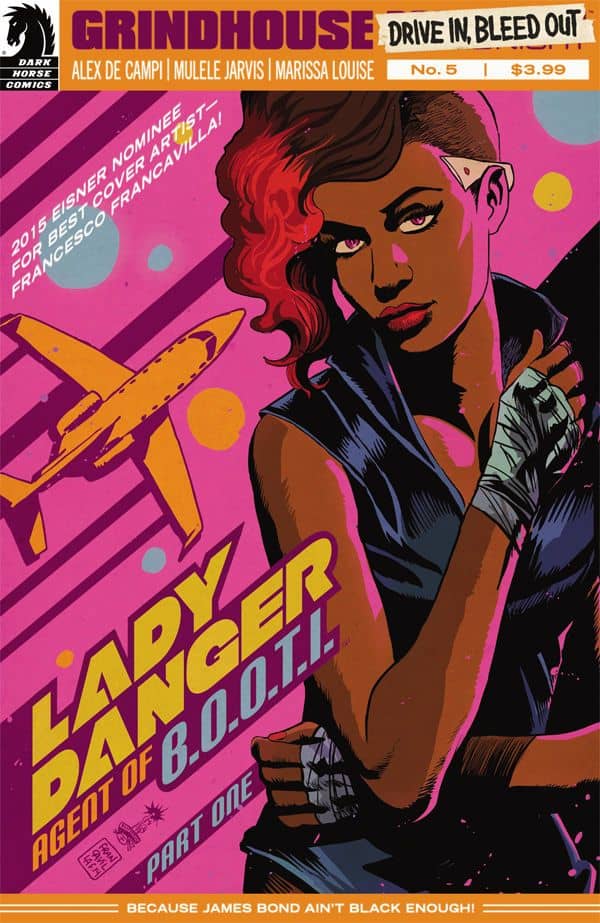 Grindhouse: Drive In, Bleed Out #5&6 – Alex DeCampi is a treasure.  These two issues of her B-movie tribute series from a few years ago focus on Lady Danger, the Agent of BOOTI, a non-violent peace-keeping organization that exists in “the ghetto”.  When a rival organization plots against her, the community comes to her defense, and what starts as a fun take on blaxploitation stories turns to something so politically relevant it could have come out this month.  Sadly, I’m probably never going to find the last two issues of this miniseries, as they were not imported to Canada due to their sexual nature.  I wish there was a lot more DeCampi being published (where is her Panel Syndicate book – the first issue came out a couple of months ago now).

Lucifer #13 – I haven’t read any Lucifer comics since Mike Carey’s run ended, but a while ago I noticed that this issue had art by Marco Rudy, so I had to pick it up (and then wait a few years to read it).  There are two short stories in this issue, and the second one was drawn by Ben Templesmith.  Generally, if all of this series was drawn (or painted) by these two, I’d have been all over it.

Pencil Head #1-5 – I’ve been a fan of Ted McKeever for decades now, but I’ve found that I haven’t much enjoyed his more recent Image miniseries like Meta 4, Miniature Jesus, and The Superannuated Man.  Pencil Head is a different kind of thing though, as it’s an autobiographical comic detailing his time working for Marvel (Epic, really), and then going to DC.  He uses jokey aliases for the various editors and creators he met and worked with.  Some are obvious, but a few stumped me.  We learn about an artist who used to steal original art from the Marvel offices, and about a terrible dinner with Frank Miller that changed the way McKeever read his work forever.  We also get to see how difficult it was for a truly unique artist to try to fit into the corporate comics world, although there’s also an admission that his best work came during those years.  I think this was intended as McKeever’s goodbye to comics; I know he hasn’t published anything since this came out.  If you’ve never read Metropol, it’s worth checking out.  If you like comics world gossip, you should read this.

Shaft #1-6 – I’ll admit that I’ve never seen Shaft, the movie, but when I picked these up a while ago, writer David Walker was making his name at Marvel comics, and I was curious to see what he’d do with this iconic character.  Walker, and artist Bilquis Evely, steer clear of the usual Blaxploitation tropes, instead showing us Shaft’s first foray into the world of being a detective, when someone kills the girl he’s dating while looking for a friend of hers.  Shaft gets involved, and finds that people he’s had issues with are also involved.  It’s a good story, and Evely’s art is lovely and well-suited to the period.

Ras G – Raw Fruit Vol. 5&6 – Last year we lost Ras G, a legend in the LA beat scene.  This collection of music represents some of his last work, and helps showcase his unique approach to Afro-futurist electronica.  Ras is always going to be missed…

Mansur Brown – Shiroi – I somehow missed this album when it came out, but was very happy to discover it.  Mansur Brown left fingerprints all over the modern classic that is the Yussef Kamaal album ‘Black Focus’, and he continues to explore their sound with his guitar.  It’s a very nice album.

Avantdale Bowling Club – Self-titled – This was another late pass for me.  This hiphop group from New Zealand raps over fantastic jazz music, and fills a hole I didn’t know I had in my life.