Retro Review: Legends Of The Legion #1-4 By Kitson, Peyer, Nauck, Moy & Others For DC Comics 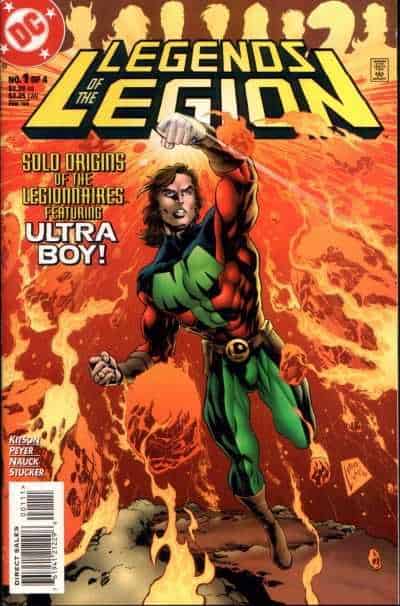 Spoilers (from twenty-two years ago)

At the end of the 1990s, DC decided to create a set of miniseries featuring or connected to the Legion of Super-Heroes (and Legionnaires).  They started with Inferno, which was discussed previously, and then turned to Legends of the Legion, a four-issue Legion-only version of Secret Origins.  The issues focused on Ultra Boy, Spark (who didn’t have a ‘solo origin’, as the cover claimed), Umbra, and Star Boy.

I don’t know how the characters were chosen for this.  I also don’t really remember these comics.  I know that I was becoming less and less enamored with the reboot Legion by this point, but I still bought all of these.  I guess we’ll find out if there’s a reason why I don’t remember them…

I don’t have a lot to say about this miniseries.  It just kind of got floated out there, and I’m not really sure why.  I don’t think there was a large clamoring for information on any of these characters, although an origin series makes more sense than the very random Inferno miniseries that preceded this, and the Science Police series that came after it.

Let’s talk about these characters a bit.

I feel that an opportunity was missed here to maybe dig into some of the other characters of the series that didn’t get much airplay.  We know very little about Monstress (although I’m fine with that), or Gates.  Had I been in charge of this title, Invisible Kid would have gotten an issue that explored his prior experience working in Earthgov intelligence (as a fifteen year old super scientist).  I doubt he would have fit the framework of the series, as he couldn’t exactly tell these stories to a bunch of school kids, but it would have been pretty interesting.  I feel like he was one of the most underexposed characters in the reboot Legion, which is weird given he was the team leader at the time.

I thought it was nice that the kids that the Legionnaires explained their stories to were meant to appear as tributes or nods to the Legion of Substitute-Heroes from the classic continuity, but it’s weird that the one I had trouble identifying originally is meant to represent Night Girl, who has already appeared in the reboot era.  The Legion has a long and rich history, and in the reboot era, very little was done to create it again.

I found it interesting that Barry Kitson, long-time artist of the LEGION series and many other DC books was tapped to plot out these issues.  I wonder if this was in some ways meant to be a try-out for future writing projects for him.

Nothing about the interior art on this series stands out (aside from Nauck’s stubby characters).  I was excited to see that classic Legion artist Steve Lightle was providing the covers, but they definitely lacked the clear and effective designs of his earlier work.

In all, this is a bit of a placeholder series, and as such, it’s fine.  Soon, we’ll look at the Legion: Secret Police series that came out after it (that finally put an end to this concept of rotating Legion-themed miniseries).

I am so certain this series has never been collected, that I didn’t even look.

BBC & Disney Plus Team-Up For More Seasons Of Doctor Who!