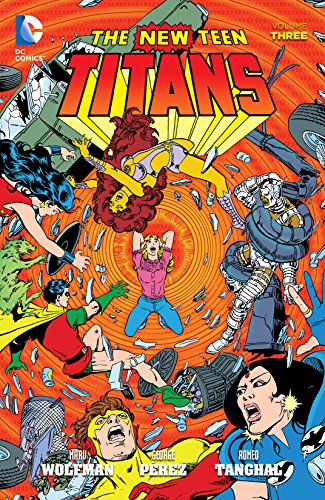 Spoilers from thirty-eight years ago

The second trade of these classic comics was a lot better than the first, leaving me with hope that this series would continue to improve, and that I’d eventually figure out the massive appeal of the title.  It must have been gaining ground rapidly, as in 1982 there was a four issue miniseries, Tales of the New Teen Titans that focused on solo adventures and origin stories of some of the team.  That was still pretty unheard of in those days.  It’s also surprising that George Pérez managed to draw both comics.

So, let’s see how things continue to improve…

So now I’m three trades deep into The New Teen Titans, and feel like things are still improving, but I also found this trade to be a total grab-bag, including only four issues of the regular series, and four issues of the Tales miniseries that was designed to help explore the new characters in the book, and to round things out, Changeling too.

These issues suffered from all being done-in-one stories.  Wally’s friend developed weird poltergeist-like powers that were out of her control.  It got dealt with.  A Russian sent a plague to the US, and a former acquaintance of the Titans clashed with them while he tried to fix it.  Doctor Light tried to steal some statues, and ended up bringing them to life.  A villain with a massive power set that is never fully explained (is it him, or his suit?) tries to kill the Titans so his father will love him, and join HIVE.  With the exception of the ongoing issues with HIVE, all of these threats are dealt with very quickly, and don’t have any lasting consequences on the team, making this trade a placeholder at best.

The origin stories did allow a lot more space for character development, if not growth, as we began to learn more about some of the newer or more mysterious Titans.  It’s worth talking about most of the characters individually.

Kid Flash – Wally has received very little screen time in this series so far, so it was interesting to see him be the focus of most of the regular issues in this trade.  We see Wally’s desire to help his old friend Frances Kane, but also get a clear idea of just how conservative he is when the Russian Starfire comes to town.  He even calls out his peers for their more liberal views, which is interesting.  It’s curious that it’s almost immediately after that story that he also becomes aware of just how privileged he is, comparing The Disruptor’s family to his own.  Wally has been a favourite character of mine since the time when he became The Flash, but the way writers like Mike Baron, Bill Messner-Loebs, and of course Mark Waid portrayed him doesn’t fit with the way Wolfman is writing him here.  I guess Wally really did grow up more than most.

Cyborg – Vic is becoming a strange mix of contradictions.  He’s described as being a genius as a child, but it’s not clear if he still retains that intellect.  He isn’t often shown, to this point, as being particularly smart, when according to this, he’s probably the smartest person on the team (Robin might have something to say about that though).  At the same time, he lost his scholarship to college because of poor grades, but it’s not clear if that’s because he missed months while recovering from his accident (and becoming Cyborg), or if it’s because he legitimately messed up his coursework.  It’s also curious that Vic, as a star athlete, has never really had friends before joining the Titans.  I wonder if we are going to learn anything more about the guy who tried to have the United Nations building blown up.  It is nice to see that Vic is losing his anger, and I hope to see him continue to grow as a character.

Raven – Yeah, the issue that shared her childhood story did nothing to make me like her more.  I’ll admit that I didn’t read it very closely, as my eyes were glazing over, but am I to understand that Raven’s soul-self didn’t manifest until she was with Trigon, and that he did something to make it evil?  Are we ever going to learn why her speech bubbles look different from everyone else’s?

Changeling – Gar’s misogyny is getting harder and harder to deal with.  It’s clearly stated that he’s only sixteen years old, yet he’s lived in Hollywood by himself and been in long-term relationships?  There are a lot of contradictions where Gar is concerned.  I can live with that, but I really hate his dialogue and his little hornball act.  More than anything else, it’s Gar’s character that shows how dated this comic is now.

Starfire – Kory started this trade still grieving her dead lover from Volume 2, but by the end of it, she seems to have moved on with life.  Her origin issue gives us a lot more details about her childhood rivalry with her sister (who I think was barely mentioned before this), and also helps flesh out how her years of slavery were spent.  It’s interesting that she’s not more traumatized by these events.  It’s clear that her Tales issue was designed to set up future storylines involving her sister and world.

Wonder Girl and Robin – These two were more background characters this time around.  Donna has moved past her treatment at Hyperion’s hands, and she and Dick seem to be settling into their role as leaders and the most experienced members of the team.

It’s interesting to see how George Pérez’s art looks in this volume, as he ends up working with five different inkers who have a variety of effects on how things look.  It’s clear that Pérez is still developing his style at this stage, although his approach to layout stays consistent.

This was a decent enough trade, but I’m hoping the next one will be more to my liking, with a return to longer and more involved stories.