If your idea of a good Saturday night is a pizza in your tummy and classic horror on the TV courtesy of Svengoolie, you’ll be getting a scream with the announcement of Universal Horror Collection: Volume 6. The folks at Scream Factory have crept into the vault to find another four movies that deliver old style shivers. The Black Castle welcomes home Boris Karloff. Cult of the Cobra is a supernatural snake tale. The Thing That Couldn’t Die contains a head in a box. The Shadow of the Cat is a Hammer horror about a feline witness. As summer winds down, this quartet will make you feel an early chill on August . Bonus features will include commentary tracks on all the film so you can get a sense of history. There are also original trailers. Here’s the press release from Scream Factory: 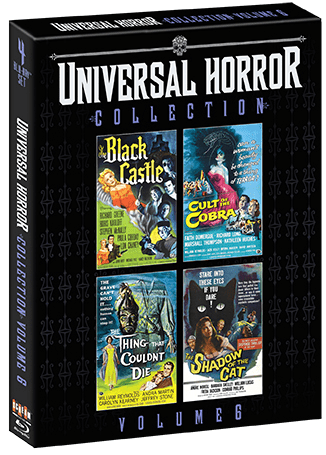 Los Angeles, CA – Scream Factory™ has announced the release of more classic horror films, with the August 25 drop of Volume 6 of the incredibly popular Universal Horror Collection. The set contains 4 films on Blu-ray™, and is packed with new bonus features and new 2K scans of the films.

Universal Horror Collection Volume 6 includes four tales of terror from the archives of Universal Pictures, the true home of classic horror. Boris Karloff stars as a doctor who risks his own life to save the captives of a mad count in The Black Castle. Vengeance is sworn against six men who witness a ceremony where beautiful women turn into serpents in Cult Of The Cobra. In The Thing That Couldn’t Die, when a young psychic discovers a box that contains the living head of an executed devil worshiper … heads will roll! A cat witnesses the murder of her owner … and this cat is hell-bent on revenge in The Shadow Of The Cat.

THE SHADOW OF THE CAT
1080p High-Definition Widescreen (1.66:1)/DTS Master Audio Mono/1961/B&W/Not Rated/+/- 79 Minutes
Special Features:
· NEW 2K scan from a fine grain film element
· NEW Audio Commentary by author/film historian Bruce G. Hallenbeck
· NEW In the Shadow of Shelley – an interview with Barbara Shelley
· TV Spot for the double feature of THE CURSE OF THE WEREWOLF/THE SHADOW OF THE CAT
· Still Gallery