The book opens with a map of what’s left of the multiverse along with a creators’ credits page.

We then begin the story in the Hellscape where Wonder Woman and her allies, including a post Generation Zero: Gods Among Us (now part of the Flash Forward tpb instead of a standalone Free Comic Book Day 2020 effort) Wally West The Flash, a Batman infused talking monster machine, etc.

They are looking for the Batman, but… 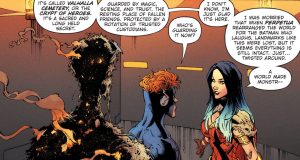 …first theire journey takes them to…

Batman is with them in a crypt…

…looking to resurrect an army from among the dead.

Batman then reveals what’s been eating him to Wonder Woman; that he was wrong about what’s transpired and that he led to the Justice League’s and the multiverse’s loss to Perpetua and the Batman Who Laughs.

Wonder Woman’s plan is to free their friends, but stash Wally West The Flash away since he has the powers of a universe’s Doctor Manhattan. 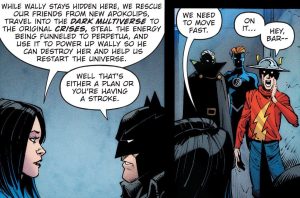 They’ll need a third Flash for that!

We then move to Castle Bat after the Batman Who Laughs was killed in first issue of this mini-series.

A different Doctor Manhattan is there, a Bruce Wayne one actually from the Dark Multiverse,

Well, that all-powerful Doctor Manhattan body is now the new body for the resurrected Batman Who Laughs!

He is still aligned with Perpetua who is attempting the slay the last few Earths left in the multiverse.

After their confab, a demon Robin whispers something to him…

…leading to him becoming the Robin King as…

…the Batman’s Who Laugh’s new persona of the Darkest Knight is revealed!

The book ends in the Arkham Wasteland with our heroes and…

…are Toymaster replicas on the side of our heroes as is… 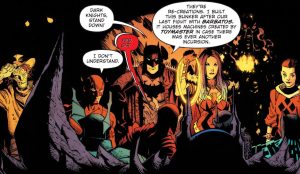 Solid and fitting art trying to make a convoluted yet fun story work. May need to reread a few times to understand the cosmology of it all. Entertaining nonetheless. 7 out of 10.