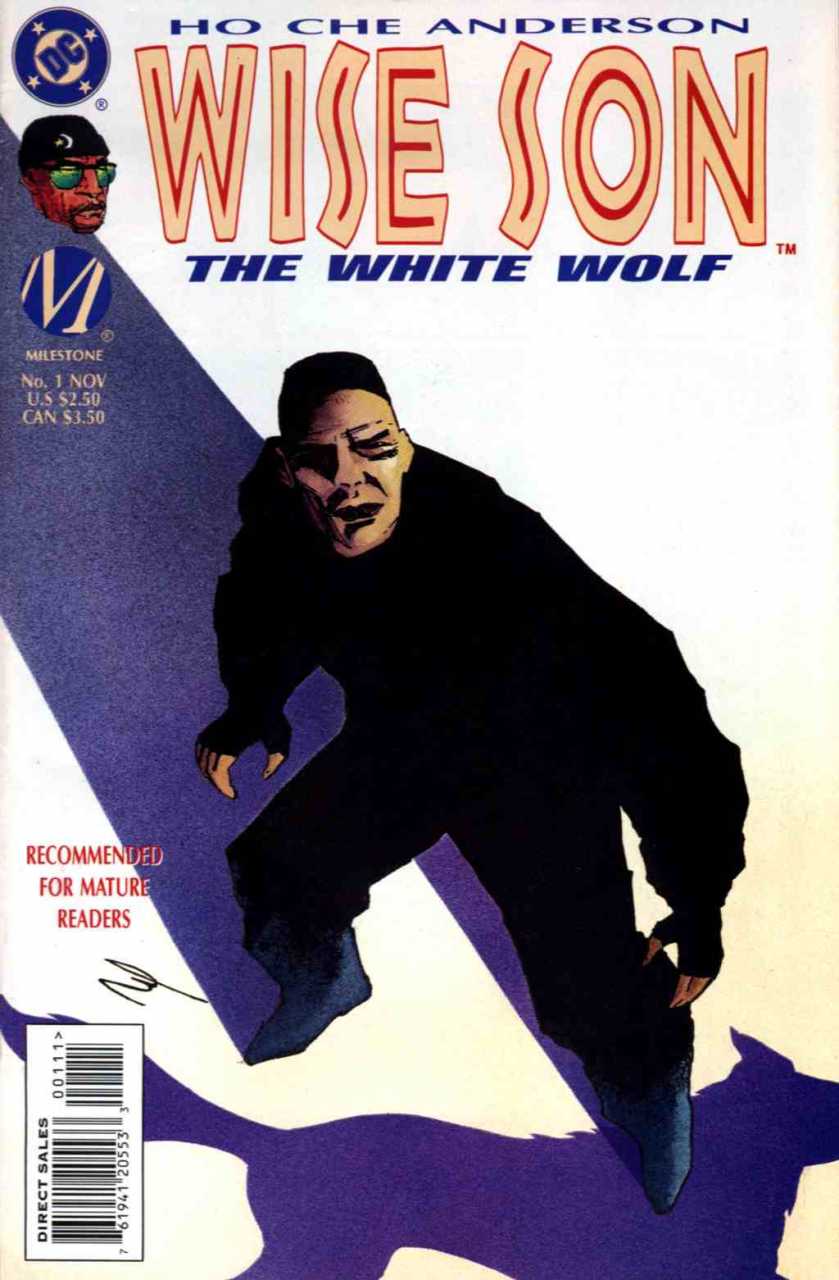 I’m sure that most of us have regrets lingering from the 1990s.  Keeping the focus on comics alone, there is still a lot to regret from that much-maligned decade.  Most of my 90s comics regrets revolve around the choices of books that I bought, but one that I’m slowly working to correct is the choice of books that I didn’t buy.  I have no idea why twenty-year-old me wasn’t into the Milestone books.  They were beautiful, and truly different from anything else on the stands.

At this point, aside from reading the full run of Xombi, and the first trades of Hardware’s and Icon’s books, I don’t know a whole lot about the Milestone universe.  Prior to the lockdown, it was something that I was scouring dollar bins for, with little luck.  I did, however, score a set of the Wise Son miniseries, by Toronto creator Ho Che Anderson.

I know that Wise Son was part of the Blood Syndicate.  That is the extent of the knowledge that I’m going into this with (I learned quickly that his name is Hannibal), and I wouldn’t have it any other way.  I know that this series came after the character was established, but I hope the book is new-reader friendly enough that I can get by.  Let’s find out together…

Okay, this was a lot better than I’d hoped it would be.  I realized from the ads in these comics that by the time this came out, the Milestone line existed of only three ongoings, so the fact that the people in charge would choose to put out this introspective, mature readers title by an artsy cartoonist is pretty impressive and a little strange.

Ho Che Anderson put together an impressive story about the difficulty of being a black man in America, for which the trappings of super powers, and being part of a powered gang, weren’t all that important.  Instead, we got to focus on Hannibal, and indestructible man, physically, having to confront his existential fears and sense of abandonment, while perpetuating that same cycle.  Hannibal is as tough as it comes, but in the weakest kind of way.  He’s afraid to admit how he feels to his family, to his friends, his girl, and to the older couple who run the bookstore.  He identifies as Muslim (or as Nation – I’m not all that clear on the difference in his world), yet can’t bring himself to care when ministers start turning up dead.  He seeks the bookstore man’s approval, yet can’t stop himself from picking fights with him.

Basically, Hannibal is a bit of a mess when this series opens, and by the end of it, he looks like he’s ready to turn his back on the growth that he’s made, instead turning back towards the easier path.  At least, that’s how I interpret him falling back towards the white wolf that has been chasing him through the first two issues, before he started to get control of his life.

What really stands out is all the ways in which this comic could have been written this year.  We have the organized right-wing Children of the Ivory Fist, who are basically a group of Proud Boys, Boogaloos, or whatever other ridiculously named alt-right organization, spouting the same kind of nonsense we hear today.  The Ivory Fist fears being replaced by people of colour, or being discriminated against in favour of them, and their solution to that is, of course, random acts of violence.

This comic came out after the Million Man March, and before 9/11, so in that thin window where America didn’t know what to make of American-bred Muslims in the Nation of Islam.  I feel like Anderson taps into that hysteria, and shows us how lots of people seemed to know how the residents of Paris Island should have been living, but no one was offering actionable solutions.

I found myself very interested in Hannibal’s character.  He’s disrespectful towards women, incredibly selfish, and a terrible father and partner, but you could see his desire to change.  Was it that he was lacking positive role models?  Was the problem inside of him?  It seems like a big deal whenever he wants to cry, which feels a bit dated now, except that so many men struggle with that still.

I like Lark as a character too.  At first, she was portrayed as the sum of a large number of stereotypes and story tropes, but then her strength shone through, and she was compelling.

Anderson doesn’t provide a lot of answers for us.  At times, it feels like he is going out of his way to make this book a little more confusing.  There are times where I found his art hard to follow, but I like the way the style he used in this comic looks.  His work here reminds me of a comic laid out by Denys Cowan, pencilled by Kyle Baker, and then inked by Bill Sienkiewicz.  That, by the way, is high praise.

I was left with a few questions, such as what was going on with Edmund and the mirror (I was expecting a horror comic after the first issue because of that scene), and how old Wise was when he had Edmund, because if he turned twenty in the first issue, he must have been quite young to have a kid that big…

This ended up being a pretty thought-provoking, and prescient, read.  It’s a shame that the Milestone characters aren’t used more, as I think a Blood Syndicate revival would have a lot of potential in today’s climate.  I’m leaving this more determined than before to track down the rest of that series, and to read more Milestone stuff.

It doesn’t surprise me that this was never collected anywhere, but it’s well worth doing some longbox digging for.

What Games Are Good For Practicing Real-Life Skills