Event Series 180?! Avengers Vs. Fantastic Four, But Who Are REAL Villains?

With the above variant cover and the below, Empyre #1 has at least 20 variant covers that I have tracked down.

The Empyre series opens with a dramatis personae…

…as well as a storyline catch-up and creators’ credits page.

We open with the Fantastoc Four and their new… 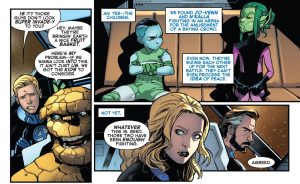 They soon discover, but are discovered themselves, that the new Emperor of the new Skrull / Kree alliance is the Young Avengers’ Hulkling; here‘s why that makes sense.

We then pick up the strings from Empyre #0: Avengers (full spoilers here) and…

…their new alliance with the Cotati, and their leader the Celestial Messiah, and the resurrected former Avengers stalwart, and Hawkeye mentor, the Swordsman.

It also seems that a Cotati weapon has calmed the She-Hulk’s mind and allow Jennifer Walters to emerge.

The Avengers are ready to attack the Kree / Skrull armada threatening the Cotati with the Fantastic Four onboard Hulkling’s vessel.

…that Hulkling is a needed figurehead.

The Avengers believe that Hulkling is naïve to trust the Kree and Skrulls and decided to attack with Ghost Rider making the Quinjet a flaming Ghost Quinget!

…that put him in conflict with the Fantastic Four on top of the attacking Avengers.

The battle, we see cool new armor for Black Panther…

…as the Avengers successful plant a computer virus on the lead ship of the armada impacting the fleet!

…avenging their near extiinction at the beginning of the classic Kree / Skrull War storyline.

They are ready to make Earth the center of their new Empyre!

The book ends with some Empyre concept art.

It also ended with a pre-pandemic Empyre checklist. However, since many tie-in’s have been cancelled, to a tune of almost 15 cancellations, below is the correct Empyre checklist from Marvel.

Amazing art telling a complex yet rather accessible story. A fun and high octane first issue. Interesting twist at the end that will likely see Avengers and Fantastic Four team-up with the Kree / Skrull Alliance against the Cotati. Intriguing. 8 out of 10.