If you’re a parent, odds are high that your kid (or kids) got really into Thomas the Tank Engine. The stories of the little train on an island full of living trains has gone from books to various TV shows. Most importantly are the various toy train lines that can easily overtake a toy space. They even made a movie. Thomas and the Magic Railroad: 20th Anniversary Edition is coming to Blu-ray at the end of September. Mara Wilson plays the little girl who needs to save the day in the magical land. The producers of the movie made the film enjoyable for both little kids and their parents with a bit of creative casting. Sure you get the trains, but more importantly both Peter Fonda and Alec Baldwin being on the screen. There’s Captain America from Easy Rider and The Shadow hanging together. That ought to make any dad happy to press play on the remote. Here’s the press release from Shout! Kids: 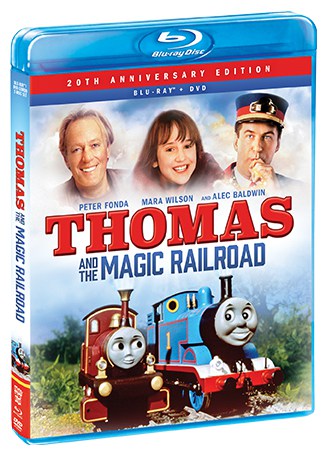 For as long as anyone can remember, the magical Island of Sodor has been the realm of enchantment, innocence, and talking train engines. Mr. Conductor (Alec Baldwin) is taking care of the whole railway whilst Sir Topham Hatt is away.

Mr. C comes from a family of miniature Conductors who travel between the Island of Sodor and Shining Time Station thanks to a supply of mysterious gold dust. However, Sodor’s steam engines suddenly find themselves heading for a load of trouble courtesy of the railroad baddie Diesel 10, whose plan is to destroy our hero Thomas and Mr. C…then take over Sodor before Sir Topham Hatt’s return. Thomas and Mr. C must save the engines before his dwindling supply of gold dust runs out!

Lily (Mara Wilson) has a hunch that her grandfather (Peter Fonda), up in his workshop on Muffle Mountain, can be the one to crack the code that will save the Conductor family… and bring back to life the Magic Railroad, which runs between Sodor and the beautiful Indian Valley surrounding Shining Time. Lily teams up with Mr. C and Thomas and sets out to get Sodor back on track in this beloved, full-length adventure starring the world’s #1 tank engine.

While Thomas And The Magic Railroad celebrates its 20th anniversary, Thomas the Tank Engine is marking his 75thyear as a beloved children’s character. Originally part of the Rev W. Awdry’s Little Railway book series, first released in 1945, Thomas was brought to life through the cherished TV series Thomas & Friends, created by Britt Allcroft (director/writer/producer of Thomas And The Magic Railroad) in the early 1980s. In the late ‘80s, Allcroft and Rick Siggelkow introduced Thomas to America when they created Shining Time Station. Many years on, Thomas’ legacy remains everlasting.