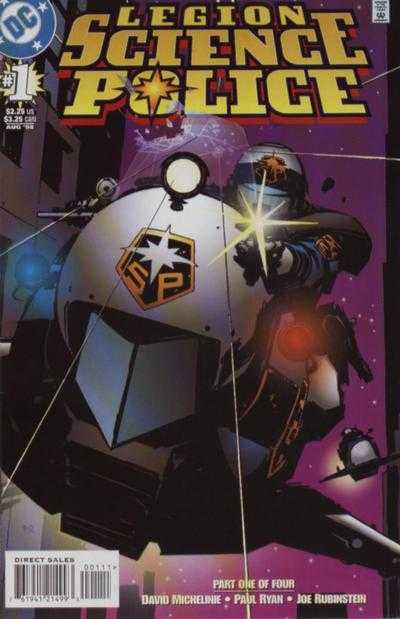 Spoilers (from twenty-two years ago)

Continuing in their new series of Legion of Super-Heroes adjacent miniseries came this Science Police four issue title.  I thought it was odd that they made an Inferno mini, but this is herpes the oddest choice of all.  The Science Police didn’t get a lot of screen time or play in the reboot era.  Where the classic Legion had Officer Shvaughn Erin in a relationship with Element Lad (which was famously turned on its ear in the 5YL era), Gigi Cusimano, with her ties to Colossal Boy and Sun Boy, Chief Zendak, and bumbling Officer Dvron, among others, in the reboot, we only got Shvaughn, and while she was around a lot, she never really did anything.

It would make sense that this series might have been used to further flesh out the Science Police, perhaps explaining why a regular old police force needed the word ‘science’ tacked on the front of it.  Did they actually police science (as we saw when President Chu tried to shut down the Time Institute)?  Do they use science in their policing to a greater degree than say, CSI?  Is it just the case that when the Legion was first created in the optimistic Silver Age, someone at DC thought it sounded futuristic and cool?  Would this miniseries explore that?

I own this series (okay, I somehow missed getting the first issue), and while I remember the John Paul Leon covers, I remember nothing else about this comic.  There’s probably a reason for that, but I guess we’ll find out.

So I have no idea why this series was made.  These Legion miniseries were odd from the beginning, but this one baffles me, not in terms of its story, which is kind of straightforward, but in terms of why it exists.  It’s not exactly a police procedural set in the world of the Legion, which would have been cool.  It doesn’t use any established characters in any meaningful way, but also doesn’t give us characters that would have enriched the Legion mythos.  It doesn’t tap into the rich history of the pre-reboot Legion (how much cooler would it have been had the Ringers been members of the old Legion Academy, like Power Boy or Comet Queen, or to see the classic SP characters like Gigi, Zendak, or even Dvron?).  It doesn’t fit with the current continuity at all (I’ll come back to Imra shortly), and most strangely, it’s as much about The Ringers as it is about the SP, but only one of the Ringers (the white human one, I might add) gets any real character development.

Did David Michelinie owe someone a favor or a contractual obligation?  This reminds me of the kind of thing that recording artists bang out in a weekend when they are almost free and clear of a record deal they regret ever signing.  We can further contextualize this as being released at the same time that Grant Morrison was absolutely killing things on JLA, and as oddball books like Chase and Chronos were pushing the boundaries of DC Comics.  In comparison to much of the line, this felt like a real old school release (the art team of Paul Ryan and Joe Rubinstein, while kind of classic, did not give this a very futuristic feel).

I guess the story is okay, although it’s weird that for one whole issue, the focus is almost entirely on the Ringers, and then they don’t appear for the next one at all, giving the story a choppy feel.  Shadder and Hasteen never really evolve past the basic descriptions of their characters.  Driana is a piece of work, being portrayed as more shallow and self-absorbed than her brother, Gim (aka Leviathan), was when he was alive.

And then there’s this weird thing going on with Imra, aka Saturn Girl.  As this series began, she was the leader of the Legion of Super-Heroes in their books, but also an officer in the SP here?  The coordination between the three titles is poor.  In an issue of Legionnaires (that I believe came out before this series started), Invisible Kid made reference to Imra choosing to strengthen her ties with the SP, and that giving the team the not-really-needed opportunity to borrow some SP gear to get onto Durla in time for the Dark Circle’s invasion.  Here though, there is reference to Imra having left the Legion entirely, although her reasoning is never explained.  The thing is, Imra plays almost no role in this story, and wasn’t exactly necessary to it.

Anyway, I suspect I might be the only person in twenty-two years to even devote this much thinking to this series.  This was the last of the Legion adjacent miniseries of the late 90s, so from here on, I’m going to continue focusing on the main two Legion comics.  It’s now been a year since I started reading all my Legion back issues from 1978 onwards.  That’s nuts.

If you’d like to read these comics, you’re going to have to do some digging.