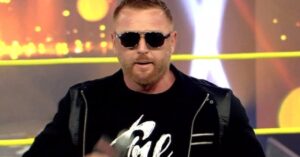 Health Slater aka Heath whose real name is Heath Miller was one of the many WWE superstars released recently.

Although he lost, they left the match as friends despite shenanigans by Dolph Ziggler.

Then, after last night’s Impact episode, looks like Heath gets a TNA Championship title shot next on August 4, 2020 against Moose.

This hasn’t been that bad a month for the now one-named wrestler Heath; although another recently released WWE superstar EC3 has been sniffing around Moose too.