What if I told you there was a film with two Nicolas Cages? That’s right, two of him on the screen at once. What if I told you it was made by the director and writer of Being John Malkovich which featured an infinite number of John Malkovichs? Eighteen years ago Spike Jonze and Charlie Kaufman made a film where Nicolas Cage played Charlie Kaufman and Charlie’s alleged twin brother in a film about orchids and screenplays. Adaptation was a twisted tale of reality and how it gets presented in dramatic form. This is Nicolas Cage’s best roles (two roles) in the 21st Century. Now Adaptation is getting upgraded to Blu-ray in October thanks to Shout Select. Here’s the press release from Shout! Factory: 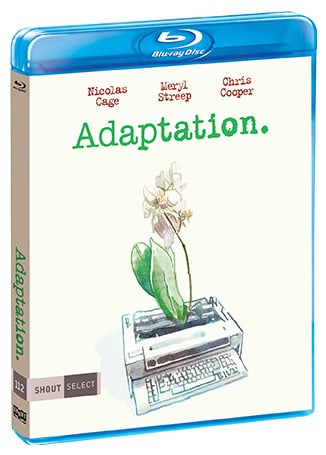 Director Spike Jonze (Being John Malkovich) delivers a stunningly original comedy that seamlessly blends fictional characters and situations with the lives of real people: obsessive orchid hunter John Laroche (Cooper), journalist and author Susan Orlean (Streep), Hollywood screenwriter Charlie Kaufman (Cage), and his twin brother Donald (also Cage). As Charlie struggles to adapt Orlean’s best-selling book “The Orchid Thief,” he writes himself into his own movie. The various stories crash into one another, exploding into a wildly imaginative film. Adaptation, 2002’s most-talked about movie, is at once a hilarious drama and a moving comedy.