Part 1 focused on the search for the Paragons (full spoilers here).

…in a tale called Infinite Luthor.

…that our bearded Luthor can be taken to the Earth 99 and the Council of Luthors.

Even there is a Council of Wells, why not Luthors too?

Anyhow, all the Luthors either see the Anti-Monitor’s multiverse threat as an opportunity for worlds domination and/or killing Superman. While, the DC TV Luthor sees them dealing with Anti-Monitor first as key since there is no multiverse there is no worlds to dominates or Superman to destroy; they need to super-heroes to work for them against the Anti-Monitor. He departs the Council of Luthors with his peers seeing him as a dangerous anomaly.

He heads to Earth 38 and Superman; he plans to force Superman into an alliance, but…

…the Council of Supermen arrives! They are banding together to take on the Anti-Monitor threat.

The DC TV Lex Luthor has been kidnapped and returned back to Earth 99 and a Council of Luthor trial of sorts; he is imprisoned for seeking Superman’s help.

He escapes and goes to back to the Council of Supermen…

…putting him in further odds with Council of Luthors, but he knows the multiverse will all the heroes it can muster to defeat the Anti-Monitor so there are worlds to dominate and Supermen to kill.

The actual DC TV 5 episodes CW Crisis of Infinite Earth cross-over can be viewed on a bonus disc in Arrow Season 8 Blu-ray / DVD and / or the collected Arrow Series on Blu-ray / DVD which both came out in April 2020. 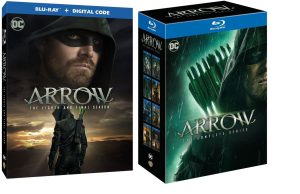 Another fun issue. This one is less convoluted than the first one with a lots of Easter Eggs and fanboy / fangirl moments rendered by solid art. VERY entertaining. 8.5 out of 10.