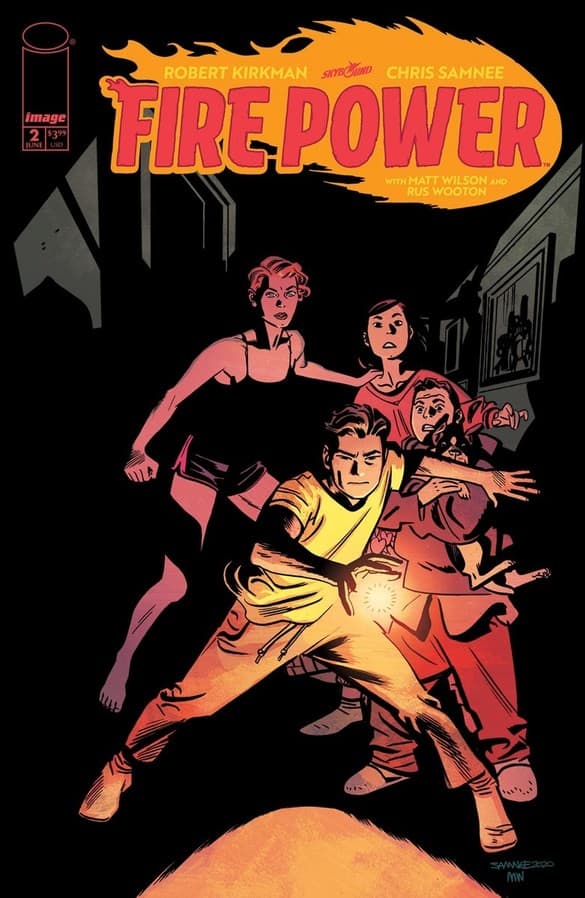 Fire Power #2 – Most of this issue is given over to a fight between Owen and some ninjas in his home, late at night. He doesn’t want to wake his wife or kids, so the fight is kept completely silent, and is easily one of the most exciting sequences I’ve seen in comics in ages.  Chris Samnee is an incredible artist, giving each page a real sense of fluidity and grace.  Writer Robert Kirkman isn’t holding back much either, tossing one of his trademark surprises into the end of this issue (which feels a little early for him – he usually lets a title run for a year before he starts turning things on their head).  I don’t know why I thought I was going to sit this series out – since getting the FCBD first issue, I also read the prelude trade, and now I’m completely hooked on and invested in this book.

Captain America #21 – This title has taken a long time in returning, and I’ll admit that it’s lost some of its momentum in the gap.  Cap, Bucky, and Falcon are undercover in the small town that Selene has built and controls to have access to sad white men she can do her psychic vampire thing on.  At the same time, Lukin attends a slave auction in Madripoor.  This whole Power Elite story has been too spread out, and needs to move a little quicker.

Empyre #4 – This issue makes up for the lack of activity in the last one, as Teddy appears to lose sight of who he really is, and the battle for Earth continues.  There are still some things that aren’t all that clear, like where so many Cotati came from, and why they really want to destroy Earth (or why the Kree and Skrulls think destroying the sun is the best solution).  I think things are veering too far into the usual summer blockbuster stage, where sense is tossed out the window.  Al Ewing does still manage to work in some good character bits (I like Tony’s assertion that he thinks best through building suits of armor), and I’m glad someone decided to go find Wiccan.  I will say that the weekly release schedule helps this series a lot; I think it would lose a lot of momentum if it were coming out monthly.

Empyre: X-Men #2 – It’s strange that this issue has completely different writers than the first one (Gerry Duggan, Ben Percy, and Leah Williams share credits here), yet the story picks up where the first issue (by Jonathan Hickman and Tini Howard) left off.  It’s a good enough issue, with the Hordeculture ladies stealing the show again.  I was surprised, on the last page, to see that the Shadow King is now living on Krakoa – I would think that some mutants just wouldn’t deserve the opportunity.

Far Sector #7 – So my decision to add this series to my pull file last week was a good one, as this week’s issue is, once again, excellent.  Jo figures out that some @at, digital beings, are behind the most recent attack on her, and uses her ring to enter their digital world, with her friend and @at guide, CanHaz.  NK Jemisin uses this issue to build even more layers on the already fascinating world she built, and gives Jamal Campbell license to run wild again with the designs.  We also learn a little more about Jo’s ring, which is not a typical Green Lantern ring.  I’ve really just gotten into this title, and I already know I’m going to be sad when it’s done.

Giant-Size X-Men: Fantomex #1 – I think that Fantomex might be one of the best additions to the X-Men universe to come out of Grant Morrison’s run.  He was always a very cool character, and while other writers have diminished his cool factor some, I was very down to maybe finally get some answers about his current status in this issue.  That didn’t really happen at all, as we were shown a variety of instances of him breaking into the World, with a wide variety of helpers.  The last time we saw much of Fantomex, he ended up giving his body over to Xavier, as X, but now he seems to be back in his own body again.  Was he resurrected by the Five?  More explanation would have been nice, but it’s all good.  Rod Reis was a good choice of artist for this book, and I’m pleased to see that Jonathan Hickman is slowly advancing the story about Storm being sick.

Guardians of the Galaxy #5 – I’ve found it confusing that there are two Moondragons in the 616 now, but Al Ewing confronts that with this issue, as the two Heathers confront one another.  I’m really enjoying the tone, large cast, and general direction of this book since Ewing took over.  I’m hoping he enjoys a long run.  I also like the way artist Juann Cabal plays with layouts in this issue that reminded me of JH Williams and Marco Rudy.  Good stuff.

Protector #5 – I’ve loved this series from Simon Roy, Daniel Benson, and the brilliant Artyom Trakhanov.  It’s a very harsh look at a distant future where a surviving American cyborg makes already complicated ethnic relations more difficult.  This issue brings the series to a close, and while we don’t get all the answers and explanations I was hoping for, we do get a satisfying ending.  Trakhanov’s work in this issue is gorgeous.

Sex Criminals #30 – It’s more or less the last issue of Sex Criminals (there’s an upcoming Sexual Gary oneshot, and then #69), and the story wraps up nicely.  It’s sweet, and a little sad, but also affirming and positive, like so much of this series has been.  It’s not the funniest issue in the run, but I love that this goofy series about people with sex-related superpowers became such a space for conversation and understanding of peoples’ desires and differences.  There were times when I didn’t enjoy this book so much (really, this whole last arc), but I’m thankful for it, and think it’s hugely important.

Star Wars #5 – Here’s another title I’m very happy to see back on the schedule.  This is a Luke Skywalker solo issue (okay, R2 is in it too), as he follows a vision and seeks out a woman he hopes can help him learn more about the Force.  This works more or less as these things always do; the woman runs, and doesn’t seem all that interested in being helpful.  Charles Soule does a good job of tying Luke’s knowledge to the larger Star Wars story, referencing his Darth Vader run.  It’s a good issue.

Strange Adventures #4 – I would happily read an ongoing Mister Terrific series written by Tom King.  I never expected that he would end up being the best character in this comic, as he travels to Rann to continue his investigation, and comes up against Sardath and some very clear Rannian propaganda.  More and more, it looks like Adam has a lot to hide, although the flashbacks are nowhere close to showing us what really happened yet.  I love the structure of this book, and the contrast between Mitch Gerads’s present-day sequences and Evan Shaner’s cleaner flashback sequences.  I’m left wondering if Shaner’s tidier artwork is a clue that what we are seeing has been polished for a reason, and that Gerads’s scratchier, messier work is proof that what he shows us is real.  This book is a great exploration of characters I never cared about before this series.

Undiscovered Country #7 – I wouldn’t really expect many answers in this series, but as the second arc begins, we get to see a few flashbacks to the time when America sealed itself off from the rest of the world, and how Dr. Elgin tried to raise the alarm that the new thirteen zones that made up the USA were working at cross-purposes to one another and Aurora’s ultimate goals.  Of course they were, they’re Americans.  Our group of heroes don’t know any of this yet, as they move into a new zone, where things look very strange.  I was starting to give up on this book, but this issue piqued my interest all over again, and gave me hope that something coherent might be coming. 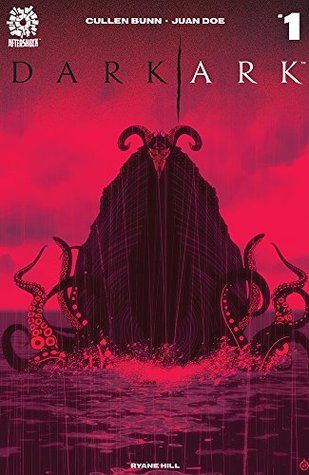 Dark Ark #1-9 – When I bought the set of the first nine issues of this series, I’d assumed they were the whole thing, which apparently is not the case.  Still this was a good purchase.  Cullen Bunn and Juan Doe tell the story of the other ark that floated on the flooded Earth, the dark and secret counterpart to Noah’s.  Where Noah had rescued two of each animal, Shrae, the sorcerer, captained a ship filled with monsters, making sure that evil would continue into the next world.  It’s a cool concept, and filled with uprisings, betrayal, and human sacrifice.  Doe is the right artist for this book, with his wild creature designs.  I’d like to read the rest of this series, and the follow-up one that I think is being published now.  I realize I should have spent more time paying attention to Aftershock’s catalogue…

Firefly #12 – Greg Pak and Dan McDaid do Firefly right.  I probably should have jumped on this series when it started; the lack of cons and stores having sales has hampered my ability to catch up on titles like this.

Spider-Man: Life Story #3-6 – I love the concept behind this series, which examines Peter Parker’s life had he aged properly in each decade since his creation in the 1960s.  Writer Chip Zdarsky doesn’t share more than a bit of each decade, zeroing in on key moments from each era, such as Secret Wars and Kraven’s Last Hunt in the 80s, and the clone storyline in the 90s.  As Peter ages, so does his outlook, and the way superheroes have shaped society.  It’s a very smart approach, and through it all, Zdarsky stays focused on Peter’s sense of responsibility, even as new responsibilities, such as family, present themselves.  The problem with this series is that it was drawn by Mark Bagley (who should have been able to draw the 90s issue alone).  Bagley has never been a favourite of mine, and he does little to nothing to adapt the visuals to each new decade.  As always, his costume designs are terrible, and a number of opportunities to create cool new looks are squandered.  I’d have liked it more had an artist been chosen to evoke the dominant looks of each decade, thereby giving this book a real sense of the passage of time.  Zdarsky’s covers are incredible.

Mulatu Astatke + Black Jesus Experience – To Know Without Knowing – Mulatu Astatke has been making music for sixty years, but his recent output is as good as anything he’s ever made.  The father of Ethiopian jazz joins with the Australian Ethio-jazz ensemble Black Jesus Experience for this fantastic album, which incorporates rap into the tradition on some tracks.  The result is a very solid piece of work that sounds great on a summer afternoon.