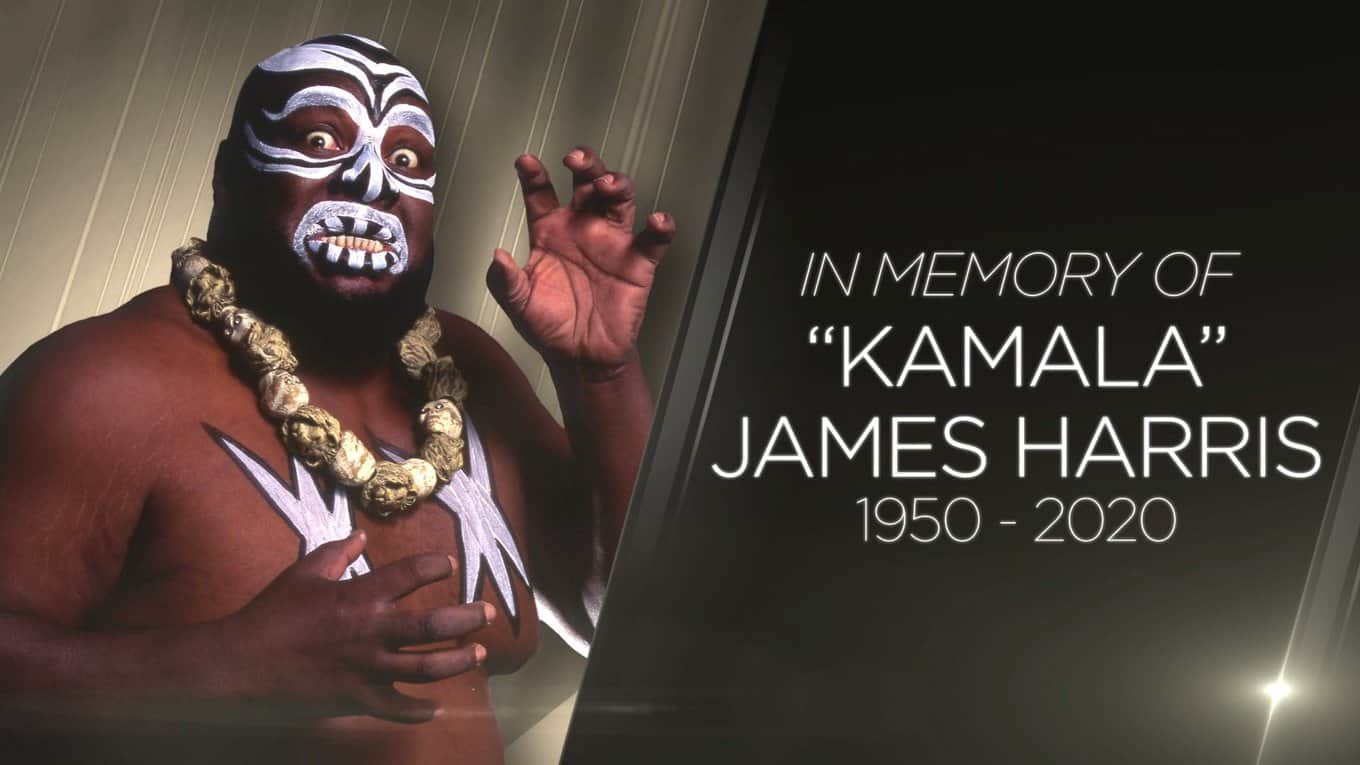 Kamala gets an “in memory of” graphic. Joe brings out Seth and Dominik for a contract signing. Byron talks about Joe not being medically cleared to compete any longer. Joe holds the kendo stick and Seth calls him out for it and Joe talks about Seth getting all angry over the fans booing him every now and then. Seth bitches and moans about making sacrifices and needing to know when it’s enough for people to be happy. Seth tells Dom that he couldn’t last 10 seconds in a regular match, so he’ll do him a favor – so he’ll let him use that kendo stick or anything else he wants. They sign for Summerslam and Seth threatens to take Humberto Carrillo out in their match tonight.

Seth and Carrillo go at it mid-ring and Murphy goes to attack Humberto, but Dom prevents it. Humberto avoids a belly to back superplex, but eats a powerbomb and curb stomp to end it. Murphy jumps Dom and Seth joins in. Time for Rey to return with a new, improved laser beam eyeball and save his son. Nope, he just gets beat up more. Seth has Murphy takes Dom’s shirt off so he can cane him and then canes him more and mocks “Papa Rey”. They tie him in the Andre position in the ropes and cane him from the front and back. This was good, but paled in comparison to the Hogan-David Flair whipping they were going for. Still, this came off as more intense than I thought it would – so it was a net gain and made Dom seem tougher than he did before.

Orton’s legend killing spree is hyped up to set up a Drew vs. Orton video package. Then a recap airs of all the Seth-Dom stuff. Joe says he’s handcuffed at the desk now, but he knows Dom’s got this. A Retribution video package airs and it looks even dumber in hindsight as they worry about THE BOXES. Andrade comes out and Zelina demands his theme be turned off, so someone in the crowd yells “Turn the music back on!” She says that the Street Profits can have the smoke – they just want the tag titles. Dawkins comes out to face Andrade.

A long Big Show Show video airs to presumably make people want to see a C-level sitcom that feels ripped from 1995. Dawkins hits a terrible flurry of punches in the ropes before eating a far better-looking forearm flurry in the corner by Andrade. Bianca takes Zelina off the apron and the Cashout spinebuster hits for Dawkins to set up Zelina vs. Belair later.  Or next. Well, that saves on intros so why not.

They play a game of cat and mouse with Bianca just overpowering Zelina at every turn. Zelina gets an eye poke to survive. Zelina goes for a crossbody, but gets caught and thrown down. Tom goes over what THE EST OF WWE means. Bianca misses a corner charge despite Zelina already moving. Alley oop into the buckle by Bianca and the KOD ends it. Charly asks Bianca if she has proof of Montez getting poisoned and offers no proof, but says Zelina will get whooped…she already did… MVP vs. Crews last week is recapped.

MVP comes out for the VIP Lounge and he blames Apollo for the blinking lights. MVP and Crews trade barbs and Crews says he doesn’t care about Lashley or Shelton – he cares about MVP and at Summerslam, he’ll make his lights go out. Crews tosses…a couch outside the ring. That was cool, and it leads to Shelton vs. Crews. The heels get a bit of an edge thanks to the man advantage on the floor. Crews recovers and gets 2 off the standing moonsault before booting Lashley. This opens the door for Shelton to get 2 off a schoolboy before Lashley attacks and MVP tells him to keep him healthy so he can take the title at Summerslam. I like that, there’s some nice internal logic there. Crews KOs MVP and between this and his new theme, his presentation really feels top-notch.

Tom lets us know that a cinder block was thrown through a glass wall at the PC. THEY THREW A CINDER BLOCK THROUGH A GLASS WINDOW AND THEN…THREW A SECOND ONE THROUGH THE SAME BROKEN GLASS! That sure showed them! Mickie comes back and says that she’s got gold on her mind before Nattie and Lana show up looking out of 1983 and they say that Nattie is the Best of All Time, #BOAT and then Mickie buries hashtags. A Raw Underground video airs to some nu-metal that sounds like it’s ripped from an early-Aughts SmackDown game. Ivar talks to the girl from last week from the Bachelor who they don’t name. She likes Ivar and doesn’t think Ricochet and Cedric are good looking. Also, I think there’s an 8-man tag next.

But first, another recap of the Seth-Dominik stuff from before. Cedric, Ricochet, and the Viking Raiders face Tozawa and his ninjas. This is not how I would use Erik after showing him kicking a bunch of ass in Raw Underground last week. Erik KOs a bunch of ninjas with the rising knee and Tozawa wants a ninja to be sacrificed, but he won’t go – so they just toss him into the Viking Experience to end it. Okay, this was decent-ish. A ninja schoolboys Tozawa and unmasks as Truth before both Tom and then Charly say he got his baby back. Well, that sure makes WWE’s verbiage seem even worse. Drew says he’ll take the torch from Randy at Summerslam and claymore his head off when he makes him realize evolution has passed him by.

Liv comes out with Ruby Riott to face Peyton Royce. The IIconics bury them and pose before Liv throws her down and slugs away. Liv is a low-key decent worker and they fight on the floor before Billie distracts Liv and Billie hits a spin kick. Peyton hits the Deja Vu spinning brainbuster to win it. In Raw Underground, Cal Bloom a and Riddick Moss fight and toss each other into metal things. Cal gets his eye poked and KO punched. Bayley and Asuka are out for their match with Bayley raining down shots early on. Asuka lands a hip attack for 2. Bayley gets a heel hook by countering a kick, and it looks great. Bayley locks her foot in the rope and Sasha mocks her with the Raw belt. Asuka gets a Hana special and turns it into an armbar. Bayley locks on the Terra Ryzing Indian deathlock before Asuka turns it into a kneebar of her own. Bayley mocks her with Kairi’s plank walk, but she runs into an Asuka lock for a tapout – so Asuka will face Sasha for the Raw title on Summerslam.

Arturo Ruas faces some guy and spin kicks him out of the ring then slings him around and slugs him out. Dabba-Kato is back and beats up a dude with sloppy shots before landing a belly to belly. He then grabs him in a dick claw and punches him out. Shayna comes in and Shane wants a fight for her. Shayna takes on three women. Seeing Shayna do fake MMA is really exposing just how stupid this all is. She throws and slugs everyone and then we cut to Retribution standing over an overturned car.

Orton comes out to face Kevin Owens and they brawl for a few minutes before an ad break. Orton tosses him into steps so Flair insults him a bit. Orton goes for a superplex, but Owens shoves him off and swantons him for 2. A stunner is met with RKO for the win. Orton tells Ric it’s time to celebrate – but he needs his friend there. Oh this doesn’t bode well for Naitch. Randy tells Ric that he should be pissed because Ric’s ego put him in this spot against KO.

He grew up with Ric around and for 20 years, Ric has taught him everything he knew and he’s one of the reasons he’s still around. He says that in Illinois, Ric got him out of a jam as only he could. He loved him, but he doesn’t love or respect him anymore because he’s a liability. He knew that Ric wanted him as the son he didn’t have anymore. The Ric Flair he grew up with wouldn’t need a pacemaker and wouldn’t have slipped into a coma. He’s a junkie for the spotlight. Ric says he hears him, but the old Ric Flair is gone. He loves to call Randy the greatest and he loves to be in the spotlight, and at 71 years old, he’s on Raw. He’s got Hogan calling him how it’s like to be on Raw with him. He wants Orton’s approval and he wants to be there when he wins the 14th World Title, and 17th World title – he wants him to beat HIS record, not Cena’s record. HIS RECORD.

Ric wants Orton to do it because he’s crawled from the bottom to the top and he’s the best. He loves being here with him, but you know why he can’t get mad? Because after 31 days of intensive care, and 12 days in a coma, he wanted to tell everyone that he loved them. You have to be as close to death as he was to know that and all he is is Charlotte’s Dad and wants to be part of his life. He ain’t Ric Flair anymore – but he’s a fan of his and he wants him to break his record. They hug and Orton ballshots him and cradles him to the mat while the lights flicker to possibly indicate Orton being behind Retribution. Orton teases a punt and delivers as the lights go out. Now that’s a smart way to do things and tie a couple of different stories together. Drew runs down to make the save for Ric. Well, you’re like several minutes late there dude.