There are even more variant covers on top of the above.

This Darkfather aims for Superman with his anti-life gun…

…as the World’s Finest are fueled by the Black Lantern rings and its power of the dead?!

Elsewhere, Lobo is shooting up Mister Mxyzptlk’s 5th Dimension searching for something.

The Robin King finds the JSA and Wally West the Flash…

In fact, he’s poised to outrun all three Flashes unless the band their powers together!

Elsewhere, DC’s trinity, with Harley Quinn and Swamp Thing, find all of the unaffected super-heroes imprisoned by the Darkfather.

Wonder Woman has an audacious plan to…

…use Wally West to restart the universe and use Jarro (a baby Starro) to shield their plan from the Darkest Knight et al. 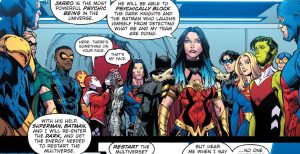 …a scarred Lex Luthor; seemingly the fellow from the opening of the book that destroyed all the Batmen villains.

Another high-octane issue that requires a few reads due to the technobabble and dense word balloons. Still lots of cool moments and dark multiverse cameos in the issue. Art is great, but inconsistent at times. Still a generally entertaining and fun read. 7 out of 10.