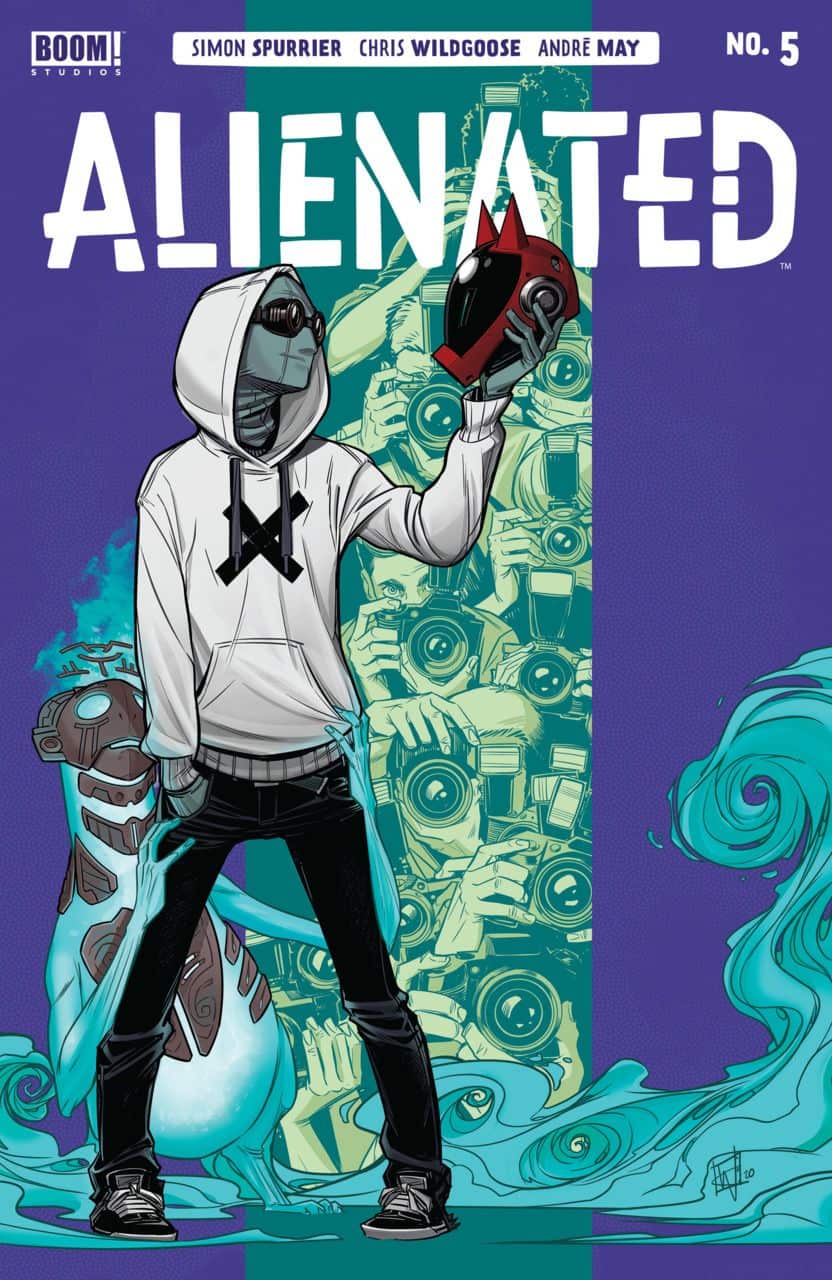 Alienated #5 – I’ve been impressed with this book from the beginning, but I feel like Simon Spurrier and Chris Wildgoose continue to level up with each new issue, especially this one.  We are getting close to the end of this series, which is about three teenagers who end up being psychically connected to one another through an alien entity they find in the woods.  Samir and Samantha have both used the alien to help explore their lingering anger at family or ex-boyfriends, but now Sam has taken control of Chip, and his anger knows no bounds.  This series has been a really good exploration of the minds of young people, and while the other two move towards a better understanding of their place in the world, and their responsibility to it, it’s Sam, the untrusting wounded white cis male who needs to take things too far.  There’s a subtlety to this that I really appreciate, and I highly recommend this book.

Empyre #5 – This issue, unlike some previous ones, is pretty action filled.  We learn why Teddy is acting so strangely, and get to see the Black Panther make a heroic stand against the Cotati in Wakanda (so does Wakanda need to get trashed in every third event for a reason now?).  Al Ewing strikes a better balance between action and character moments (showing us Teddy and Billy’s wedding), while Valerio Schiti continues to make this book impressive, visually.  I don’t see Empyre ever being included as a classic event, but it’s recovering from some early lost ground.

Empyre: X-Men #3 – Maybe it’s the three writers, or that a group of psychic X-Men that are brought to the fight on Genosha appear and disappear at random, or that Nightcrawler apparently can teleport halfway around the globe now, but this issue lost me a few times.  I still don’t entirely understand what the Cotati are doing on Genosha, what the mutant zombies are around for, or what role Hordeculture are supposed to play in this story.  I think the biggest issue is that, at three issues in, we’ve now had 7 or 8 writers telling what is supposed to be a single story, in a big event version of that game people play where each one contributes the next sentence to a tale.  It never works out.

Excellence #9 – I love this series, but I found I got a little confused in a few spots with this issue.  Spencer perhaps overplays his hand in trying to find some information in the Aegis’s library, but what he does find is kind of shocking and further ratchets up the tension in this series.  Brandon Thomas and Khary Randolph are doing the best work of their careers on this book, but it can’t be read casually.

Immortal Hulk #36 – The Leader stirs the pot quite a bit when Gamma Flight comes to take the Hulk in, but Jackie, the reporter, feels that she has a better way of solving things without escalating to more violence.  Al Ewing’s run on this series feels very timely, and continues to be the most interesting take on the Hulk we’ve seen in a very long time.

Marauders #11 – It’s time to finally resolve what’s been happening with Kate Pryde, and her inability to be resurrected in this issue, and Lockheed finally makes his way home.  This is a solid issue, but it’s a little decompressed, and with the massive gap between issues, it was a little difficult to remember all that’s been going on.  I don’t know if it’s necessary to start labelling all the X-books with the “Path to X of Swords” labels…

Oblivion Song #26 – The Kuthaal prepare to invade the Earth, and that gives Dakuul more opportunities to be brutal.  Much of this issue focuses on the Kuthaal, and it’s only in the last few pages that we get to see Nate at all.  Robert Kirkman and Lorenzo De Felici are in the process of switching things up on this book, and taking the excitement to a new level.  I really love this title, which is unpredictable and very cool looking.

Star Wars: Darth Vader #4 – Vader is on a hunt to discover how Padmé hid Luke’s existence from him, and that has taken him to Naboo, where he keeps coming across all the people that knew her in her life, which at this point is at least eighteen years prior.  I keep waiting for someone to raise how weird and inappropriate Anikin and Padmé’s relationship was, given that she was at least ten years older than him and knew him when he was a child, but it doesn’t come up,  Instead, we see some great scenes of Vader fighting monsters and decent people.  Rafaelle Ienco’s art makes this series a must-buy.

Undone by Blood or The Shadow of a Wanted Man #5 – I’m really happy to see that this title will be returning in the future, with a new alternate title, and will continue to draw a parallel between the gunslinger novel featured in the story and the more contemporary main story.  This series, by Zac Thompson, Lonnie Nadler, and Sami Kivelä, has a Stray Bullets vibe to it (man, I miss that series), and that doesn’t shy away from some pretty dark places.  This arc ends with the girl finally confronting her family’s killers, although it doesn’t seem like the retribution she’s been seeking provides her with any real sense of closure.  I’ve been increasingly impressed with Aftershock’s lineup this year, and look forward to more Thompson/Nadler work from them.

Vampirella #12 – One of the cooler things about Christopher Priest’s run with Vampirella has been his use of a cranky psychiatrist, Dr. Chary, as a POV character and frame for the story.  In this issue, as he digs a little more into Vampirella’s mother, Lilith’s, history, he becomes a part of the story.  I still have no idea if Priest is staying faithful to previous runs with this character, or if this is a massive reboot for her, but I don’t really care, as I find this run to be fantastic.

X-Force #11 – The citizens of Krakoa are still dealing with some of the fallout of the first attack that X-Force had to fight off, as the genetically modified soldiers that attacked them are basically Trojan Horses for another threat.  Mixed into this is Colossus’s reluctance to continue fighting all the time.  I like Peter a lot, and it’s nice to see him get some use.  One of my complaints about all of the Dawn of X books is that they don’t leave enough space for character moments and work.  Everyone’s so secure in their immortality, that it’s only the former villains who have any reason to grow as people (this is not just this title, but it’s something I was thinking about as we saw a few more main and secondary characters go down once again).

Dr. Strange: Surgeon Supreme #2-4 – It feels like Mark Waid got the mix right with this newest Dr. Strange series, abandoning his outer space adventures for a focus on Stephen reentering medicine, and having to juggle his duties to his patients with his mystical duties.  Kev Walker is just the right artist for the stories that Waid has chosen to tell, as he has Strange battling a demon that uses tattoos to eat the souls of people, and has Doctor Druid scrubbing in to assist with a demonic suicide bomb.  It’s a very cool take on Strange.

Keleketla! – Keleketla! – Ninja Tune founders Coldcut travelled to South Africa to record this album with a variety of musicians and vocalists, and then added additional music from the London jazz scene and horns from New Yorker’s Antibalas.  The result is a very lush album full of beats and polyrhythms that reminds me a little of the late 90s fashion for globalized electronic music.  Parts of this album sound like vintage Trans-Global Underground, but it comes off as fresh, new, and as impressive as its list of contributors.

Derrick Hodge – Color of Noize – Derrick Hodge first came to my attention as Robert Glasper’s bass player, and while Glasper doesn’t appear on this album, his influence is everywhere.  This is a very nice, chill album.

GoGo Penguin – GoGo Penguin – This British trio deliver once again with their signature spaced out approach to beat-oriented jazz.  This is a great album to disappear into.

Adrian Younge, Ali Shaheed Muhammad, and Roy Ayers – Jazz is Dead 002 – I love the Jazz is Dead series, which has Midnight Hour and Luke Cage soundtrack stars Younge and Muhammad collaborating with jazz greats.  On this one, they work with vibraphonist Roy Ayers to produce some beautiful vibes.