DC Comics Reveals That Batman Lost and Gained A Robin Sidekick In One Week!

It is interesting that the changes to Damian Wayne and Tim Drake happened in the Teen Titans and Young Justice titles when both team books being cancelled in the same month later this Fall.

However, the mystery of what will become of Damian Wayne appears like it will play out in the pages of Detective Comics. We have some thoughts on that though.

I am also hoping some variation of iconic Batman artist Norm Breyfogle’s mock up for a Tim Drake Robin costume (above) may be freshened up for modern audiences for Damian Wayne; although Breyfogle had a few more ideas for a Robin costume.

Although, the future’s Robin Beyond costume (above) looks pretty cool too. 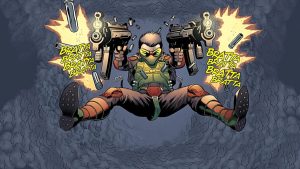 So, we’re no sure what Damian Wayne’s next costume will look like (hopefully not like his short-lived one from the New 52 above), but what about a new nom de guerre?

Damian Wayne, the Son of Batman, is no longer Robin! So, what should he be called now? (Pick up to 3.)

I hope Damian Wayne’s fate is better than the one from the Gene Ha variant cover of 2011’s Batman and Robin #22.

Now that is a chilling cover.