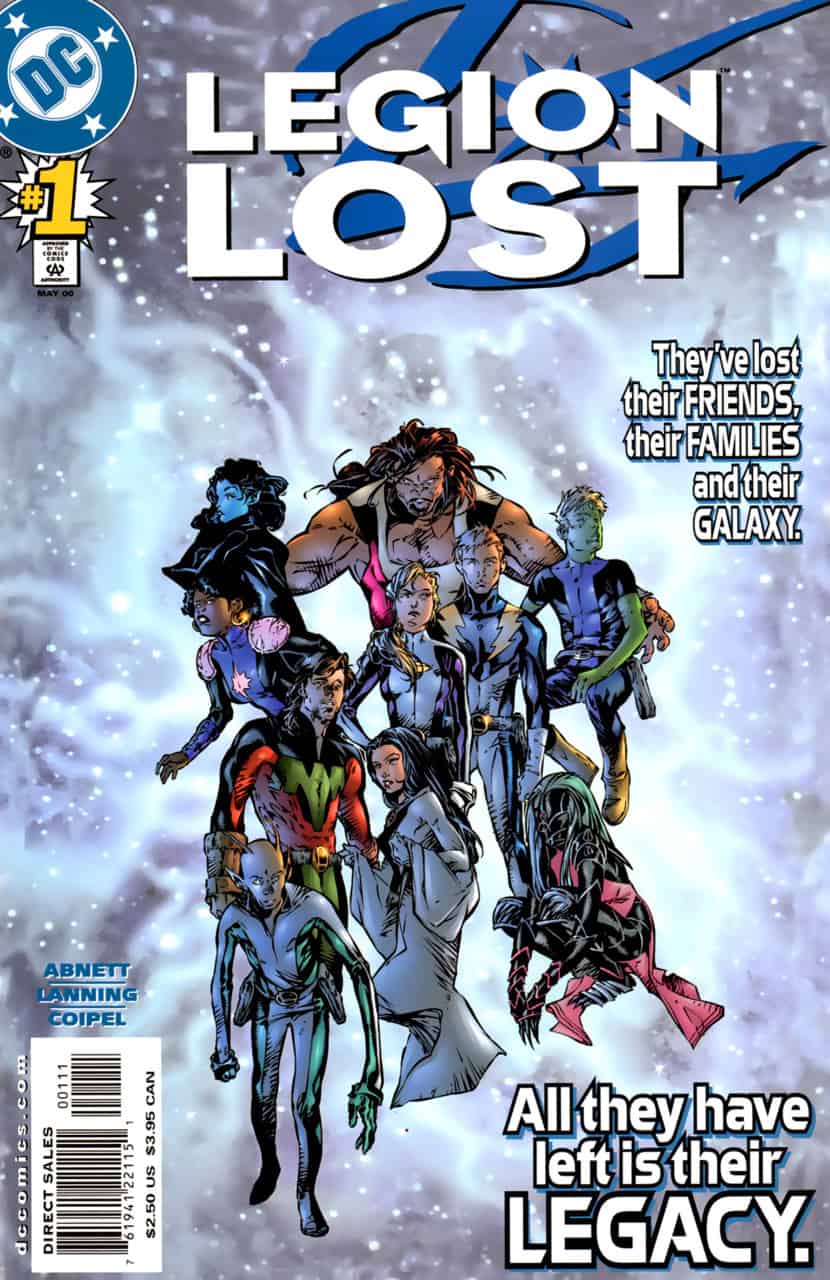 Spoilers (from nineteen to twenty years ago)

The Reboot Legion of Super-Heroes were in a pretty moribund state when writers Dan Abnett and Andy Lanning took over the two series (LSH and Legionnaires) and basically wrecked them.  They had the Earth invaded by some mind-controlling aliens, and in the end, the Legion and their mentor, President RJ Brande took the fall for leading the Blight to Earth in the first place.  The team was suspended, but didn’t even have time to absorb that before the closest stargate to Earth, which was sabotaged by the Blight, exploded, opening a rift in space.  The Legion were successful in closing it, but it appeared that they were all lost in the effort.  At that point, both Legion titles were canceled, and a couple of months later, we got Legion Lost showing up on the stands.

Legion Lost featured a smaller group of Legionnaires, trapped in another place or time, having fallen through the rift.  Olivier Coipel was the original artist on the twelve-issue series (he had some other artists fill in in places), and the book was a huge shift in direction for the Legion.

I remember being very excited to get my hands on this book (I had a lot of trouble finding the first issue), and seeing what happened to the reboot version of some beloved characters.  I was excited to be excited about the Legion, something that hadn’t happened for a long time.  I was also excited about the art, as Coipel was such a breath of fresh air at the time.

I don’t actually remember a whole lot about this title, except that I wasn’t too happy with something that was revealed near the end, but I’ll wait until we’ve gone through the issues together to talk about that.

Well, that’s what I was missing in the Reboot Legion.  This is the first time since the Legion was reborn that they felt like mature characters in a situation that felt dangerous and like it could have consequences.

DnA did a fine job of focusing on character development and interactions, while building suspense and moving the characters in new directions.  After the shock of the Legion of the Damned arc, this series slowed down a little, and helped explore just what the Legion was for, and what they stood for.  By having characters narrate from their perspective, the authors were able to dig into them a loot deeper, which I liked.

It’s interesting to take a look at how the different characters were portrayed, and how they grew across this run.

Art-wise, this book is impressive.  Coipel made the Legion look older and a lot rougher, while also making the title much more visually exciting.  I liked his designs for Shikari and Wildfire, and was generally very pleased with his work.  The alternate artist, Pascal Alixe, grew over his few issues, and by his last pages, his style really fit with the rest of the run.

While reading this book, I remembered being excited about it back in the day, as I reconnected with beloved characters in a way that reminded me of the original run.  When this book ended, I remember being frustrated with the fact that we didn’t get to immediately see the characters return home.  Following this title, there was a six-issue miniseries called Legion Worlds, that visited six planets and the Legionnaires that came from them.  After that, there was the launch of The Legion, by DnA and Coipel.  What’s weird is that I don’t remember a single scene or element of either of these titles.  After The Legion, and more than a year of living with these characters, I’ll be done with this series.